Is ketamine safe for head-injured patients?

You’re called to rendezvous with an ALS unit at an altitude of 8,300 feet in the mountains. On board is an altered male in his 50s or 60s who was witnessed crashing his motorcycle at highway speeds on a windy mountain road.

On arrival, you find your patient altered and extremely combative. No vital signs or blood sugar are obtained secondary to the patient’s combative state. He’s noncompliant with a non-rebreather mask and pulls it off.

The patient wasn’t wearing a helmet and is only wearing jeans with a T-shirt. He’s noted to have multiple abrasions to his right flank, forehead and a deformity to the right clavicle. He’s otherwise moving all of his extremities with normal strength, but isn’t making any sense and won’t cooperate with any commands. You score his Glasgow coma scale (GCS) as 10.

The transport will take 40 minutes by flight over remote mountainous terrain at elevations above 11,000 feet in an unpressurized cabin to the nearest trauma center. You and your partner decide the patient will need to be intubated for airway protection and to facilitate both patient and crew safety during transport.

Your safety, as well as the patient’s safety, is your number one priority. You don’t want to compromise your patient’s airway or ventilatory drive, or drop his blood pressure. Hypoxia and hypotension will only further complicate the patient’s condition, and the 8,000 feet elevation adds even more complexity in terms of oxygenation.

The patient has multiple noted predictors of a challenging airway including being 5’8″ tall and weighing 320 lbs. (145 kg), with large amounts of facial hair. Cervical spinal precautions during airway management will also have to be observed due to the mechanism of injury, increasing the difficulty of endotracheal intubation.

With these factors in mind, you decide to give an induction dose of ketamine intramuscular (IM) first. This will help to safely get control of the patient, better preoxygenation before the intubation attempt and also to gain IV access. The set-up is for a delayed sequence intubation using ketamine and rocuronium.

The ketamine works within 45 seconds of IM administration, at which point, a full set of vital signs and blood glucose is obtained as well as an IV established. The patient is found to have oxygen saturations in the low 80s, and a nasal cannula set at 20 L/min is placed, and the patient’s respirations are assisted with a bag-valve mask (BVM).

Equipment is checked and prepared, including a video laryngoscope, suction and waveform capnography, which is initially attached to the BVM.

The mask is removed and your partner inserts the video laryngoscope with ease, exposes the epiglottis followed by the glottic opening. The endotracheal tube is delivered without any desaturation on the first attempt. Intubation is confirmed with positive waveform capnography and positive bilateral breath sounds.

The patient is immediately placed on the ventilator with appropriate settings, and his oxygen saturation kept in the upper 90s with an end-tidal carbon dioxide (EtCO2) meticulously maintained between 35—45 mmHg, avoiding hyperventilation. He’s given another bolus dose of ketamine–this time via the IV–and started on a ketamine drip with fentanyl for sedation and comfort. The patient’s systolic blood pressure remains in the 120s. He’s transported comfortably on the ventilator for 40 minutes and arrives without incident. 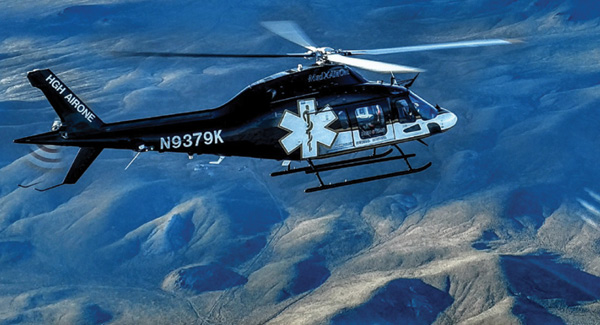 Interventions performed in the first minutes after injury are imperative to the patient’s survival and long-term outcome. Photo courtesy Ryan Hodnick

Upon arrival at the hospital, your patient is comfortably sedated and hemodynamically stable with an oxygen saturation of 100%.

As you are finishing your report, the neurosurgeon arrives bedside and expresses concern over your choice of ketamine for sedation. He’s specifically concerned about ketamine raising the patient’s intracranial pressure (ICP).

You respectfully discuss your treatment choices with the neurosurgeon, explaining to him how your guidelines are evidence-based, up-to-date and that there are studies debunking concerns for increasing ICP in head trauma patients.

The patient is diagnosed with a right-sided subdural hemorrhage, as well as a right clavicle fracture and multiple right-sided broken ribs. He’s taken to the operating room, and a craniotomy is performed to decompress his brain and stop the bleeding. He’s admitted to the ICU and spends a month in the hospital where he makes an excellent recovery.

Unfortunately, the myth that ketamine was contraindicated with TBIs has persisted until relatively recently.

Traumatic brain injuries (TBIs) are commonly encountered in the prehospital setting. In the United States, approximately 2.5 million victims of TBI are seen in EDs each year and, of those, 50,000 result in death and 235,000 are hospitalized. The Excellence in Prehospital Injury Care (EPIC) Traumatic Brain Injury Project shows that interventions performed in the first minutes after the injury are imperative to the patient’s survival and long-term outcome.1

Prevention of both hypoxia and hypotension can prevent further injury to the brain after the initial insult has occurred. Many of these cases require airway protection and good ventilatory support.

Drug choices become important regarding airway management, sedation, analgesia and hemodynamic integrity, as many may cause transient hypotension and/or apnea. Careful drug choices are an imperative part of a good airway management strategy, as well as post-sedation considerations.

Ketamine is one of the few sedation and analgesic drugs that can help prevent drug-induced hypotension and hypoxia when properly dosed. In this case, it served multiple important functions.

First, it served as a means to safely gain behavioral control to facilitate further treatment and assessment without the loss of airway reflexes. Ketamine is well known for its role in gaining behavioral control with preservation of airway reflexes and can be given IV, IM and intranasal or intraosseous, which is very useful as an IV is often near impossible to place in combative patients. Gaining behavioral control allowed providers to perform an accurate physical assessment including complete vital signs and facilitated important procedures in the patient’s treatment course including IV access and placement of an advanced airway.

Secondly, ketamine provides both analgesia and sedation for the patient not only during airway management, but it also provided continuous sedation in the form of a drip.

Third and importantly, ketamine isn’t associated with the transient drop in blood pressure or apnea that’s associated with other drugs such as midazolam (Versed), lorazepam (Ativan) or propofol (Diprivan), making it an ideal drug in this situation.2

So where does the myth that ketamine causes increased ICP come from? In the 1970s there were a series of six studies performed that reported an association with increased ICP. All of this research is comprised of case reports and small case-control studies. These publications were confounded by patients with abnormal cerebrospinal fluid pathways, which included patients with aqueductal stenosis and obstructive hydrocephalus.3 None of these studies directly evaluated patients with TBIs.

Unfortunately, the myth that ketamine was contraindicated with TBIs has persisted until relatively recently. Current studies directly evaluating the effects of ketamine on ICP in TBI patients have debunked this myth, and ketamine now considered one of the best agents to facilitate airway management in the head-injured patient.4

As illustrated by this case, patients who are combative secondary to a TBI are notoriously difficult to manage. Priorities in TBI patients include: maintaining mean arterial pressure (MAP), preventing hypoxia and hyperventilation, and mitigating increases in ICP.5

Ketamine assists in accomplishing these priorities. Ketamine retains the patient’s respiratory drive, doesn’t decrease blood pressure, yields no increase in ICP, and allows for an additional advantage over other sedation medications: behavioral control without apnea.6,7

Furthermore, due to the ability to administer ketamine via IM or intranasal route and the fast onset, control of the patient can be obtained quickly and without the need of IV access.8 Quick control also aids in controlling life threats, like significant bleeding, and allows for complete patient assessment.

Lastly, ketamine has a high therapeutic index that allows some flexibility in dosing necessary when obtaining an accurate body weight isn’t possible.9

What about the TBI patient who isn’t combative? Apart from obtaining control of the patient, the priorities remain the same: maintaining MAP, preventing hypoxia and hyperventilation, and mitigating increases in ICP. The high therapeutic index, and support of MAP and respiratory drive without increasing ICP makes ketamine an ideal choice for TBI.

The success of this patient’s care wasn’t only due to the use of ketamine, but strong basic skills with an effective and timely executed plan. Understanding how medication choices fit into your patient care plan is essential for positive outcomes.

Ketamine should be a strong consideration in a care strategy requiring any or all of the following: analgesia, hemodynamic stability, sedation, combative patients with or without head injuries, and when both patient and crew safety is a concern. The versatility and safety profile of ketamine makes it a reliable tool in the prehospital environment.

The history of ketamine is just another example how weakly supported dogma has limited the use of a safe, reliable, inexpensive medication. As field providers, we must also remember that it isn’t always about the resources you have available, it’s about your resourcefulness and making what needs to happen for your patient happen safely.