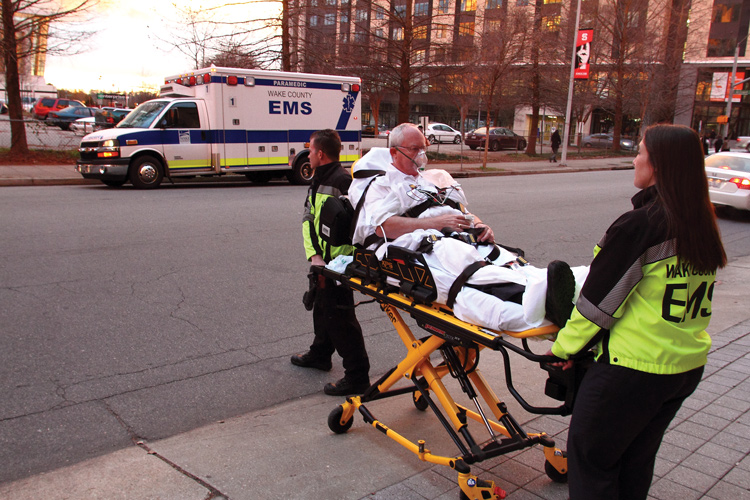 The cascade of inappropriate immune responses to the presence of an infection–AKA sepsis–is the 11th leading cause of death in the United States, resulting in the hospitalization of more than 750,000 patients a year.1,2 The mortality rates for patients in severe sepsis are generally around 20% or higher.3—5

Sepsis treatment goals rely on the groundbreaking conclusions published by Emanuel Rivers, MD, in 2001, describing the concept of early goal-directed therapy (EGDT).6 The basic concept of EGDT is the early administration of fluids and antibiotics and strict hemodynamic management. Later, the Surviving Sepsis Campaign published further guidelines on caring for sepsis patients.

In order to improve outcomes of patients presenting with sepsis, greater emphasis needs to be placed on early recognition and treatment of sepsis in the prehospital setting.

To determine if prehospital interventions could have an effect on the outcome of patients with sepsis, it’s essential to first demonstrate that these patients actually arrive at the hospital via EMS.

A large community-based cohort study in Seattle that looked at cases of severe sepsis found that more than 40% of all severe sepsis patients arrived via EMS, with prehospital care intervals exceeding more than 45 minutes. The study also demonstrated that the crude incidence rate of severe sepsis was 3.3 per 100 EMS patients, which was higher than that of acute myocardial infarction (2.3 per 100) or even stroke (2.2 per 100).3

Other studies have shown that severe sepsis patients who arrive at the hospital via EMS are sicker than those who walk in to the ED.7,8 A study of 311 patients showed that the 51.4% of patients a higher rate of organ failure, but also a shorter time to first antibiotics (111 vs. 146 transported by EMS had minutes) and a shorter time from triage to EGDT initiation (119 vs. 160 minutes). Interestingly, the study also showed benefits when EMS providers specifically identified patients using the term “sepsis”–they had faster time for administration of antibiotics (70 vs. 122 minutes) and a shorter time to EGDT initiation (69 vs 131 minutes).9 A third study showed that simply arriving by EMS improved the ED times of administration of IV fluids and antibiotics.10 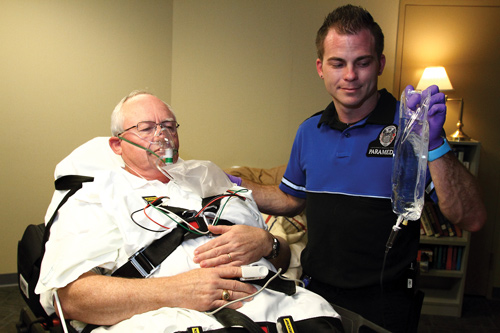 
A study documenting the dangers of delayed antibiotics in the setting of sepsis-induced hypotension showed that for every additional hour after the onset of sepsis-induced hypotension, survival drops an average of 7.6%.11 Similarly, the adjusted hospital mortality odds ratio increases from 1.00 to 1.52 as the time for first antibiotic administration increases from 0 to 6 hours.12

The studies above all suggest that as the first patient contact for many sepsis patients, EMS can play a role in faster antibiotic administration and EGDT initiation, reducing patient morbidity and mortality.

However, with no cost-effective method of checking white blood cell counts in the prehospital setting, there have been a number of other criteria developed to help recognize septic patients. In recent years, lactic acid has been used as a marker for organ dysfunction secondary to hypoperfusion.15 Lactic acid is produced by the body during anaerobic metabolism. Physiologically, when patients are experiencing hypoperfusion states such as shock, they utilize more anaerobic metabolism leading to higher lactic acid levels.

By adding lactate measurement to the SIRS criteria, it provides a method for further distinguishing the sicker severe sepsis/septic shock patients from those with early sepsis by differentiating those patients experiencing hypoperfusion.

For stronger sepsis management in the prehospital setting, it’s important to refine the diagnostic criteria to better categorize patients as having sepsis, severe sepsis or septic shock. One tool for diagnosing sepsis is the Prehospital Early Sepsis Detection (PRESEP) score.16 Like SIRS criteria it includes temperature, heart rate and respiratory rate, but adds systolic blood pressure and pulse oximetry.

Another detection score uses the three vital signs of SIRS criteria and adds systolic blood pressure < 90 mmHg, mean arterial pressure < 65 mmHg, or a lactate level of > to 4 mmol/L as determined by a point-of-care lactate machine.17

However, an amended Prehospital Severe Sepsis Screening Tool has been proposed. It again starts with the three vital signs of SIRS criteria, but also looks at altered mental status, or an elevated glucose > 6.6 mmol/L (~119 mg/dL) in nondiabetics.

With many of the screening tools utilizing lactate levels, one major concern of EMS systems is the excessive cost needed to provide and maintain point-of-care lactate meters across all transport units.

From as far back as 2008 there’s been a growing amount of literature documenting the relationship between end tidal carbon dioxide (EtCO2) levels and serum lactate levels, including their strong inverse correlation in patients with penetrating trauma patients and sepsis.19—21

With such strong evidence linking lactate and EtCO2 levels, it’s difficult to justify the costs of point-of-care lactate meters when EtCO2 devices are already present on many ALS ambulances. 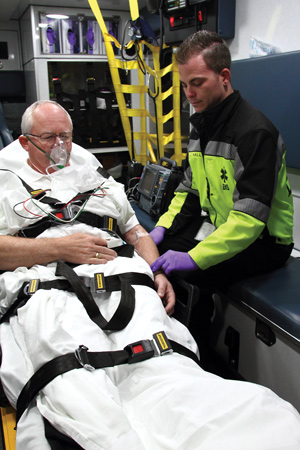 For stronger sepsis management in the prehospital setting,
it’s important to refine the diagnostic criteria to better
categorize patients as having sepsis, severe sepsis or septic shock.

The EMS world must recognize sepsis as a time-sensitive condition similar to STEMI, stroke and trauma, and use prenotification to expedite the in-hospital clinical processes associated with sepsis treatment.

Multiple EMS municipalities have begun utilizing sepsis protocols. In Denver, a pilot study investigated the ability of EMS to recognize and manage severe sepsis. This study utilized prehospital lactate measurement as one method of measuring hypoperfusion. The sample size of severe sepsis patients transported by EMS was 67 patients, and the study found that their EMS agencies only identified 32 of the 67 patients. Nonetheless, using the parameters available to them at the time and the vital signs obtained by EMS, only nine of the 35 missed cases were actually not appropriately recognized by their providers. Therefore, using a sepsis protocol results in a statistically significant reduction in mortality in patients treated.17

The Wake County EMS system, based in Raleigh, N.C., serves an estimated population of 1 million people throughout 857 square miles of urban, suburban and rural areas. The system employs about 350 field personnel and operates 42 paramedic-level ambulances. Annually, there are approximately 90,000 calls for service.

Wake EMS has taken the approach that, given the high mortality rates among patients meeting criteria for sepsis, earlier initiation of fluid resuscitation is essential to improve outcomes. Similarly, with other studies showing the benefit of prenotification in other clinical situations, it was thought that similar benefits may be achieved by notifying hospitals of the septic patients who are sicker and exhibiting hypoperfusion prior to arrival.

On April 15, 2015, Wake EMS initiated a suspected sepsis/septic shock protocol. Part of the difficulty in creating the protocol was establishing how to diagnose patients in sepsis, severe sepsis or septic shock. Although it’s important to catch as many patients as possible who meet severe sepsis or septic shock in this protocol, it was felt over-triage would potentially strain destination hospital ED resources unnecessarily.

Therefore, Wake EMS developed a screening tool similar to the Prehospital Severe Sepsis Screening Tool to focus on capturing as many sepsis patients as possible without leading to over-triage.18

To further characterize the patient as exhibiting end-organ dysfunction, Wake EMS defines a patient in shock as having two separate EtCO2 readings of < 26 mmHg. This then leads to the sepsis alert. (See Figure 1.) 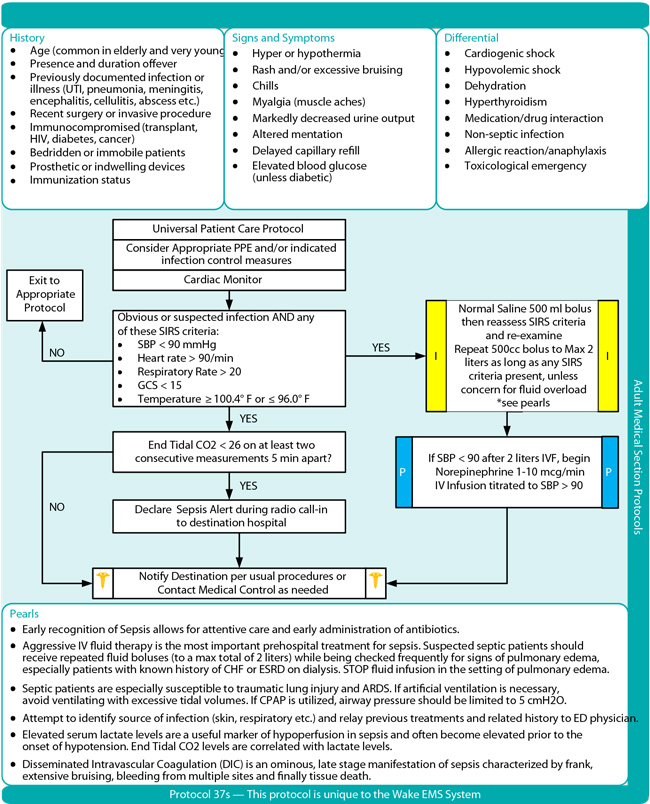 Providers notify the destination hospital of the sepsis alert, then give fluid boluses in 500 mL intervals with reassessment of SIRS criteria and fluid status between each bolus. If the patients’ systolic blood pressure remains under 90 mmHg after 2 L of IV fluids, norepinephrine is started at 1—10 mcg/min with goal of a mean arterial pressure of > 65 mmHg.

The objective is that this protocol will capture the majority of those patients meeting criteria for severe sepsis or septic shock who would otherwise normally exhibit high lactate levels and instead exhibit low EtCO2 and appropriately notify the receiving hospital of these sick patients.

Should this protocol be successful, it might allow jurisdictions to institute a successful sepsis protocol while sparing them the extra expense of a point-of-care lactate meter in every ambulance.

Similarly, it would also spare them from the additional training and periodic calibration of the lactate meters while utilizing the same EtCO2 already used commonly by the providers.

Given the high mortality associated with severe sepsis and septic shock and the potential benefits for early recognition and treatment, EMS should to take a bigger role in initiating sepsis management in the prehospital setting.