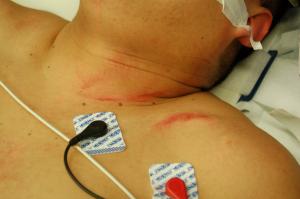 You and your partner are dispatched to a possible cerebrovascular accident (CVA). En route to the scene, you review the mobile data terminal update and are surprised that the patient’s age is 25. Somebody that young is having a stroke?

You arrive on scene to find a young male in obvious distress, with right-sided weakness and trouble forming his words. The family reports he was healthy prior to his involvement in a car crash yesterday. They tell you he refused care from EMS at the time because he had complained only of pain over his left collarbone and neck and thought it was caused by the seat belt. His mother adds that she’s glad he had his seat belt on because “the car was destroyed.”

On examination, his ABCs appear to be fine, but his Cincinnati Stroke Screen is positive for right-sided arm weakness and an expressive aphasia. On secondary survey, you also note deep, linear abrasions over the left side of his neck.

You initiate your normal CVA protocol (administer IV saline at 125 cc/hr, check his blood sugar, place an ECG monitor and place him in a supine position). You also board and collar him due to the motor vehicle collision (MVC) history and his now-evident neurological deficits.

You transport the patient to the regional trauma center, where it’s discovered that he suffered an injury to his left carotid artery that caused his CVA.

The Seat Belt Sign
The seat belt sign — an abrasion/hematoma in an area where the seat belt contacts a person’s body — has classically been thought of as involving the abdomen and possibly the chest. Because the sign marks a potential injury in the underlying cavity, much has been written about examining patients for its presence.

Recently, the importance of the seat belt sign of the neck has come to be considered significant. So, it’s important for EMS personnel to suspect and assess for serious injury when linear abrasions or bruising from the seat belt are discovered on any part of the body during primary or secondary trauma survey.

Finding a seat belt sign should prompt you to perform a more thorough examination. It’s important to recognize that the neck is traditionally immobilized in a rigid cervical collar very soon after a blunt injury, often by first responders prior to the arrival of the ambulance crew. Keep in mind that this might obscure and prevent a thorough exam of the neck. You must therefore visually inspect all potentially injured areas before (or after) they are covered by a device, sheet, blanket, etc.

Neck Anatomy
The anatomy of the neck is complex. In addition to bone and soft tissue, there are many structures that can be injured in blunt trauma. It is, however, the carotid and vertebral arteries that are a concern when a neck seat belt sign is seen.

The vertebrals begin in the root of the neck as branches of the subclavian arteries. They then run cephalad on either side of the neck, passing through the transverse foramina of the first six cervical vertebrae and then into the skull through the foramen magnum. They reunite to form the basilar artery.

The carotid arteries begin in the chest, coming off the aorta, and then ascend on either side of the anterior neck, where they divide into internal and external branches. The internal carotid then goes on to help form the circulation of the brain.

Diagnosing BCVI
Multiple studies over the past decade have discussed the significance of BCVI. It turns out that the number of BCVI is higher than originally thought, mostly due to an increased amount of screening for it.(2) It has also been found that the sequelae of these injuries are worse than originally thought. The incidence of this injury process is between 1—2% of blunt trauma patients.(3-6)

If an injury of this type does in fact occur, the results — usually a neurologic deficit in the form of a stroke — may be devastating. Mortality alone has been described between 25—59%.(3-6,7)

Although the trauma community has known about these injuries for some time, there have been problems determining which patients to screen and how to actually make the diagnosis. External signs or neurologic deficits are usually enough to prompt investigation, but their absence isn’t enough to say there’s no underlying injury.

Additionally, no literature suggests how often this sign exists in relation to a BCVI. So, without external injury or neurologic deficits, the need to develop a policy for screening at-risk patients for BCVI has become paramount.

With the frequent absence of any external signs, patient screening has become the standard. Although no true consensus has been agreed upon, some injuries have been found more likely to be associated with BCVI (See Table 1, p. 34). The common underlying theme behind a BCVI is a high-energy mechanism to the torso, neck and head. From this, some potential screening triggers for BCVI have been developed (See Table 2).

Because of the ultimate need to prevent a stroke, anticoagulation, antiplatelet therapy and vascular stenting (performed in the hospital using a metal tube to hold open a vessel) has become the mainstay of treatment for the BCVI. Although the optimal treatment has also been an ongoing source of research and controversy, outcomes are improved with some treatment rather than none.

Summary
The seat belt sign as it extends to the neck can indicate underlying vascular injury. Existence of a carotid or vertebral artery injury is suggested by multiple injury mechanisms, signs or associated injury. We should have a high suspicion for BCVI when the seat belt sign is found. Failure to do so can result in potentially devastating consequences for our patient populations.

This article originally appeared in April 2010 JEMS as “Neck & Neck: Seat belt sign on the neck is as serious a finding as on the abdomen.”