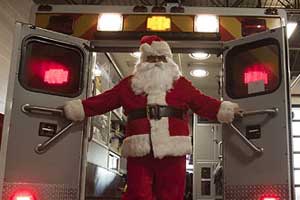 The 7-year-old girl was afraid. Very afraid. A few minutes earlier, she had accidentally knocked down her two-year-old sister, who then went unconscious for a brief time. Her mom called 9-1-1, and within a few minutes, several volunteer ambulance people were in her home, and it was just two days before Christmas. What would happen to her sister? And what would Santa say? After an assessment, the little sister seemed to be doing well, and the mother declined transportation to the hospital. But now the seven-year old was sure that Santa would take her Christmas presents away because of what happened.

Suddenly, one of the nice ambulance people told her that Santa wanted to talk to her. On the radio! Santa’s voice reached out to her over the walkie-talkie, assuring her that he knew what happened was an accident, and he would still visit her house on Christmas Eve. How did Santa know what happened? How did he know to call her on the radio? Well, this was actually one of the first children to talk to Santa through the new Virginia Beach EMS (VBEMS) Santa-on-the-Air program.

VBEMS is composed of 10 volunteer rescue squads with more than 1,200 volunteer professionals and a small cadre of career medics and supervisors who augment the volunteers. The department responded to approximately 39,000 requests for service in 2011 with some of those calls happening during the days leading up to–and even on–Christmas, just like any 24/7 EMS system. And when a child is the patient, or a bystander at a scene during Christmastime, a bad situation can become even worse. After all, the holidays are supposed to be filled with happiness and anticipation, not shattered by an emergency.

That is exactly what happened more than a decade ago, when a VBEMS volunteer found himself at a tragic scene one Christmas Eve.

He had responded to a call at a home when he noticed two young children nearby. They were about 5 and 7 years old and were visibly emotional about what was happening. There were so many strangers in their home, and their grandmother was seriously ill and had to be taken to the hospital.

The volunteer EMT didn’t want the two children to forever remember Christmas Eve as a sad time. The patient was being well cared for by his other team members, so he knelt down to talk to the kids. They were scared and worried about their grandmother, and they also thought Santa wouldn’t be able to visit their home because of what was happening. The EMT did his best to calm and reassure them that their grandma would get better. It seemed to work, but as he drove to the hospital, he wished he could have done more. He knew there were more kids out there spending Christmas Eve in or near a hospital bed.

He was just one person. What could he do? He couldn’t go on all the EMS calls and comfort all the children. Then, in a moment of inspiration, he realized that he didn’t have to be at the rescue scene to be effective. He just needed to be able to talk to the children. The perfect tools to make that idea work? A portable radio, a cell phone and, of course, he’d need someone who was a little more familiar to children during Christmastime.  And so, the Santa-on-the-Air program was born.

The program was simple to set up and costs essentially nothing to operate, but the dividends are priceless and can last a lifetime. First, acceptance of the idea was obtained from the top. When presented with the concept, VBEMS Deputy Chief Bill Kiley and VBEMS Chief Bruce Edwards quickly saw significant value in the program and agreed to support it. With that crucial support, “Santa” spent some time in his workshop to develop the idea and implementation plan.

How the Program Works
Santa-on-the-Air uses a cell phone and a city portable radio that allows Santa to communicate with emergency responders in the VBEMS department, the Virginia Beach Police Department and the Virginia Beach Fire Department. The radio system contains a bank of reserve radio channels that all three departments can access. To obtain this unprecedented access, Santa had to obtain approval from the Virginia Beach Emergency Communications and Customer Service 9-1-1 department as well as the radio team from the ComIT department. Next, the operational period had to be established. It was decided that the program would start on December 22 each year and be available nonstop through noon on Christmas Day.

With the plan’s design in place, Santa promised he would be available via cell phone and radio to speak with children in case of an emergency at any hour of any day or night the program was operating. Santa didn’t have to ride an ambulance or personally go to any scenes (that would be impossible while delivering presents from his sleigh). Instead, Santa could be anywhere in the world, as long as he had the cell phone and portable radio handy. A color flyer was developed and distributed to all the VBEMS volunteer rescue squads and Virginia Beach public safety departments explaining the program, operational period and how to communicate with Santa.

“North Pole 1″ became the established call sign that first responders use when contacting Santa over the radio. The plan suggests that if an opportunity arises, then a provider at the scene secretly phones Santa and gives a quick heads-up about the situation. Although this isn’t required, it sometimes makes the initial radio call to Santa more effective. A first responder on the scene will gather children around the radio and hail Santa at “North Pole-1.” When the familiar “Ho! Ho! Ho!” comes back over the radio, the children (and often the adults too) are amazed. Children are then assisted with using the radio to talk with Santa as he offers words of encouragement in a jolly voice. He never promises specific toys or presents because that would ruin the surprise of what will appear under the tree on Christmas morning.

This past year, one first responder’s call to North Pole-1 was for Santa to talk with 5 and 10-year-old siblings whose mother suffered a fainting spell. The 10-year-old called 9-1-1. The mom’s condition wasn’t serious and quickly improved, and although she refused transport to a hospital, the children remained upset. After several compliments from the team of responders for their bravery, one of them offered to call Santa over the radio. Santa immediately replied with a “Ho! Ho! Ho!” and gave accolades to the two children for calling 9-1-1 for their mother and staying calm while they talked to the dispatcher. The children and their mother were thrilled to hear the personal Christmas greetings and praise.

Another call to North Pole-1 was for a 2-year-old who was having difficulty breathing. The on-scene treatment produced good results, and the little girl was feeling better as subsequent transportation to the hospital began. During transport, the girl’s sprits were lifted even higher when over the radio came the ever familiar “Ho! Ho! Ho!” from Santa. When she was turned over to hospital staff and as the crew was ready to leave, the little girl stopped them and gave each one a heartfelt and tearful thank you. Another memory had just been created.

The thrill of actually speaking with Santa has been so successful in helping reduce the fear and anxiety of many children since Santa-on-the-Air started that its popularity has caught on. During the 2011 program, Norfolk, Va., joined and 20 calls came over the air for Santa. Using radio system interoperability, Norfolk Police and Fire/EMS personnel were able to communicate with Santa from their portables, just like crews in Virginia Beach. For 2012, the program continues expanding and now Virginia Beach will be joined not only by Norfolk FD and PD, but also Chesapeake FD and PD, plus the Hampton Roads Navy Regional Fire/Rescue Service.

During the operational period, Santa keeps a log of the calls and his  report is sent to EMS Chief Edwards. The report becomes a testament to the dedication of one VBEMS volunteer who saw a need and filled it using a very special solution. The name of the longtime VBEMS volunteer who has been the backbone of the program has remained anonymous at his insistence. Let’s just call him “Santa.”