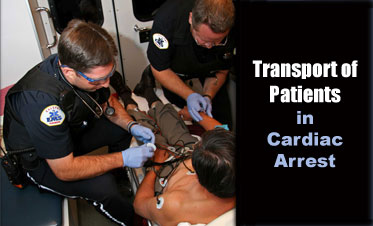 The Science
This study from San Diego County EMS examined the rates of return of spontaneous circulation (ROSC) and hospital survival from cardiac arrest with the goal of determining whether it would be feasible to transport the patients to regional hospitals with specialized post-resuscitative therapies.

They examined their cardiac-arrest data over an 18-month period and found that, of the 1,141 cardiac arrest victims who had ROSC in the field, patients were more likely to survive than those who did not. They also determined the outcomes were similar for patients with ROSC and shorter (seven minutes or less) versus those with longer transport times.

They therefore concluded that survivor primarily had ROSC in the field and that there was no association with transport time and survival. They further concluded that it would be feasible to develop a regional cardiac arrest system with designated receiving facilities.

The Street
No one is surprised to discover the vast majority of cardiac-arrest survivors were those who attained ROSC in the field. Two victims had ROSC in the emergency department (ED), but both died. However, the claim made by these researchers that transport time doesn’t impact survival isn t borne out under closer review. Of all transport intervals, 75% were less than 11 minutes while 25% were less than five. If a regional cardiac arrest system were to be developed, what would the transport times be? That would depend on the number of designated centers.

Before asserting that transport time doesn’t impact survival following field ROSC, we would be better served by comparing this data to a system where the transport time is longer. Unfortunately, those systems are going to have longer response times as well and, therefore, much lower rates of ROSC.

However, if the authors were to continue their analysis and examine those patients with response times of less than nine minutes — preferably with bystander CPR, and transport times greater than 10 minutes — then perhaps we would be more confident in their conclusion.

Whether to bypass the closest hospital in favor of one with greater resources is a difficult question to answer, and I applaud the authors for their attempt. However, before we start designating centers, perhaps we need to determine whether taking an additional five to 10 minutes to reach them will result in delivering fewer viable patients to the ED.