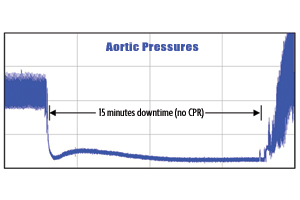 EMS providers, like all medical practitioners, must challenge core beliefs and prove scientifically that our interventions work. I love the fact that Yannopoulos and his colleagues are questioning a deeply held belief that vasopressors (e.g., epinephrine and vasopressin) are the best medications to administer during cardiac arrest.

Using SNP during cardiac arrest would normally be considered taboo because of the profound hypotension associated with manual CPR. But contrary to current thinking, using large doses of SNP during eCPR may not cause a significant decrease in central aortic pressure. Understanding the way aortic pressure is generated during SNPeCPR helps explain why.

Twenty minutes into the resuscitation attempt, mean systolic blood pressure was 73 mmHg in the SNPeCPR group compared with 51 mmHg in the S-CPR group. No animal treated with S-CPR and epinephrine could be resuscitated; however, all SNPeCPR animals were resuscitated.

This small study was done in a controlled porcine (animal) lab and will need to be reproduced in human trials before changes are made in EMS protocols. It’s featured here because it serves to remind us about the role of cutting-edge research: to challenge the status quo and discover new ways to improve.

Bottom line
What we know: ACD-CPR plus an ITD was shown to improve by 53% long-term survival from cardiac arrest with favorable neurologic outcome (see the ResQTrial featured in January 2011 JEMS at www.jems.com/article/resqtrial-study-reveals-high-c). ITDs must be applied early to be effective.

What this study adds: A combination of drug and device therapies, such as SNPeCPR, may extend the window of opportunity for resuscitating patients.

What Makes a Good Mentor?
Cho CS, Ramanan R, Feldman MD. Defining the ideal qualities of mentorship: A qualitative analysis of the characteristics of outstanding mentors. Am J of Med. 2011;124(5):453—458.

Many researchers in medicine believe the strongest studies objectively measure results with quantifiable values and statistics. Qualitative studies can be just as valuable. This one comes from San Francisco, where medical school researchers examined 53 letters of recommendation for a prestigious lifetime achievement award in mentorship. Preceptors may want to take particular note of this study.

The authors followed a process to identify the most commonly described characteristics of ideal role models. They report that top mentors are enthusiastic, compassionate and selfless. Mentors invest time and tailor support for their mentees and are role models for good patient care with high standards. These are definitely qualities we should all be striving to achieve.

Watch Box
Look for the full results from Grant S. Lipman, MD, and co-authors, who reported at the Society for Academic Emergency Medicine scientific assembly that ibuprofen prevents the occurrence and severity of high-altitude illness. Another paper to watch is from a group at Hennepin County (Minn.) Medical Center. The authors showed in a prospective observational study that vital-sign changes aren’t associated with the degree of pain severity.