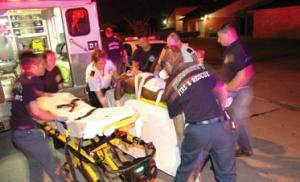 Las Vegas Fire Department and American Medical Response units were dispatched to a residence just off the Strip for a reported unconscious person. On arrival, they found a 50-year-old male unresponsive on a couch in the home. The home was in disarray, and the windows and doors were open.

Suspecting an apparent opiate overdose, paramedics administered 4 mg of naloxone (Narcan) per protocol. The patient immediately awoke and became extremely combative and agitated. Because of the subsequent agitation, the crew administered 5 mg of midazolam (Versed). When his agitation persisted, the crew repeated doses of IV midazolam until all available midazolam on both ambulances was depleted. The patient was then restrained in a supine position and transported to Las Vegas University Medical Center (UMC). A Las Vegas Metro Police officer rode in the ambulance with the patient. On arrival at UMC, the patient was somnolent and had a nasal trumpet in place.

The patient was immediately assessed and found to have a pulse of 148, respirations 30, BP 122/71 and rectal temperature of 108.1° F. His Glasgow Coma Scale was 9 (eyes 3, verbal 1, motor 5). He was confused and intermittently combative. Additional doses of naloxone were administered without apparent effect. Subsequently, rapid sequence induction (RSI) was carried out and an endotracheal tube was placed and secured, and mechanical ventilation initiated.

To treat the patient’s severe hyperthermia, hospital staff applied an external cooling blanket. However, it was relatively ineffective, and the patient’s temperature rose to 108.3° F. Ice was then packed into the patient’s groin and axillae and around the head.

An orogastric tube was placed and gastric lavage was started with cold normal saline. At the same time, a Foley catheter was placed, and continuous bladder irrigation with cold saline was initiated. Despite these measures, the patient remained dangerously hyperthermic.

Bilateral chest tubes and a peritoneal lavage catheter were placed by the emergency medicine residents, and cold pleural and peritoneal irrigation was begun with cold, sterile normal saline. This resulted in a prompt drop in the patient’s core temperature to 101.1° F. Active cooling measures were then terminated, and the patient was transferred to the ICU. Lab tests revealed a positive drug screen for opiates and methamphetamine. Lactic acid was markedly elevated at 4.0 mEq/L (normal being 0.7—2.1 mEq/L).

The patient’s 16-day hospital stay was complicated by pneumonia and diabetes-related problems. However, he was discharged in good condition.

The paramedics in this case handled the situation properly. They found an unresponsive patient with decreased respirations and pinpoint pupils. Empty bottles of prescription opiates were at the scene. These and the patient’s symptoms all pointed to an opiate overdose, and they therefore properly administered naloxone.

Unbeknownst to them, the patient had also binged on methamphetamines. Reversal of the opiate effects with naloxone resulted in unopposed stimulant effects from the methamphetamines to manifest as altered mental status, psychomotor agitation, combativeness and sympathetic hyperstimulation (tachycardia, mydriasis, hyperthermia)–a condition known as “excited delirium syndrome” (ExDS).

The paramedics appropriately administered the anxiolytic/hypnotic agent midazolam. However, because the patient’s methamphetamine-induced ExDS was so severe, it took all available doses of midazolam on both the fire department and AMR units to sedate the patient for transport. Sedation was necessary to aid in mitigation of many of the adverse effects of ExDS.

This case was a fairly typical presentation of ExDS, which was originally described in 1985 and found to result from cocaine intoxication. It has four components: hyperthermia, delirium with agitation, respiratory arrest and death.

Patients with ExDS can display significant physical strength (similar to PCP intoxication) and can develop cardiopulmonary arrest. Risk factors for ExDS include young age, being male, obesity and history of stimulant abuse–most commonly cocaine and amphetamines. However, all stimulants, including MDMA (ecstasy) and LSD (acid), can cause the condition. Other conditions associated with ExDS include psychiatric illness, alcohol withdrawal, head trauma or a combination of the three.

Initially considered somewhat controversial, ExDS was recently recognized as a new and novel disease by the American College of Emergency Physicians (ACEP). ExDS is most commonly seen in conjunction with abuse of stimulant drugs. It has been estimated that approximately 8—14% of people with ExDS die. Diagnosis should be considered in patients who exhibit the triad of delirium, psychomotor agitation and physiological excitation.

The case presented here demonstrates the classic triad of findings described above. However, following control of the airway and stabilization of cardiopulmonary status, the severe hyperthermia was the most life-threatening complication and required rapid intervention.

Although the exact physiologic cause of severe hyperthermia in stimulant abuse remains unclear, evidence points to an increase in the neurotransmitters norepinephrine, dopamine and serotonin. These agents play an important role in controlling the hypothalamus–the major control center for body temperature. Prompt lowering of the body’s core temperature is necessary to prevent permanent injury to the brain and other essential structures.

It’s been proposed that many deaths that occur in ExDS are due to fatal dysrhythmias. Also, profound acidosis is typically seen in these patients and may be one of the causes of the fatal dysrhythmias described. In one study, five patients with excited delirium were found to have a pH that ranged from 6.25—6.81 (normal 7.35—7.45). Four of these patients subsequently died. The elevated serum lactate in this patient was consistent with the severe lactic acidosis often seen in ExDS. Lactate is the anion of lactic acid and can be easily and rapidly measured. Serum lactate levels have been shown to be a reliable predictor of shock and mortality. Technology may soon be available for measurement of lactate levels in the prehospital setting.

When ExDS develops, medical providers should begin to mitigate the potential for further injury. If the patient is agitated and combative, anxiolytic drugs will help allay anxiety and agitation. Neuroleptic drugs (e.g., haloperidol, chlorpromazine) should be avoided because they can sometimes worsen hyperthermia. If restrained, patients should not be allowed to struggle against the restraints because this may worsen their lactic acidosis. Occasionally, severe hyperthermia will complicate ExDS, as it did in this case. This must be aggressively addressed to prevent permanent brain injury and death. Passive cooling (facilitating the body’s inherent cooling mechanisms) is often ineffective, and active cooling (the application of cold substances to the body) is usually required. Once the core temperature begins to fall, cooling measures should continue until the core temperature is approximately 2° F above the projected normal body temperature. Overcooling can cause shivering and a rapid rebound of the core temperature.

ExDS is a potential complication of stimulant abuse. Although many patients with this condition will die despite proper emergency care, all providers should treat it aggressively. Always be alert for life-threatening complications of ExDS, including severe hyperthermia, profound acidosis and dysrhythmias. EMS systems must have protocols in place for the use of restraints and for the treatment of ExDS. The mortality and morbidity of ExDS can be reduced only by prompt recognition and aggressive treatment. Cooperation and communication between EMS personnel and emergency department staff is essential to this process. JEMS

Michael L. Epter, DO, FAAEM, is assistant professor of emergency medicine at the University of Nevada School of Medicine and director of the Emergency Medicine Residency Program.

Bryan E. Bledsoe, DO, FACEP, FAAEM, is clinical professor of emergency medicine at University of Nevada School of Medicine and director of the EMS Fellowship Program.

Editor’s Note: This is the first article in a four-part series that will present interesting and unusual cases from the University Medical Center (UMC) in Las Vegas. UMC is a Level I Trauma Center, a Level II Pediatric Trauma Center, a Regional Burn Center, an Accredited Chest Pain Center and a Certified Primary Stroke Center. It’s the primary teaching hospital for the University of Nevada School of Medicine.

Chill Factor: Why the hottest thing in EMS is cold

0
This clinical review feature article is presented in conjunction with the Department of Emergency Medicine Education at the University of Texas Southwestern Medical Center, Dallas.