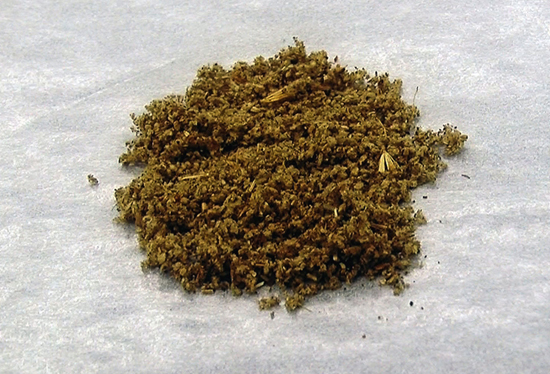 Synthetic cannabinoids (SCs) are a large family of man-made chemical compounds functionally or biologically similar to natural cannabinoids. They produce marijuana-like effects from binding to cannabinoid receptors in the central nervous system (CNS) and have sometimes been referred to as “fake pot,” “legal weed,” “new marijuana” and “legal high.” These substances are marketed to teens and young adults and have become the second most-abused illicit substance in the United States after marijuana.1 They appeal to young people because they’re relatively inexpensive, easily available and aren’t detectable on routine drug screens.2 There’s also a major misconception that these drugs are natural, legal, safe and produce less adverse effects than marijuana.3

These new “designer drugs” are often sprayed on inert plantlike material or herbs, such as vanilla, honey and honeyweed, and it’s unknown what psychological and physiological effect the combination of ingredients may elicit.4 These products have been marketed as “herbal incense products” or “potpourri” and have been labeled “not for human consumption” or “for aromatherapy use only” in order to bypass federal Controlled Substances Act regulations. Their ingredients aren’t identified in product labeling and even when they are, the listing is often inaccurate and doesn’t mention the inclusion of an SC. They’re available from international stores via the Internet or in gas stations, head shops, smoke shops and other retail outlets in the U.S., although state and federal regulations are increasingly limiting where SCs can be sold.5

SCs haven’t been tested in humans and there’s no information on the pharmacokinetics and pharmacodynamics of these drugs or on their short- or long-term mental or physical effects. There’s no consistency in manufacturing processes and the potency of these compounds has been noted to vary from dose to dose, even within the same batch.1,4

SCs have been found to contain other substances, including phenazepam, a benzodiazepine; metabolites of tramadol; cannabis; kratom; and Salvia divinorum, among other things.1 Some products have contained large amounts of vitamin E, which can add to SC’s neurotoxicity or beta-agonists to increase cardiac toxicity.6 Further, there’s no data on the effects of SCs when used in combination with other illicit drugs or alcohol.

Statistics
The Drug Abuse Awareness Network is a public health surveillance system that monitors drug-related ED visits in the U.S. The organization started tracking SC abuse in 2010 and found it was linked to 11,406 out of 2.3 million ED visits that year. SCs were also the sole cause for 59% of ED visits for patients ages 12—29. When comparing marijuana users to SC users, SC users tended to be younger, more often male and more likely to involve monosubstance abuse.7

Poison centers first started receiving reports of SCs in 2009.8 According to data from the American Association of Poison Control Centers, there were 2,643 reported SC exposures throughout the country in 2013, down from 5,230 the year before.9 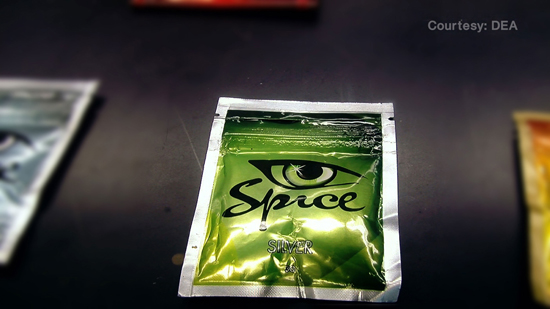 At a large urban teaching hospital, 14% of residents and attending emergency physicians mistakenly thought SCs were obtained from a pharmacy or were prescription medications.

Knowledge Gap
Healthcare professionals, especially emergency medical personnel, are often unfamiliar with designer drugs such as SCs because of their novel chemical names and ever-changing composition.10 In a self-administered Internet-based survey of residents and attending emergency physicians at a large urban teaching hospital, the majority of those surveyed hadn’t heard of Spice (66%) or K2 (51%), both of which are nicknames for SCs.11 In fact, 14% mistakenly thought SCs were obtained from a pharmacy or were prescription medications. Even among emergency personnel who were familiar with SCs, 25% didn’t realize these were synthetic compounds. Also disconcerting was that about half (47%) of clinicians weren’t aware that anxiety, sedation or psychosis were possible adverse effects of SCs.

It’s evident emergency personnel are treating patients exposed to SCs even though they possess very little knowledge about these substances. Further, those clinicians who were least familiar with SCs ordered more laboratory tests and were more likely to admit drug abusers to the hospital. Disturbingly, emergency personnel obtained knowledge about SCs from nonmedical sources, such as lay publications or patients, 72% of the time. Recognizing their limitations, 80% of those surveyed didn’t feel prepared to manage patients exposed to SCs, and 92% felt more education was needed about SCs and other emerging drugs of abuse.11 This survey clearly identified the problem faced by emergency personnel to keep abreast of novel drugs of abuse and evolving reports of adverse effects and complications associated with these little-known compounds.

Overview of SCs
The endogenous cannabinoid system is comprised of cannabinoid-1 (CB1) receptors and cannabinoid-2 (CB2) receptors. CB1 receptors are found primarily in the brain and central nervous system and are responsible for the psychoactive effects of tetrahydrocannabinol (THC) and SCs.1,4 CB1 receptors are also found to a lesser degree in the gastrointestinal tract, lungs, kidney, the pituitary, reproductive organs and the immune system.12 CB2 receptors are primarily located in the immune system, especially leukocytes and macrophages, and in the periphery (spleen, thymus and tonsils). SCs are also thought to modulate gamma aminobutyric acid, serotonin and monoamine oxidase in the brain. Some SCs interact with both CB1 and CB2 receptors; the potential long-term harmful immunological effects of affinity to the CB2 receptor is unknown.4

Whereas THC is a partial agonist at CB1, SCs have been found to be full agonists at this receptor and therefore, produce a more intense effect. There’s no ceiling effect for the dose-response curve among full agonists.13 Most of the SCs fall within four types: aminoalkylindoles, cyclohexylphenols, benzoylindoles and classical synthetic cannabinoids, which are structurally related to THC.4 Some have a four-time higher affinity for the CB1 receptor as well as a 10-fold higher affinity for CB2 than THC, while others have an even greater affinity for CB1 and are 28 times more potent than THC. The highly potent HU class of SCs binds to both CB receptors and is 100—800 times more potent than THC.14

The most common route of self-administration of SCs is via inhalation or oral ingestion.15,16 Upon inhalation, effects of SCs are experienced within 5—10 minutes. Immediate psychoactive effects involve mood, cognition, behavior and perception.17,18

Many liken the subjective effects of SCs to marijuana. But unlike marijuana’s mild symptoms, SCs are associated with severe adverse effects.2,16 In a survey of SC users, participants reported more negative and hangover-like effects, more paranoia, and a shorter duration of effect.18 These substances may have biologically active metabolites, which may potentiate or prolong their effects.19 Agitation, seizures, hypertension, emesis and hypokalemia are acute toxicities, which appear to be unique to SCs as opposed to marijuana. In addition, tachycardia, hallucinations, minor elevations of glucose and vomiting are other common adverse effects seen with SCs. To complicate matters even more, some SC products contain more than one cannabinoid or may have more than 10 herbal additives.20,21

Effects gradually wane in about six hours in most patients, although the duration and intensity of effect varies with the particular SC.22 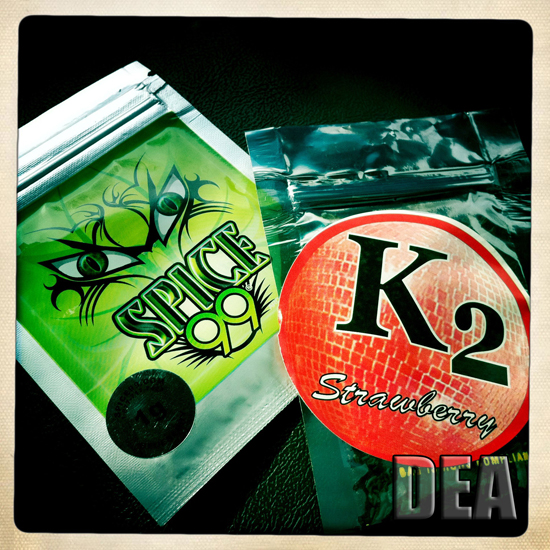 Common nicknames for synthetic cannabinoids include “spice” and “K2.”

Psychosis involves both new-onset cases as well as reemergence of symptoms and can last more than 5—8 months. However, in most cases, psychotic behavior lasts from a few days to about a week.12 Psychotic symptoms occur in up to 69% of SC users.2 Memory changes have been reported by 100% of SC users in one case series.28

Marijuana has also been associated with the development of acute psychosis.1 There’s growing evidence that marijuana use during adolescence may lead to an increased risk (up to 2—3 fold) of later developing schizophrenia or psychosis.4,29 Schizophrenia may also have an earlier onset among those who frequently abuse marijuana by 2.7 years.30

Seizures have been reported among 3.8% of SC exposures based on reports from U.S. poison centers and represent the most commonly associated severe effect of SCs. These seizures may be due directly to the effects of SCs on the CNS or secondary to epileptogenic contaminants.23

An ST-elevation myocardial infarction (STEMI) occurred in three separate cases in 16-year-old male adolescents following the use of an SC. These patients didn’t have a prior cardiac history but presented with chest pains within days of using SCs.31 All of these teens survived, however, a myocardial infarction in a 58-year-old man who had recently used SCs proved fatal.23 Most patients (about 60%) who abuse SCs present with tachycardia. Hypertension is quite common, occurring in over 60% of patients.32 Deaths have been reported from SCs, secondary to either suicide, cardiac complications or seizure activity.1

Although users of SCs are primarily male, women of childbearing age are at particular risk from using these substances as the endogenous cannabinoid system is present in early neural development. Use of marijuana during the first four weeks of gestation is associated with an increased risk of anencephaly.

Clinical Management
Emergency medical personnel need to have a high index of suspicion for the use of SCs in any patient acting bizarrely, especially in the absence of a psychiatric history.13 Indications to suspect the use of SCs include: presentation of signs and symptoms consistent with marijuana use, but with a negative urine screen; persons routinely undergoing urine drug tests; and patients with an otherwise unexplained sudden onset of psychosis.17

The initial management of SC intoxication is generally supportive as there’s no antidote. Immediate and life-threatening complications involving airway, breathing and circulation should be addressed. The most serious immediate effects are anxiety, agitation, loss of consciousness and tachycardia.25 In the majority of cases, symptoms are self-limiting. In about 78% of SC users, clinical effects last fewer than eight hours.23

Treatment is symptomatic including IV fluids and correction of any metabolic abnormalities; benzodiazepines, especially long-acting agents for agitation and restlessness; diphenhydramine for dystonia; supplemental oxygen; and antiemetics for nausea and vomiting.6,23,30 Care should be exercised when administering antipsychotics as these drugs can lower the seizure threshold, which may already be reduced by the SC.13,14 Antipsychotics may be indicated when the patient presents with psychosis associated with agitation or aggression, the patient has a history of a psychotic disorder, or the psychotic symptoms aren’t subsiding spontaneously or with supportive measures.17 Use of physical restraints may be warranted if there’s imminent risk of harm to the patient or to medical staff.13

Routine laboratory testing includes a complete blood count, metabolic profile, serial cardiac enzyme if chest pains are present, urine toxicology to rule out other substances of abuse, and creatine phosphokinase and myoglobin if rhabdomyolysis is suspected. Electroencephalogram is warranted in patients who experience seizure activity.13,14 Polysubstance abuse, co-ingredients and previously unidentified SCs may make management of SC intoxication difficult. Advances in chromatography methods have helped to isolate SCs in blood and urine, although these tests are not routinely available.

Conclusion
SC abuse is fairly common among teenagers and young adults. The use of these substances places the abuser and first responders at risk of physical harm. First responders and ED personnel should have a high index of suspicion for SC use if a person, especially an adolescent or young adult male, presents with altered behavior, tachycardia and a negative drug screen. Adverse effects associated with SCs are generally self-limiting and management is mainly supportive, although more toxic effects, such as seizures or myocardial infarction, have been reported from the use of these designer drugs.