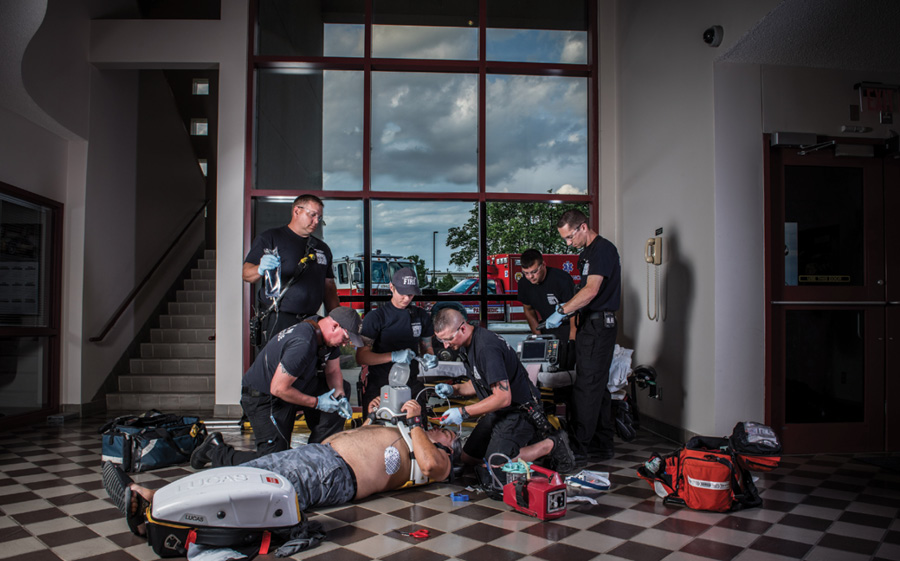 In 2013, Lincoln (Neb.) Fire & Rescue (LFR) partnered with community stakeholders to initiate a comprehensive effort to improve survival from sudden out-of-hospital cardiac arrest (OHCA) and improve upon each link in our chain of survival.

In order to impact survival on a community level, the rate-limiting steps in the chain of survival must each be addressed. Accurate measurement is critical in improving performance. Thus, the first step in our journey was for LFR to join the Cardiac Arrest Registry to Enhance Survival (CARES), which provides an accurate and transparent method to measure OHCA survival rates using the Utstein model.

Upon understanding LFR’s baseline performance, we explored proven treatment modalities to improve survival. Dispatchers were educated on prompt recognition of cardiac arrest as well as the timely initiation of dispatcher-directed chest compressions.

Time and effort were also spent on educating the public on the importance of bystander CPR. LFR invested in billboard advertisements to emphasize hands-only CPR, and our providers began educating people at mass gatherings. The bystander CPR app PulsePoint was also launched and has grown to over 13,000 followers locally.

In addition, LFR worked diligently on focused training and improvement in prehospital provider high-performance CPR. We now complete a comprehensive post-event analysis of every cardiac arrest utilizing the Code-Stat data review software from Physio-Control. It includes quality metrics such as chest compression fraction, the number of compression pauses greater than 10 seconds, the single longest compression pause and the ventilation rate during the cardiac arrest.

A post-event worksheet highlighting performance and suggestions for improvement is provided for each of the EMS providers who responded to the cardiac arrest. Upon recognizing that significant CPR pauses occurred while moving a patient in unresolved arrest to an ambulance, a protocol change was made directing providers to remain on scene while attempting resuscitation, rather than initiating immediate transport to a hospital.

In order to further enhance CPR quality and promote EMS provider safety if a cardiac arrest patient is transported, LFR initiated a field evaluation of the LUCAS mechanical CPR device. 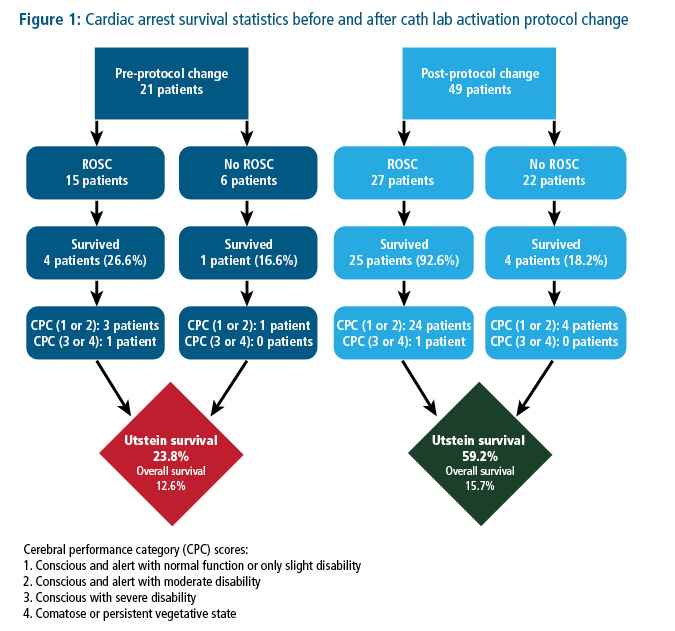 As we reviewed the hospital care these patients received, we noted intermittent initiation of therapeutic hypothermia along with inconsistent philosophies on which patients were candidates for catheterization lab intervention.

Reviewing the most compelling cardiac research, survival from shockable cardiac arrest is strongly correlated with cardiac catheterization laboratory intervention and the use of therapeutic hypothermia in the appropriate patient population.

We all agreed that witnessed v fib/v tach cardiac arrest is a survivable disease and that variability and inconsistency in care does lead to suboptimal outcomes. 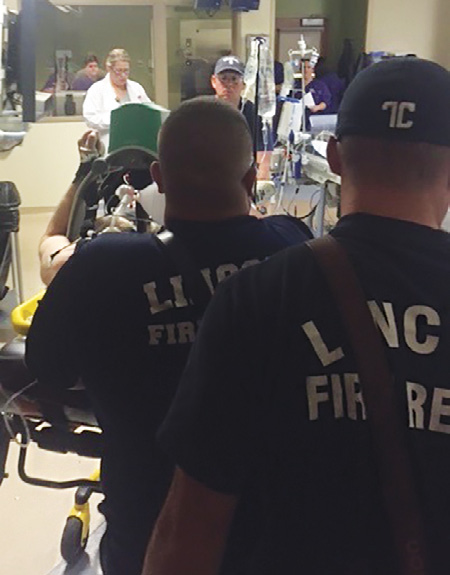 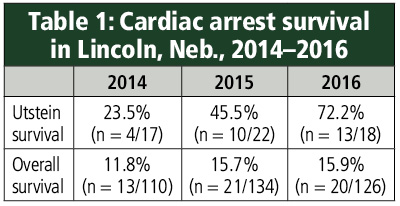 We discussed further survival prognostication criteria that would limit cardiac catheterization laboratory activation, such as restrictions on age, co-morbidity factors, presence or absence of bystander CPR, ROSC and signs of life with chest compressions.

In addition, the introduction of measuring high-performance CPR and the LUCAS mechanical CPR device led to field reports of cardiac arrest cases in which patients were breathing, blinking and moving.

After meeting with both cardiology groups, we agreed to move forward with a simple protocol of prehospital cardiac catheterization laboratory activation for any adult with witnessed, shockable cardiac arrest regardless of whether or not return of spontaneous circulation (ROSC) occurred. At the request of physician stakeholders, the interventional cardiologist involved in a case retain the ability to determine the most appropriate course of treatment upon arrival at the catheterization lab.

Split between the two cardiology groups, this would amount to about one prehospital cardiac catheterization laboratory activation per group per month for witnessed cardiac arrest cases.

LFR paramedics now activate the cardiac catheterization lab in the same manner as they activate it for a STEMI patient. The results have been dramatic. (See Figure 1, p. 24, and Table 1.)

During the 16 months before the protocol change was instituted, there were 21 patients who suffered a witnessed, shockable cardiac arrest. Of those 21 patients, 15 experienced sustained ROSC, defined as the restoration of a palpable pulse or a measurable blood pressure for at least 20 consecutive minutes or at the end of EMS care, prior to hospital arrival.

Of those patients with sustained ROSC, four of the 15 patients (26.6%) survived to discharge from the hospital while the remaining 11 died. Of the four survivors, three had a CPC score of 1 or 2.

Of the six patients who didn’t have a sustained ROSC, one survived to hospital discharge and five patients died. The one survivor had a CPC score of 1 or 2. 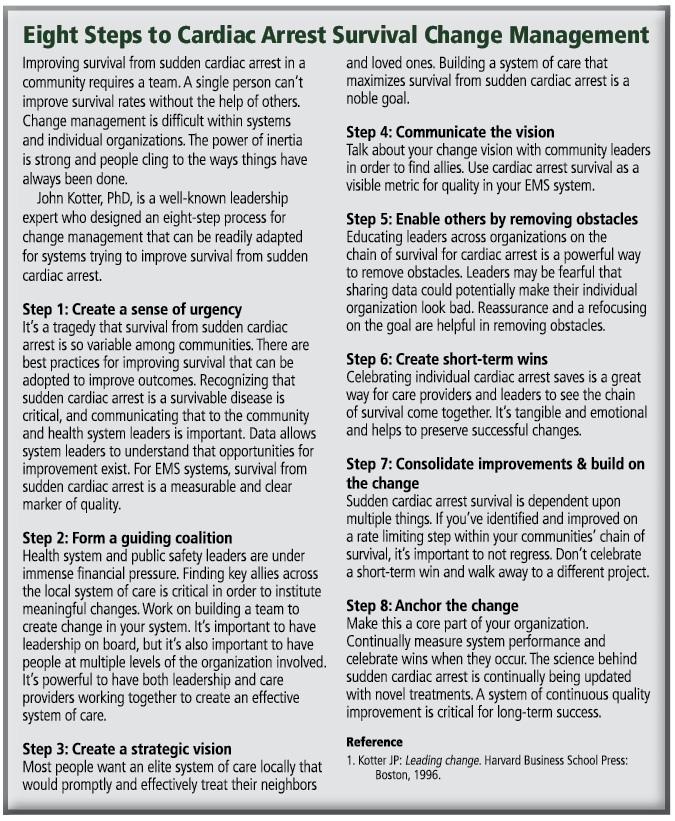 During the 29 months since the protocol change, there have been 49 cases in which a patient suffered a witnessed, shockable cardiac arrest. Of those 49 patients, 27 had a sustained ROSC prior to hospital arrival.

Of those patients with sustained ROSC, 25 of the 27 patients (92.6%) survived to hospital discharge while the remaining two died in the hospital.

Of the 25 patients who survived, 24 had a CPC score of 1 or 2. Of the 22 patients who did not experience sustained ROSC, four survived to discharge from the hospital while 18 died.

Of the four survivors, all 4 had a CPC score of 1 or 2. Chi-square testing shows the increase in survival rate for patients experiencing sustained ROSC prior to hospital arrival is statistically significant with p < 0.05.

Prompt cardiac catheterization laboratory intervention in sudden cardiac arrest patients provides numerous benefits. First, in our system, the pathway to therapeutic hypothermia became much more consistent since cooling catheters are almost exclusively placed in the catheterization lab upon conclusion of an intervention. 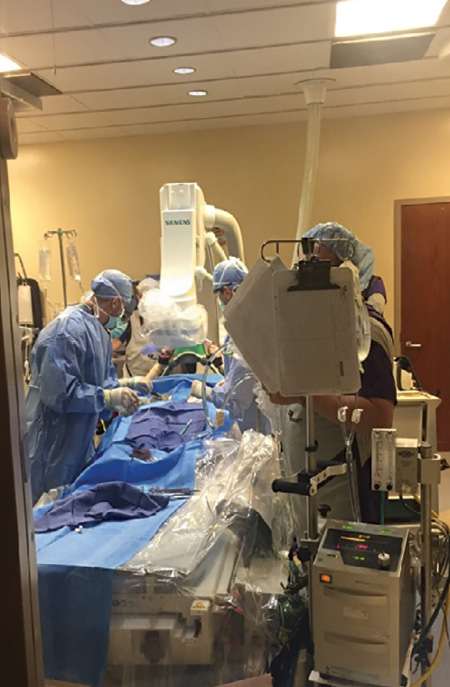 The cardiac catheterization lab at Nebraska Heart Hospital can now be activated by paramedics in the same manner as they activate it for a STEMI patient. Photo courtesy Jason Kruger.

Therefore, taking the arrest patient directly to the cardiac catheterization lab significantly decreases the time needed for a patient to reach targeted temperature.

Third, catheterization lab intervention allows for prompt placement of cardiovascular support devices such as a transvenous pacemaker, a cardiac assist device such as Impella, or extracorporeal membrane oxygenation (ECMO)-all of which may improve systemic blood flow and prevent re-arrest.

Survival from sudden cardiac arrest is highly variable among communities and is represented by the imagery of a chain of survival. If your community isn’t measuring cardiac arrest survival in a standardized way, measurement is the first step to making improvements.

We don’t have the luxury of trying to improve only one variable, then waiting several years to see if it made a difference. Improvements can be made throughout every link in the chain.

Standardizing hospital best practices in receiving sudden cardiac arrest patients presents an opportunity to improve survival at a system level. By identifying a group of patients who were most likely to survive witnessed, shockable cardiac arrest and then immediately activating the cardiac catheterization laboratory, LFR was able to improve survival rates without over-utilizing limited resources.