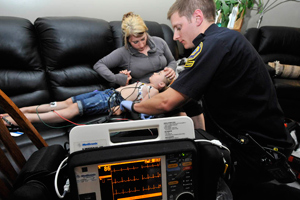 Key Terms
Cardiomyopathy: A general term designating primary noninflammatory disease of the heart muscle, often of obscure or unknown etiology and not the result of ischemic, hypertensive, congenital valvular or pericardial disease.
Hypertrophied: An organ that has increased in size due to an increase in the size of the cells rather than the number of cells.
Kawasaki disease: Also called mucocutaneous lymph node syndrome, this is an acute febrile illness, primarily of young children, characterized by inflamed mucous membranes of the mouth, “strawberry tongue,” cervical lymphadenopathy, polymorphous rash on the trunk, and edema, erythema, and desquamation of the skin on the extremities.
Marfan syndrome: One of the manifestations of abnormal fibrillin metabolism, characterized by cardiovascular abnormalities (commonly dilation of the ascending aorta).
Myocarditis: Inflammation of the muscular walls of the heart.
Wolff Parkinson White syndrome: The association of paroxysnak tachycardia (or atrial fibrillation) and preexcitation, in which the ECG displays a short PR interval and a wide QRS complex, which characteristically shows an early QRS vector (delta wave).

On Sept. 18, 2009, University of Tennessee basketball player Emanual Negedu had just finished practice when he decided to race another player to the end of the court. As Negedu won the race, his heart suddenly stopped beating. Once his teammates realized he was unconscious, a player sprinted to the training room to get emergency assistance. They called 9-1-1 and used an AED to shock his heart back into a normal rhythm. Fortunately, Negedu survived. He now lives with an implanted cardiac defibrillator.1

Sudden cardiac arrest (SCA) is an event that’s defined as non-traumatic, non-violent, unexpected and resulting from sudden cardiac cessation within six hours of previously witnessed normal health.2 In approximately one-third of all cases, death is instantaneous, presenting without symptoms or with symptoms that occur for only a few seconds.

Each year, an estimated 325,000 people die in the U.S. from SCA. Of that number, the Heart Rhythm Society estimates that approximately 7,000 are young adults, children and infants. Approximately 10% of SCA events occur among people who are less than 40 years of age. The overall incidence of sudden cardiac death (SCD) in youths is unknown because of the lack of a mandatory and systematic national registry.3 Many who die from SCA have no prior history of heart disease and are stricken without any warning. The average rate of survival of SCD is 6—7%.4

This article will discuss some of the conditions that predispose young patients to SCD–hearts that, in most cases, are too young to die.

Hypertrophic Cardiomyopathy
Hypertrophic cadiomyopathy (HCM) is a disease in which a portion of the myocardium is hypertrophied without obvious cause. Younger people are more likely to have a severe form of HCM, which is frequently asymptomatic until SCA occurs. HCM is often passed on hereditarily.5 In general, HCM has a bimodal peak of occurrence. The most common presentation is in the third decade of life but may present in individuals of any age–from newborns to elderly adults. In children, inherited cases are found in an age range from newborn (i.e., stillborn babies) to adult.

It’s generally considered the second most common cause of SCD in pediatric patients and young adults. Typical arrhythmia symptoms are a rapid heartbeat associated with light-headedness or syncope.

DCM
In dilated cardiomyopathy (DCM), the heart’s ability to pump blood is decreased because its main pumping chamber–the left ventricle–is enlarged, dilated and weak. Most cases are idiopathic, although it’s common to find other family members affected. Cardiomyopathy continues to be the leading reason for heart transplants in children. Currently, no published reports specify the total number of children affected, but the National Pediatric Cardiomyopathy Registry states one in every 100,000 children in the U.S. is diagnosed with primary cardiomyopathy.8

Ventricular tachycardia/fibrillation is the usual cause of death in cardiomyopathy.9 Infants generally present with tachypnea, diaphoresis, feeding intolerance and growth failure. Symptoms in older children include orthopnea, exercise intolerance, chest pain and often flu-like symptoms in the case of acute myocarditis; abdominal pain may be the result of hepatic congestion or reduced cardiac output.10

RCM
Restrictive cardiomyopathy (RCM) is a disease of the myocardium characterized by impaired relaxation and diastolic dysfunction of either or both ventricles.11 In approximately 10% of cases, fainting is the first symptom to cause concern. Unfortunately, sudden death has also been an initial presentation of symptoms in some patients.

Myocarditis
Myocarditis is characterized by inflammation of the heart. The disease affects the muscle cells of the heart–called myocytes–and the specialized electrical conduction pathways within the heart. Children with acute myocarditis frequently display signs and symptoms of a viral infection early on, including fever, muscle aches and malaise. More severe symptoms suggesting the onset of cardiac involvement, such as frequent shortness of breath and exercise intolerance, may occur days later. Although many children recover from mild myocarditis with no consequences, severe myocarditis is responsible for significant morbidity and mortality in children worldwide.

ICS
Ion channelopathies (ICs) affect the electrical functioning of the heart without affecting the heart’s structure. This means they can be detected only during life–not post-mortem. ICs are probably responsible for four of every 10 cases of sudden arrhythmia death syndrome.12 Malignant arrhythmias, such as ventricular tachycardia, may lead to SCD and are easily recognized on a 12-lead ECG.

WPW
Wolff (Wolfe) Parkinson White syndrome (WPW) is a disorder that can lead to episodes of a very rapid heartbeat. Although WPW is present at birth, the arrhythmias it causes usually become apparent during the teens or early 20s.13

An individual whose accessory pathway has a short refractory period (less than 200 milliseconds) is at risk of experiencing rapid heart rates and sudden death. Many young people with WPW are asymptomatic until a tragic event occurs.

Marfan Syndrome
The main cause of premature death in those with Marfan syndrome is dissection of the ascending aorta, which results in tamponade, left ventricular failure caused by aortic regurgitation and myocardial ischemia from disruption of the coronary orifices–or stroke if the arch vessels are involved.8

Coronary Artery Abnormalities
Coronary artery aneurysms caused by Kawasaki disease are somewhat rare in children. They cause significant morbidity among children when they occur and can result in a range of cardiac and non-cardiac complications.14 Vasculitis results in aneurysms and a thickening of these arteries.

Conclusion
Early detection and early intervention are necessary to save the life of a child or young adult who presents with SCD. Many times, these deaths occur without warning. However, EMS providers can watch for some symptoms. Responding EMS providers should document when syncope has occurred and conduct a thorough physical examination, including a 12-lead ECG. Most causes of SCD in young adults will show some form of recognizable pattern change on the 12-lead. A familial history of cardiac problems and SCA before age 50 is a major warning sign. Palpitations, chest pain or syncope, especially with exertion, are also concerning symptoms.

Unfortunately, survival rates in children and adolescents after SCA are poor. It’s critical that EMS providers screen patients for these warning signs and are aware that symptoms can be subtle so these patients don’t get missed in their early stages of onset. JEMS