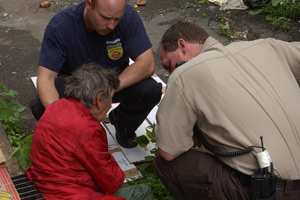 You respond to assist police with a patient acting strange. Arriving on scene, you find a young male in police custody. He’s sitting handcuffed and appears to be sleeping. The officer tells you they responded to a disturbance and found an adult male sitting on the ground. Bystanders report that the patient was yelling incoherently and appeared to be attempting to remove his clothes. The officer tells you the young man is acting strange but is not combative.

When you call the patient’s name, he opens his eyes and looks at you. He answers your questions slowly and says he has no idea what he was doing. He denies taking any illicit drugs, and the only prescription medication he takes is topiramate. He tells you he has a history of seizures and that he just wants to sleep.

En route to the hospital, you establish an IV line and check the patient’s blood glucose level, which is 96 mg/dl. A physical exam reveals no signs of traumatic injury, and vital signs are within normal limits–with the heart rate slightly elevated at 96 beats per minute. A bit confused about the relationship between the description of events and a history of seizure, you transport the patient to the emergency department for evaluation. After giving a hand-off report to the receiving physician, you ask her about seizures that present differently than the grand-mal and petit-mal seizures that you learned about in EMT school.

Categorizing Seizures
Seizures can be divided into two broad categories: generalized and partial. Generalized seizures involve both sides of the brain, which include grand-mal (tonic-clonic) and petit-mal (absence) seizures. Tonic-clonic seizures are more dramatic in their presentation and may last several minutes. Patients with tonic-clonic seizures may make a loud noise when the seizure begins. Their muscles will tighten and relax repetitively during the seizure.

After the seizure has ended, the patient will seem confused while their brain re-organizes. This is known as the post-ictal state, and during this time patients may be lethargic, anxious, and in some cases, combative. If the patient returns to seizure activity before gaining consciousness, or if the seizure activity continues, this is a serious condition known as status epilepticus.

Another type of seizures are known as absence seizures, which are most commonly seen in children. These seizures are subtle and last for a few seconds. Children may stare into space with no muscle movement, and in some cases, will blink their eyes rapidly or move their mouths in a tasting motion. After the seizure, the child may be confused because they feel like they’ve lost a segment of time.

Other generalized seizures are Myclonic and Atonic seizures. Myclonic seizures present with no alteration in consciousness, but the patient will experience a rapid uncontrollable spasm of a muscle, typically bilaterally. For example, a patient with myoclonic seizures may suddenly throw both hands into the air. These seizures are more common in adults but people of all ages can experience them. Onset during puberty is also common.

Atonic seizures, also known as drop seizures, present with a sudden lack of muscle tone. Patients experiencing Atonic seizures will suddenly lose all muscle tone and fall to the ground. This may appear similar to a marionette having its strings cut. These seizures are short in duration– commonly less than 20 seconds. Patients often wear helmets to prevent injury during a fall caused by this type of seizure.

Partial seizures involve only a part of the brain and are divided into two categories: simple partial and complex partial. Both of these seizure types will vary in presentation based on the area of the brain affected. Simple partial seizures may present with a feeling, like happiness, a sensation, such as tingling skin, or a taste or sound. Consciousness isn’t commonly lost. Complex partial seizures present with automatisms, which are unconscious movements that may be simple and repetitive movements, such as smacking lips or pulling at clothes, or they may be a more complex series of movements. Patients with this type of seizure may also scream, cry or become combative. After the seizure, which commonly lasts only a few minutes, the patient will be tired and won’t be able to recall what they did during the seizure. Based on these factors, this is most likely the type of seizure the patient in this particular case experienced.

Conclusion
When you evaluate a patient who has experienced a seizure or possible seizure, you should remember that many different causes exist, including tumors, traumatic head injuries, strokes, infections and exposure to chemicals such as amphetamines or carbon monoxide. In many cases, the exact cause of a patient’s seizure is unknown, or idiopathic. Reversible causes may be remedied, as in the case of an infection where the patient can be treated with antibiotics. Other, non-reversible causes may be treated with anticonvulsant drugs; however, these drugs don’t cure seizures or epilepsy, but rather, work to control them.
It’s important to treat seizures symptomatically by maintaining airways and protecting patients from injuries that may occur during seizure activity. Remember to consider potential causes, such as hypoglycemia or hypoxia, and obtain a thorough patient history that includes medications, and a good description of the seizure activity from bystanders. Never assume it is “˜just a seizure.’