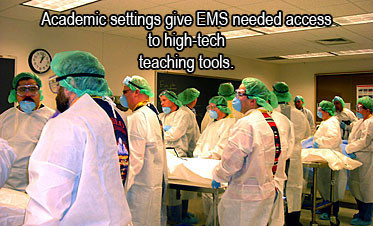 Considerable discussion has taken place on the various EMS internet lists about a major policy change by the National Registry of Emergency Medical Technicians (NREMT). The NREMT Board of Directors will begin to require that — as of Dec. 31, 2012 — only graduates of accredited EMS educational programs will be eligible to write their examinations. This means that in less than five years, graduates of these programs will be the only ones who can be registered. Like any controversial EMS issue, an immediate outcry of indignation came from the unwashed masses. There were calls for the various states to break from the National Registry and calls for litigation to stop the process. Now that the emotional response is over, let’s take an objective look at this.

A constant mantra in EMS states EMS personnel are underpaid and don’t have an equal seat with other allied health professions in the house of medicine. I can’t agree more. The question remains: How do we correct these wrongs? The only logical answer is increased education. Increased education will make EMS more comparable with the other more traditional allied health disciplines. Following that, EMS will have an equal seat in the house of medicine.

Numerous changes and improvements have been made in EMS over the past 30 years. These, for the most part, were driven by EMS education. However, EMS education in the U.S. remains extremely fragmented. Some programs strive for the lowest possible standards while others aim for the highest. Unfortunately, some aim low and miss. Although we don’t have standardized national educational curricula, we do have education standards. Thus, the purpose of accreditation is to assure that all programs at least reach a certain minimal level.

It’s becoming clear as EMS education evolves that it needs to be in an academic setting or in a setting with ready access to some of the facilities and equipment primarily found in colleges and universities. EMS students need to access the knowledge and expertise of areas outside of EMS. They need access to anatomy labs and their supplies, which include human cadavers, physiology labs, high-fidelity patient simulators and library facilities. Such equipment and facilities are costly and only found in academic centers. Access to these facilities is especially important given that EMS students tend to be visual learners and non-traditional in nature.

Is accreditation the right answer to some of the EMS industry’s problems? History would seem to indicate it is. EMS continuing education already requires that programs be accredited by the Continuing Education Coordinating Board for Emergency Medical Services (CECBEMS). Currently, 14 states currently require initial EMS educational programs be accredited by the Committee on Accreditation of Educational Programs for the EMS Professions (CoAEMSP) — the national EMS accrediting body for initial education. From what I can tell, these states have done quite well in this regard. Today, there are numerous EMS programs — maybe too many. Students, by their nature, will often seek the easiest and fastest program. While this may seem to meet the needs of the student, it doesn’t benefit the profession or the patient.

There must be some assurance that all EMS programs meet the same minimal level of educational competence. A similar issue occurred in the latter half of the 19th century in regard to medical schools. During that time, a significant proliferation in medical schools existed in the U.S. and Canada. Most medical schools of the era were proprietary. A degree was awarded after two years, and laboratory work was virtually nonexistent. The schools began to compete for students, and the overall quality of medical education fell. The education became shorter and shorter, and the quality of the entering student declined. Furthermore, numerous schools that espoused pseudoscientific practices, such as homeopathy, magnetic healing and similar nonsense, arose.

In 1908, the American Medical Association (AMA), which represented mainstream medicine, asked the Carnegie Foundation to study the status of medical education in the U.S. and Canada. A major supporter of medical education reform, The Carnegie Foundation chose Abraham Flexner to oversee the study. Flexner was a well-respected educator with degrees from The Johns Hopkins and Harvard universities. He surveyed the 155 medical schools in existence at the time. The results of the study, termed the Flexner Report, were published in 1910 and made the following recommendations:

As a result, the majority U.S. medical schools offering the MD and DO degrees closed. No Canadian schools closed, because their educational standards were found to be adequate (and more based upon the European model). American schools based upon pseudoscientific practices (homeopathy, osteopathy and naturopathy) eventually closed or changed. For example, Hahnemann Medical College in Philadelphia, a homeopathic school, became a mainstream MD school. A few of the osteopathic schools embraced mainstream medicine, and osteopathic medicine survived Flexner — although the AMA didn’t recognize it as equal to MD education until 1968. Although the Flexner report was controversial, it resulted in significant improvements in medical education in the U.S. and put American physicians on par with European practitioners.

I believe EMS will benefit from tightening up of paramedicine educational programs, much like what happened in medicine after Flexner. Some programs will have to close. Some will have to merge. That will indeed be painful. But, the net result will be a better EMS educational system, better-educated EMS personnel and better patient care. In the overall scheme of things, is that not what it’s all about?