More
Home Patient Care A New Tool in the Box 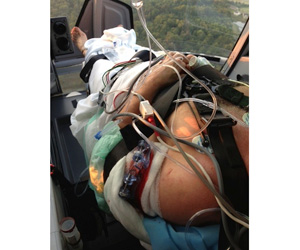 In classrooms all across the nation, students are taught that hypoxia is inadequate oxygen supply for the body. Although that’s true, we sometimes fail to explain to students the multiple types of hypoxia that our patients could be encountering. In fact, in most commonly utilized textbooks for EMT and paramedic programs, the four types of hypoxia are not addressed.

Understanding the etiology of the four types of hypoxia–hypoxic, hypemic, stagnant and histotoxic–is crucial in providing care that will result in the most desirable outcome for the patient.

Patients experiencing significant hemorrhage are an excellent example. Despite a provider’s best effort to gain an airway and provide high-flow oxygen, these patients will experience hypemic hypoxia due to a lack of hemoglobin, which serves as the transport mechanism for oxygen molecules to reach the body’s tissues. As a result, the human body experiences anaerobic metabolism, resulting in the production of lactic acid and leading to the onset of shock. Controlling the patient’s bleeding, then, becomes the priority in preventing hypoxia in hemorrhage patients.

Military and tactical providers have long recognized the importance of early and aggressive hemorrhage control and treatment to prevent their patients from going into shock. They are well aware that once a patient goes into shock, it is difficult to reverse their downward spiral.

Therefore, unlike their civilian counterparts, military and tactical providers are trained to address massive hemorrhage control prior to airway and breathing. The frequency of mass-hemorrhage injuries is more common for our active-duty military providers; however, the physiology is no different than the injuries that civilian prehospital providers encounter.

What about Tourniquets?
Tourniquet application is fast, efficient and controls bleeding by applying circumferential pressure to an extremity. The pressure exerted compresses vessels in the extremity, resulting in blood flow being stopped to the tissues distal of the application site.

However, the tourniquet works because it stops blood flow. As a result, the tissues distal of the applied site experience stagnant hypoxia, which results when blood is no longer being circulated adequately or starts to pool in a certain area. Stagnant hypoxia can be a result of cardiac failure or a blockage in the circulatory system.

Following tourniquet removal, hospital personnel often have to treat the patient due to an overall change in their systemic circulatory system following the release of stagnant blood with increased levels of lactic acid, potassium and other chemical imbalances.

Ironically, tourniquets can also play a positive role as an adjunct in the prehospital setting to prevent complications from stagnant hypoxia in victims with crush injuries. As the object crushing the limb is removed, the tourniquet can be used to prevent the stagnant blood from being returned to central circulation.

A Better Way?
Although tourniquets are certainly useful, life-saving tools to control blood loss, the optimal tool is one that effectively controls the hemorrhage but also allows for distal blood flow to the uninjured parts of the extremity. Clinicians should perform a rapid assessment of each injury to determine the most effective method to control bleeding. The assessment should include the type of wound, length, approximate depth and type of vessels involved. The provider should also determine whether the edges of the wound can be approximated and if the wound was sustained in a compression-able area.

Wound closure has been the hemorrhage control practice for many years in the hospital setting for wounds that have edges that can be approximated. In the prehospital setting, however, field suturing has never been a common practice. In the past, the timeframe in which it would take to close most wounds appropriately wasn’t conducive to the prehospital environment and the sometimes tedious process of closing wounds has been considered an unacceptable risk of needle stick injury for providers, particularly those working in moving ambulances.

But with the introduction of the iTClamp50, EMS providers can now perform a field wound closure technique that works very similar to suturing in the field but in a faster and safer manner. The iTClamp50 incorporates small needles (four on each side) on a clamp device that allows clinicians to quickly provide temporary closure of a wound by approximating wound edges and creating a “watertight” seal. The bleeding then creates a hematoma under pressure beneath the skin as it fills the wound cavity with blood and creates a clot to control blood loss. (For more on how the iTClamp works, see this article.)

The iTClamp50, designed to be used in areas that are compression-able, is an ideal device for the control of arterial, venous or capillary bleeding in wounds to the extremities, axilla and inguinal areas.

When used appropriately, the iTClamp50 offers a benefit over tourniquets because it allows distal blood flow to the intact vessels of the injured extremity, which in turn greatly reduces or eliminates the possibility for stagnant hypoxia.

The iTClamp in Use
Hospital Wing, a non-profit air medical transport based in Memphis, Tenn., that provides inter-hospital transfers as well as emergency scene calls, was the first program in the United States to adopt the iTClamp50 as part of its hemorrhage-control protocol.

Prior to the device receiving FDA clearance, Hospital Wing had the opportunity to work with staff from Innovative Trauma Care in testing the application of the device at the Medical Education Research Institute (MERI) in Memphis. Following FDA clearance, Hospital Wing acquired the devices and provided in-service training for the flight crewmembers, who provided positive comments on the easy operation of the device. Following in-service training, the devices were placed on the aircraft for patient use.

Hours after placing the devices in service, Hospital Wing received a flight request from an outlying hospital to transport a patient who had been injured in a chainsaw accident. When Hospital Wing flight crewmembers arrived, they found a 64-year-old male with serious bleeding to his left upper arm. The crew removed the blood-soaked dressings that were applied by hospital staff in efforts to assess the wound. Upon assessment it was noted the patient had an approximate 7-inch-long, 1-inch-deep wound that was bleeding profusely.

Flight Paramedic Jennifer Miller and Flight Nurse Jan Weatherred made the decision to deploy the iTClamp50. Due to the size of the laceration, two iTClamps were utilized. Within two minutes following their application, the bleeding was under control (see photo, p. 16). The patient was then flown to the regional Level 1 Trauma Center and, approximately 35 minutes after application, the iTClamps were removed with the trauma team at the patient’s bedside.

Following removal of the iTClamps, the bleeding was confirmed to have subsided and the patient was hemodynamically stable and able to be treated in the critical care assessment portion of the trauma center instead of requiring a shock trauma room. Physicians were able to suture the wound (see photo, above right)and provide antibiotic therapy. The patient was discharged approximately eight hours following arrival at the trauma center.

Quick and effective control of the patient’s severe hemorrhage allowed the Hospital Wing flight crew to preserve precious red blood cells and resulted in the patient not requiring a blood transfusion or experiencing a hypoxic event.

Conclusion
As more equipment and pharmaceutical agents become readily available to prehospital professionals, we must first remember to sharpen our critical thinking and patient-assessment skills, understand the four types of hypoxia situations and how to treat them and save as many red blood cells as possible.

With multiple tools to control hemorrhage, it is also important to understand and utilize the most appropriate method or methods to control bleeding, such as packing a wound with a hemostatic dressing prior to applying the iTClamp if the wound is large and open.

Tourniquets have been adopted as the standard of care for mass hemorrhage control due to evidence-based medicine obtained from our military healthcare providers. Now, we have a tool that may be even more effective than tourniquets for certain situations.

As civilian EMS professionals, we should follow the footsteps of our military and tactical providers and educate our clinicians to rapidly identify and effectively treat uncontrolled, life-threatening bleeding prior to becoming deeply engaged in providing airway and breathing care. Without red blood cells to transport oxygen molecules to the tissues, all is lost.