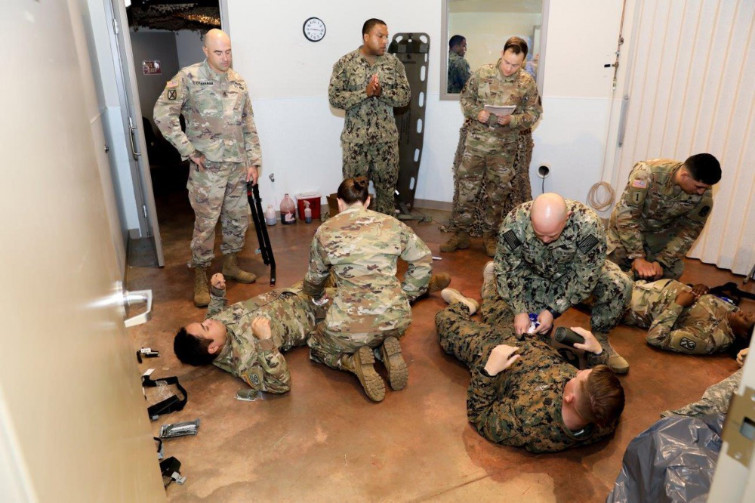 FORT BENNING, Ga. — A new, standardized way of training combat troops of all services in how to give first aid to wounded service members has undergone intensive vetting here by experts, and a final draft will be delivered to the Department of Defense at the end of this month, officials said Dec. 9.

Upon adoption by the Pentagon, the curriculum, known as Tier 2 Tactical Combat Casualty Care, would become the one official set of methods taught to certain service members in non-medical jobs, especially those close to combat, who might well be the only ones available to keep the wounded alive until they can get to a hospital, officials here said. Which service members will be given Tier 2 training will be at the discretion of the individual services.

Tier 2 is just one of four parts of what the military calls Tactical Combat Casualty Care, or TC3.

TC3 has been drawn up in response to a Pentagon directive that a new tactical combat casualty care curriculum be developed for all the armed forces. It consists of four levels of skill, all geared to training service members in the best methods for giving medical care to the wounded in the first critical minutes before they can be taken to a hospital.

Tier 2 will replace what is currently known as Combat Lifesaver (CLS) training, and draws on the most medically up-to-date lessons learned during the nearly two decades of post-9/11 combat in places like Iraq and Afghanistan, said Army Lt. Col. Ethan Miles, chairman of the Tier 2/Combat Lifesaver Working Group. He is also the surgeon for Fort Benning’s Maneuver Center of Excellence.

“One of the many things that the Global War on Terrorism has taught us is that one of the most important things you can do in saving lives is training non-medical people,” Miles, 44, of Aptos, California, said of Tier 2 TCCC. “The person next to you is the one who’s gonna save your life, or it might be you saving your own life.”

Miles is an Army medical professional with years of battlefield experience, largely with the U.S. Army Rangers.

Indeed, it was the 75th Ranger Regiment that even before 9/11 was training all Rangers to a certain basic level of TCCC so that if one were wounded another would know what to do to try to keep him alive, Miles said.

“Before the War on Terrorism started,” said Miles, “they were doing tactical combat casualty care training and they were doing it for every single member of the 75th Ranger Regiment. So if you deployed you knew how to do basic TC3 skills.

“And of course since they’ve been continuously engaged in combat they’ve got a massive data base of injured Rangers,” he said. “And what we’ve really learned from that database is that it’s the person next to you that’s gonna save your life. We saw a huge amount of these skills being put to use by non-medical personnel.”

That practice kept to zero the number of wounded Rangers who died from preventable causes before reaching a hospital, Miles said.

Of the other three TC3 skill levels, Tier 1 is elemental first aid to be taught to all non-medical service members regardless of military job. Tier 3-Combat Medic/Hospital Corpsman is for certified medics. And Tier 4 Combat Paramedic/Provider is for special operations medics, physicians and physician assistants.

For the vetting of the Tier 2 curriculum Fort Benning was chosen in large part because of its status as home of the MCoE, which trains and is the intellectual center for the Army’s maneuver force — the Infantry and Armor branches.

To ensure the Tier 2 curriculum — including its training videos, teaching slides and other materials — will be workable for trainers and those they’ll be training, some 40 experts from across the services, including medics, drill sergeants, combat arms Soldiers, civilian curriculum developers and others, spent five days at Fort Benning doing a line-by-line vetting of the Tier 2 TCCC curriculum. They began work Dec. 2.

While the group included certified military medics it also included non-medics like drill sergeants and others who teach service members how to tend the wounded on the battlefield, in the crucial, first-responder stage before they get to a hospital.

“We wanted to get some non-medical folks in the room, to get the trainers in the room, and get feedback,” said Army Master Sgt. Mike Remley, senior enlisted adviser to the Joint Trauma System at Joint Base San Antonio, Texas, said in an interview last week.

The group was brought together at Fort Benning to assess the curriculum in its many details, said Remley, 36, of Jacksonville, Florida.

“Do the videos and the skill cards and the slides get you where we want you to be? Is there confusion? Is it intuitive?” Remley said. “Is it easy to access? And it’s making sure that we’re all on the right track. So we have folks from the Navy, the Marine Corps, the Air Force and the Army here now.”

Once adopted, Tier 2 training will last one week and will teach service members a variety of skills that can prevent the most common causes of battlefield death — those involving bleeding and breathing, Miles said. Those skills include applying tourniquets and various types of bandages, and restoring breathing when a wounded service member’s airway is blocked.

The team huddled daily at Fort Benning’s Medical Simulation Training Center on Bass Road to discuss the curriculum and test the teachability of the techniques by performing them on fellow-team members and on mannequins used to simulate wounded troops.

One of the experts representing the Marine Corps during the vetting was Navy Petty Officer 1st Class Anthony Ley, 28, of Murietta, California. He’s a Navy hospital corpsman with the Marine Corps’ Field Medical Training Battalion-East, at Camp Lejeune, North Carolina. He’s given medical care to wounded service members in Afghanistan.

“We’re going through the Tier 2 CLS curriculum, going through it by the numbers,” said Ley. “And then putting it under our magnifying glass or our microscope and filtering and making sure that it makes sense to our branches.

Ley said the NCOs feel “a responsibility to” junior members of the Army, Navy, Air Force and Marine Corps “to make sure that this curriculum is easy to digest.

Making sure that their non-medical eyes and ears can understand it at first glance. And obviously, as subject matter experts, we have a responsibility to make sure that it’s medically viable, that it makes sense,” Ley said.

Another of the Tier 2 team’s NCOs, Army Staff Sgt. Felicia Simpson, said she was encouraged by seeing that the curriculum contains techniques that would become part of the new guidelines for Tier 2 TCCC training.

Simpson, 32, of Green Cove Springs, Florida, is an Army medic stationed at Fort Benning with Headquarters and Headquarters Company, 198th Infantry Brigade, which trains Soldiers to serve in the Infantry. She’s a former drill sergeant who’s currently a senior instructor with the brigade’s First Aid Committee.

Simpson has also served as a combat medic in Afghanistan, and at times gave wounded troops in-flight blood transfusions in the medical helicopters that swept them off the battlefield and rushed them to medical stations for further treatment.

“Seeing those changes that they’re going to make — had those changes been made when I deployed, it would have been more beneficial,” said Simpson. “I could have gotten blood administered faster if certain interventions were done. So the changes that I’m seeing here, it’ll be a positive change across the board.”

0
This presentation will simplify and demystify many advanced ECG interpretation skills.