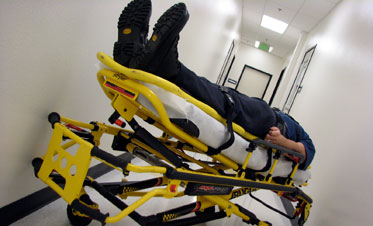 The Science and The Street
Following in the footsteps of esteemed Dr. Bryan Bledsoe, the authors of this study undertook the task of exploring the science, or lack thereof, that supports the common practice of placing hypotensive patients in the Trendelenburg position.

The authors of this study replicated what another study did in 2005. They did this by searching the literature for published research on the value of the Trendelenburg position. They found 30 articles, of which only nine were peer reviewed. The common theme in all the studies was that, in both normotensive and hypotensive patients, the Trendelenburg increased venous pressures but didn’t result in significant improvement in systolic blood pressure. Patients with cardiogenic shock experienced worsening pulmonary edema.

Some have suggested using a modified Trendelenburg position where the patient is kept flat and the legs are raised above the heart. It has been suggested that this “auto-transfuses” the patient with blood. However, the research doesn’t support this. The volume of blood that drains from the lower extremities in the hypovolemic patient is minimal and does not result in any significant rise in blood pressure.

Considering that aspiration is a greater risk with the patient in the Trendelenburg position and the lack of research supporting its use, perhaps it’s time to consider other options. One exciting prospect is an impedance threshold device for spontaneously breathing patients made by the creators of the Res-Q-Pod. Perhaps we can begin to treat our patients based more on science than on 150-year-old ritualized procedures.