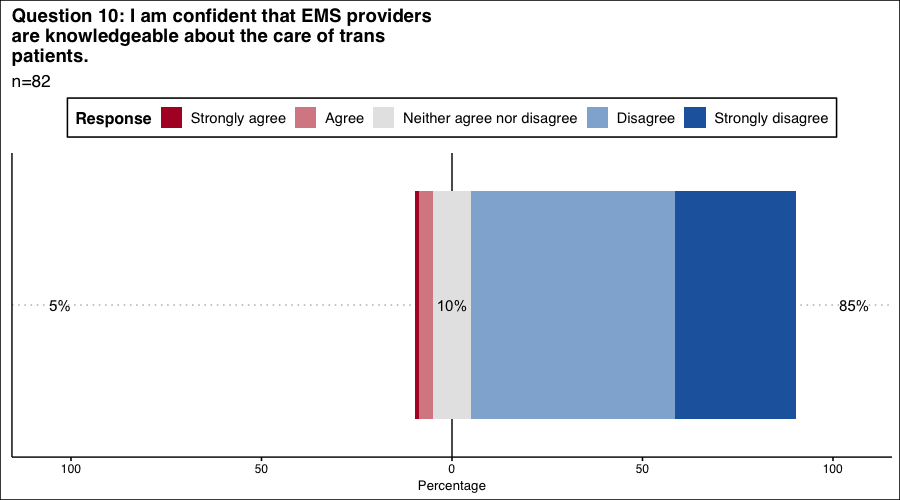 With data from thousands of survey responses from EMS providers and transgender people, team now shifts project focus from research towards education

On August 7, 1995, Tyra Hunter, a 24-year-old African American hairdresser, was involved in a car accident in Washington, D.C. She was severely injured in the crash and died hours after being transported by the D.C. Fire Department to D.C. General Hospital. In December 1998, three-and-a-half-years later, the jury in a wrongful death lawsuit awarded Tyra’s mother nearly three million dollars after finding that EMS providers insulted her and withheld care from her, and the emergency department physician failed to diagnose her injuries and treat her consistently with nationally accepted standards of care.1

Witnesses on scene of the incident reported that after firefighters cut off Tyra’s pants, they recoiled, made crass remarks, and stopped treatment for several minutes. Records showed that when she arrived at the hospital, she was refused a blood transfusion although one was indicated, and multiple units were available. Tyra died because she was transgender.

A quarter-century later, transgender people are afforded more civil rights, legal protections and opportunities for advancement than they were in 1995. But are things much better for them today when it comes to receiving EMS care?

A discussion with their medical director launched them into a large research project that involved surveys with thousands of responses and resulted in abstract poster presentations at the National Association of EMS Physicians Annual Meeting in San Diego in January 2020.

At M Health Fairview EMS, formerly HealthEast Medical Transportation, in Saint Paul, Minnesota, EMT Eli Bevis and Paramedic MJ Zappa worked with Medical Director A. Keith Wesley to determine if there was a lack of understanding about transgender patients that would lead EMS providers to deliver substandard care.

A coworker with expertise in data and statistics, Paramedic Marshall Washick, assisted with interpretation and analysis. Their research showed there is a significant discordance between how transgender patients perceive the care they receive from EMS, and how EMS providers themselves perceive the care they give to their transgender patients. It also demonstrated that many EMS providers, at least in their home state of Minnesota, were resistant to receiving education on the topic.

Two surveys were conducted. The first, the “social media” survey, which received 2,782 responses, was distributed across Facebook and other media platforms and by word of mouth. It reached respondents from six continents, at least eighteen countries, and every region of the United States who identified themselves as either/both an EMS provider and/or a transgender person; it was also promoted by JEMS.

Invitations to participate in the second survey, the “Minnesota” survey, were distributed directly to the email addresses of each of the 28,590 EMS providers certified by the Minnesota EMS Regulatory Board, and received 4,127 responses.

The social media survey was analyzed by filtering responses to only include data from respondents in the United States, and then compared answers to corresponding questions asked of the two groups: EMS providers and transgender people.

EMS provider respondents were asked if they felt confident clinically treating a transgender patient. transgender respondents were asked if they were confident that EMS providers were knowledgeable about the care of transgender patients. These questions both accepted responses on a five-point Likert scale with responses ranging from strongly agree to strongly disagree. The below figures are a graphical representation of responses to these questions, and an almost perfect juxtaposition is obvious. 85% of EMS providers felt confident caring clinically for these patients, but 84% of the potential patient population did not feel confident in the ability of EMS providers to deliver knowledgeable care.

This discordance was noted by researchers to intensify when respondents had experience with the other group; transgender patients who had been treated by EMS before were even less likely to have confidence in the providers, while EMS providers who had treated a transgender patient before experienced a boost in confidence in their ability to do so again.

Therefore, analysis of the results of this survey focused on the thoughts and feelings of EMS providers as a broad demographic, although researchers did obtain data regarding respondents’ level of certification, the type of service for which they work, and their age, years of experience and gender identity. Given 4,127 responses to 28,590 survey invitations distributed, researchers were excited to obtain data representing the thoughts and feelings of 14.4% of currently certified Minnesota EMS providers.

EMS providers were asked if they would seek out education on this topic if it were available, and given a choice of four responses: “yes, voluntarily or without other reward;” “yes, if paid for my time or given continuing education credit;” “no, not unless mandatory;” and “no, not even if it was mandatory, I would refuse to participate.”

Over 40% of respondents answered no, and 6.3% of total respondents indicated they would refuse to participate in education on the topic of care of transgender patients even if it was mandatory.

Of the 41.3% of respondents who answered no, 50% indicated they understood the appropriate terminology to use to refer to transgender people and their gender identities or about the way people transition genders.

These findings were surprising to researchers. They suggest that education on this topic will be difficult, as an audience may be quite polarized. The reason for this polarization was considered to be beyond the intended scope of the research, but merits further investigation.

The correlation between EMS providers already being confident about their ability to care for transgender patients and being open to education on this topic is mirrored by a correlation between EMS providers lacking confidence in their ability to care for these patients and not wanting to participate in education developed specifically to boost that confidence.

The lack of information on best practices for caring for these patients may be due to an underappreciation of the general prevalence of transgender people in the wider population. In the Minnesota survey, providers were asked if they could recall a particular instance when they were responsible for the care of a transgender patient, and they were given three response options: “yes, I can recall at least one encounter with a patient I’ve treated during my career who I’m certain was trans;” “maybe, I am not certain if I’ve had a trans patient or not, or I cannot recall a specific encounter with one;” and “no, I don’t believe I’ve ever treated a trans patient at any point during my career.”

This question was intended by researchers to send respondents to different pages of the survey online, with respondents who answered yes being prompted to answer additional questions about their experience caring for a transgender patient. However, analysis of the responses to this question itself interested researchers after data was collected. Another 45.8% of respondents chose the third option, and researchers admit that some of these respondents may, indeed, never have treated a transgender patient before. However, with recent data from various sources showing that between 0.6% and 3% of the U.S. population identifies as transgender, researchers suggest that many of these respondents may have neglected to consider that one or many of their patients could have been transgender, but that they failed to identify them as such because they did not stand out or come out during their interaction.

Researchers asked respondents who treated a trans patient how they were able to identify the patient as transgender and provided response options, including the patient came out or the EMS provider was told by someone else.

A significant number of write-in responses were also received to this question, including one, representative of the attitude of many, which just read “obvious.” While EMS providers may feel confident in their ability to identify transgender people on sight, they may neglect to consider that many transgender people are not “obvious.”

In addition, they neglect to consider that assuming their patients are not transgender until identified as such could lead to a poor care outcome. A better awareness amongst EMS providers of the prevalence of transgender people in the general population may contribute to an increased appreciation for the necessity of education on the topic of caring for them.

Another possible explanation for the significant lack of enthusiasm amongst EMS providers could be a lack of understanding of the physiological, psychosocial and operational considerations that must be taken into account when caring for a transgender patient.

Researchers read many responses to open-ended questions along the lines of “Each person should be treated equally, whether they are transgender or not. Treat the person for their signs and symptoms “¦ I think it’s a little overboard for needing a survey on this topic.” or “”¦ They should be treated as any other patient. “¦ everyone will be treated the same. With respect and to the best of our ability.” While these responses were assumed to be well intentioned, they neglect to consider that different patient populations do require adjustments in assessment and treatment to provide optimal care.

Certainly, EMS providers do not treat all patients the same; they treat femur fractures differently than asthma attacks, they treat confused dementia patients different than they do combative intoxicated patients, and they treat pediatrics differently than geriatrics. Caring for transgender patients can most often be accomplished without any special accommodation, but an awareness of when a change in assessment or treatment is indicated will allow for the provision of the highest level of care.

A significant number of transgender people who said they had a previous encounter with EMS complained they were misgendered, both intentionally and unintentionally, with some receiving and accepting apologies, while others were left feeling harassed.

Researchers also found that misconceptions about EMS care exist in the transgender population just as they exist in the general population. For example, one transgender patient complained about an EMS provider who asked them about their stuffed cats while they were vomiting into a trash can. Certainly, one can imagine that the EMS provider may have just been trying to make friendly conversation, but anxieties in the patient population based on actual incidences of transphobia, like the death of Tyra Hunter, can lead them to perceive other dissatisfactory experiences, like being asked to walk out to the ambulance or not receiving a requested dose of pain medication, as transphobic as well.

It is suggested that as EMS providers increase their competence when it comes to caring for these patients, that over many years, the reputation of EMS in the transgender community and the confidence of transgender patients in EMS providers will improve.

The information obtained through this research provides quantifiable data upon which this project team can build a curriculum. With an awareness of the challenges posed by an audience that may have mixed feelings about the topic, educators will be able to develop material that is objective and avoids the potential pitfall of sociopolitical polarization.

This curriculum will satisfy the curiosity expressed by EMS providers about physiological topics while at the same time addressing the concerns expressed by transgender people about psychosocial issues.

An awareness of the discordant perceptions about the quality of care currently being provided may motivate EMS providers to take the education seriously. As educators develop the curriculum to address issues identified by researchers, they hope that it will lead to better outcomes as perceived by not only EMS providers, but also their transgender patients.

4.1.2021 0
Seth Bravinder said he saw no signs that Floyd was breathing or moving, and it appeared he was in cardiac arrest.