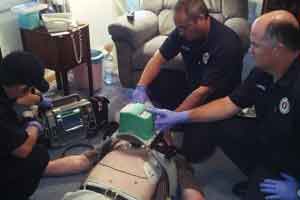 Watch how Cypress Creek (Texas) EMS has mastered the rapid application of the LUCUS 2 device.

Approximately 460,000 individuals die every year from out-of-hospital cardiac arrest (OHCA).(1) Studies have consistently shown only an average of 5—15% of patients treated with standard CPR survive cardiac arrest, and providing optimal blood flow to a patient in cardiac arrest by performing quality, uninterrupted CPR is uniformly thought to have a positive impact on improving overall survival.(2,3)

The quality of CPR has been an underappreciated factor and is only now beginning to emerge as an important aspect of successful resuscitation. Manual chest compressions are often done incorrectly, especially in the back of a moving ambulance, and incorrect chest compression can negatively impact survival.(4,5)

Fortunately, there are tools that hold promise for helping providers overcome these inaccuracies: mechanical CPR devices.

The Problem with Manual CPR
The quality of CPR is an important factor that contributes to survival in sudden cardiac arrest. In one experimental study, pigs received 4 minutes of VF and then 9 minutes of CPR before defibrillation. In the group that received suboptimal compressions (1.5 inches depth and 80 per minute), two out of nine pigs survived; in the group that received optimal compressions (2 inches depth and 100 per minute), eight of nine pigs survived.(6)

The study of adult patients from the Resuscitation Outcomes Consortium Cardiac Arrest Epistry with confirmed ventricular fibrillation (VF) or ventricular tachycardia (VT) has shown that increasing chest compression fraction (hands-on time) during out-of-hospital resuscitation of patients with VF/VT is an independent determinant of survival to hospital discharge.(7) However, three human observational studies showed that interruptions of chest compressions were common, averaging 24% to 57% of the total arrest time.(8)

Interrupting CPR can result in precious seconds lost in trying to “reprime” the pump and results in pooling of blood in the right ventricle. In a study looking at this important element of the pathophysiology of cardiac arrest, VF was induced in air-ventilated pigs, after which ventilation was withdrawn. During the first 3 minutes of VF, arterial blood was transported to the venous circulation, with the consequence that the left ventricle emptied and the right ventricle became greatly distended.

It took 2 minutes of mechanical CPR to re-establish an adequate coronary perfusion pressure, which was lost when interrupted. In this pig model, VF caused venous congestion, an empty left heart, and a greatly distended right heart within 3 minutes. Adequate heart massage before and during defibrillation greatly improved the likelihood of return of spontaneous circulation (ROSC).(9)

It is widely accepted that one of the best predictors of ROSC is attaining a coronary perfusion pressure (CPP) of more than 15 mm Hg in animals and humans.(10—18) Every interruption of CPR causes the CPP to drop immediately.In the same pig study referenced above, when VF was induced, CPP fell from 60 mmHg to 15 mmHg in 15 seconds and continued to plummet into negative numbers. After CPR was restarted, the CPP remained negative for the first minute; it took 90 seconds for it to get back up to 15 mmHg.

With manual CPR, many factors come into play, including fatigue, physical abilities, focus on several simultaneous tasks, poor-quality CPR during transportation on a stretcher and in the back of a transport vehicle, interruptions during movement of patient and variations in technique and training.

Just maintaining the proper rate is a major challenge. In one study, it was demonstrated that manual CPR resulted in a rate of less than 80 compressions/minute 37% of the time.(20) Other studies looked at the challenges in performing correct CPR in various settings. They found the following percentages of correctly performed CPR:
54—78% on the floor;
“¢ 46% in the back of a moving ambulance; and
“¢ 21% while transporting on a stretcher.(21,22)

Consistent-Quality CPR
The use of automatic mechanical CPR devices can provide a consistent rate and depth of compression and is one way of improving the quality of chest compression and contributing to EMS personnel safety.

There is compelling physiological and animal data suggesting that mechanical chest-compression devices are more effective than manual CPR. At best, standard manual CPR produces coronary and cerebral perfusion that is just 30% of normal.(25)

A study from Kramer-Johansen et al states, “The poorer results with sinusoidal than trapezoidal chest compressions add to the arguments that mechanical chest compressions can ensure better quality CPR for more than short intervals of time, unless the logistics around applying a mechanical device has too many negative effects.”(23)

These devices are also helpful in maintaining perfusion during cardiac arrest while undergoing a cardiac catheterization interventional procedure. The AHA 2010 Guidelines (Part 12: Cardiac Arrest in Special Situations) state: “Mechanical chest compression devices have been used successfully in an animal model and adult humans to provide maintenance of circulation in cardiac arrest while continuing a percutaneous coronary procedure. It is reasonable to use mechanical CPR during PCI (Class IIa, LOE C).”(33)

One area of concern with mechanical CPR devices has been the time off the chest while applying the device. However, in our experience with the LUCAS device in Columbus, Ohio, we have found that application takes only 15—60 seconds and that the time off the chest is minimal. In addition, it is important to take into account the total time on and off the chest. In a prehospital real-use study, the hands-off ratio with manual CPR was on average 22%; however, with mechanical CPR it was just 9%, as measured over the entire resuscitation episodes of approximately 33—40 minutes.

The interruptions in manual CPR increased from 19% on the scene to 27% during transport, whereas those with the mechanical CPR device stayed at the same low ratio (8—10%) both on scene and during transport.(34)

Another more practical concern is the cost of these devices. They can cost nearly the same as a monitor/defibrillator, a cost that many feel is too high for a mechanical device that is not as technology-packed as a cardiac monitor. In addition, one unit sold in the U.S., the ZOLL AutoPulse, has a one-time use band that must be replaced after each use; and this replacement cost is not currently reimbursed by most insurance agencies.

Piston chest compression devices have been shown to be actually less damaging than manual CPR.(39,40) Trauma, such as rib fractures, is an occasional occurrence in CPR and a complication of this and other mechanical devices.

The 2010 AHA Guidelines for Cardiopulmonary Resuscitation and Emergency Cardiovascular Care Science state, “There is insufficient evidence to support or refute the routine use of mechanical piston devices in the treatment of cardiac arrest. Mechanical piston devices may be considered for use by properly trained personnel in specific settings for the treatment of adult cardiac arrest in circumstances (e.g., during diagnostic and interventional procedures) that make manual resuscitation difficult (Class IIb, LOE C).”(41)

However, EMS insiders believe that the positive results being realized by EMS systems using mechanical CPR devices applied early and efficiently; the move to compressiond-only CPR and its proven efficacy; and the results of Dr. Idris’ study (see p. 4 of this supplement), which shows the need to keep compressions within a defined range of 100—120 compressions per minute, will result in a stronger position for mechanical CPR in the future.

A 2005 study demonstrated that incomplete chest recoil during CPR worsens hemodynamics. The study, although performed in piglets, indicated that leaning on the chest during CPR and not allowing the chest to fully expand on the upstroke led to worse systolic blood pressure, worse coronary perfusion pressure and substantially reduced myocardial blood flow.(42)

Initial studies of the device had found improved hemodynamic parameters and coronary perfusion pressures as well as improved prehospital survival to the emergency department.(43—47) Recent trials showed improved hemodynamics, with coronary perfusion pressures above the level generally associated with improved survival, as well as improvement in survival to arrival at the emergency department when compared with manual CPR.(17,43)

A multi-site cluster-randomized trial (ASPIRE) that the Columbus (Ohio) Division of Fire participated in was terminated early due to a lack of benefit and apparent harm.(48) It is believed that site-specific factors had led to the poorer results,49 and further clinical research is still ongoing.

The Columbus Experience
The Columbus (Ohio) Division of Fire has had the opportunity to use and evaluate several types of mechanical CPR devices. We used the Thumper devices in the 1970s and 1980s, and we were one of the participating systems in the ASPIRE trial, which provided exposure to the Autopulse device.

In July 2011, we put LUCAS devices on three of our EMS officer vehicles. In the first six months of usage, we used the devices 71 times. Although this was not a scientific study, our average ROSC rate with manual CPR was 30.5% and our hospital discharge rate was just 11.1%. With the LUCAS device it was 19% and 2.3%.

During the first six months of 2012, the ROSC rate and hospital discharge rate with manual CPR was 33% and 12% respectively and with the LUCAS it was 30% and 4%.

Our results are not as positive as some other systems that have mechanical CPR devices on all of their ALS vehicles because the LUCAS devices were only available on our EMS officer vehicles. Although manual CPR had been going on from the start of each arrest, the device was being applied late into most cardiac arrests. It was also being applied to patients who had not quickly converted from a ventricular fibrillation or ventricular tachycardia rhythm.

The Columbus Department of Fire EMS staff has a favorable attitude about mechanical CPR devices. The advantages in terms of job enhancement have already been discussed. In a survey we conducted, our EMS personnel reported the following:

Further studies are needed to truly determine the efficacy of mechanical CPR devices. The LINC study, a large RCT comparing LUCAS to manual CPR, is ongoing and expected to complete enrollment in the next few months. The LINC trial is a prospective randomized multicenter study where LUCAS will be used with simultaneous defibrillation compared to manual chest compressions. The study is being conducted in first-tier systems, where LUCAS always will be placed in the first-arriving ambulance.

There also has been promising research showing benefit of Active Compression Decompression CPR and it is expected that the LUCAS device and others will utilize this method of CPR in the future. Studies with these devices will also be critical in assessing the overall survival of patients receiving combined mechanical and ACD CPR.

David P. Keseg, MD, FACEP, is the medical director for the Columbus (Ohio) Division of Fire and associate professor of emergency medicine at the Ohio State University Wexner Medical Center. He can be reached at dkeseg@columbus.gov.

Disclosure: The author has reported no conflicts of interest with the sponsors of this supplement.