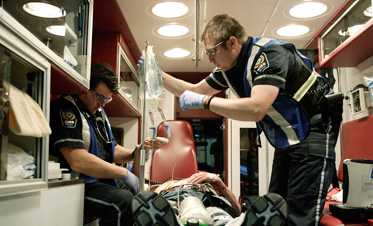 The Science
This study examined the management of seizure patients by Pittsburgh EMS paramedics. During the study period, they responded to 500 patients with the complaint of seizure and transported 97. Prehospital records were reviewed for patient and event characteristics, including past seizure history, seizure timing, level of consciousness, on-scene and transport times, and EMS interventions. Emergency department (ED) records were reviewed for recurrence of seizure activity, ED evaluation and disposition.

Additional seizure activity occurred in the prehospital and/or ED settings in 28 patients (28.9% of all cases), including 17 in the prehospital setting and 15 in the ED. Diazepam was administered by EMS for half of the eight (8.2%) patients who had seizures lasting more than one minute, while the remainder had seizures that were focal or spontaneously resolved.

The authors found “a lower-than-anticipated level of compliance with an ALS based prehospital seizure protocol, though patient-specific care appeared appropriate. Prehospital seizure patients have the potential for seizure recurrence and may benefit from focused ALS interventions, but their heterogeneity makes uniform protocols difficult to develop and follow.”

The Street
This study is interesting for two reasons. First, why was there such a low compliance rate to the seizure protocol that requires IV, cardiac monitoring and glucose level on all patients with a recent history of generalized seizure activity?

To understand this, perhaps we first need to understand why only 97 of 500 patient encounters resulted in transports. What was unique about them? It’s not uncommon for seizure patients to refuse transport, and little has been done to examine the frequency at which those that do sign against medical advice (AMA) have a recurrent seizure lasting more than a minute. But of the 97 patients transported, there appears to be nothing unique about them.

The authors also don’t provide us any information on what sets apart the 10 patients who apparently don’t meet the criteria for all ALS procedures. This is significant because with an N of only 87, small changes in the numbers results in significant changes in percentages.

Perhaps the medics in this system know something from their experience that helped them determine who needed an IV and who didn’t. Only 17 patients had a recurrent seizure activity. More significantly, only eight had seizure activity lasting more than one minute but just four received IV diazepam. The authors don’t tell us whether the four that did not get diazepam also did not have IVs. If this is the case, that would constitute a significant protocol compliance concern.

The second issue, and perhaps more significant question raised by this study, is what is the value of ALS care for the seizure patient in an urban all-ALS system? The average transport time was only 11 minutes. Scene times were about six minutes longer if an IV was established. No cardiac dysrhythmias were encountered, so the value of a cardiac monitor for these patients is questionable. The vast majority of the patients were alert, yet just 64% had their blood sugar checked.

I would suggest that the average BLS service would have a higher compliance rate, despite the fact that glucose monitoring is not in the new national scope of practice for EMT-Bs. Interestingly, only 63% of patients received oxygen, which, again, the vast majority of BLS services would have provided at a higher rate.

Perhaps this study suggests that rapid transport is preferable with greater adherence to BLS care in a single-tiered ALS system. This also suggests BLS transport can be safely considered in a tiered system if the patient is alert and the glucose is normal. Only additional studies in tiered systems with further review of the benefits of ALS procedures will help us know for sure.