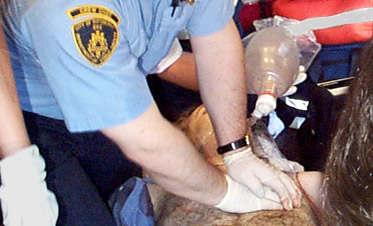 A 60-year-old male suffers a sudden cardiac arrest at a public venue. A bystander initiates CPR, and a security guard applies an AED, which delivers one shock. Pittsburgh EMS paramedics assigned to the site respond, along with Pittsburgh Medic 14, Rescue 2 and the field response EMS physician. The patient is found pulseless, apneic and in a pulseless electrical activity (PEA) rhythm on the monitor. IV access is obtained and the airway is secured via a King LT Airway with placement confirmed with waveform capnography.

After the administration of IV epinephrine, atropine and sodium bicarbonate, the patient has a return of pulses with sinus tachycardia on the monitor. The Pittsburgh EMS Post Cardiac Arrest Care Guidelines are initiated. Normoventilation at a rate of 10/min is performed to maintain an EtCO2 of 35 40 mmHg; 100 mg lidocaine IV push is administrated to stabilize the cardiac rhythm from the presumed V-fib that initiated the arrest; and the IV of normal saline (NSS) is run wide open while a 4 mcg/cc epinephrine drip is prepared and initiated at 4 mcg per minute to maintain the systolic blood pressure (SBP) between 110 140 mmHg. A second large-bore IV is initiated via the left external jugular vein and cold NSS is infused to induce therapeutic hypothermia. A blood glucose is found to be 92 mg/dL.

The patient is transported to a tertiary care facility, where he arrives normotensive and with spontaneous respirations. Induction of therapeutic hypothermia is continued and maintained for 24 hours, and the patient undergoes emergency cardiac catheterization, which demonstrates normal coronary anatomy and left ventricular function. After a few days, the patient awakens and is extubated with mild cognitive deficits that gradually resolve over time. The patient has an implanatable cardioverter defibrillator (AICD) placed and is discharged home on hospital day 21 with only very mild memory deficits for which he will continue to receive outpatient cognitive rehabilitation.

Post-Cardiac Arrest Syndrome
Despite recent improvements in cardiac arrest management in the field — primarily minimally interrupted CPR, which has resulted in a higher proportion of patients with return of spontaneous circulation (ROSC) — overall survival from out-of-hospital cardiac arrest (OOHCA) remains poor. The Ontario Prehospital Life Support Trial found that 72% of OOHCA patients regaining ROSC in the field died in the hospital, including 65% of those that initially survived to hospital admission.(1)

In response to the poor outcomes of survivors of OOHCA admitted to the hospital, the International Liaison Committee on Resuscitation (ILCOR) published a consensus statement on the management of Post-Cardiac Arrest Syndrome (PCAS) in 2008.(2) ILCOR defined PCAS as being caused by four key components: post-cardiac arrest brain injury, post-cardiac arrest myocardial dysfunction, systemic ischemia/reperfusion response and persistent precipitating pathology.(2)

Most of the initial interventions in managing PCAS — airway control, optimization of oxygenation and ventilation, hemodynamic support with fluids and vasopressors, screening for AMI, seizure and glycemic control, and induction of therapeutic hypothermia — can be accomplished in the prehospital setting. ILCOR defines the first 20 minutes after ROSC as the immediate phase of PCAS and from 20 minutes to six to 12 hours after ROSC as the early phase of the syndrome “when early interventions might be most effective.”(2) The immediate (and usually early) phases of PCAS involve prehospital interventions. In an effort to improve survival and functional outcomes of OOHCA patients, Pittsburgh EMS developed and implemented a Post Cardiac Arrest Care Guideline in 2009 closely modeled on the ILCOR guidelines for managing PCAS.

The Pittsburgh guideline exceeds the Pennsylvania Department of Health Post Cardiac Arrest Protocol, so authorization to initiate the guideline requires consultation with the medical command physician. The Pittsburgh guideline takes a team-based critical care approach to post-cardiac-arrest care based on having four paramedics on scene. One paramedic is tasked with airway management, another with electrical therapy and patient monitoring, and the remaining two paramedics are assigned to obtain vascular access and administer fluids and medications.

Airway: Initial priorities focus on securing the airway and assuring normoventilation. The airway manager secures the airway, if not previously accomplished, via endotracheal intubation or King LT airway as appropriate. Pittsburgh EMS airway management protocol requires that advanced airway placement be confirmed via three methods, one of which must be waveform capnography. Waveform capnography is also used to guide normoventilation. Hyperventilation must be avoided in the post-cardiac-arrest patient; hyperventilation can result in worsening brain ischemia by inducing cerebral vasoconstriction as the PaCO2 falls. The post-cardiac-arrest brain experiences blood flow dysfunction at the microvascular level that can result is persistent ischemia.(3) Hyperventilation below an EtCO2 of 32 mm/hg (assuming the patient is not hypotensive) can further impair cerebral blood flow and worsen this ischemic insult. In addition, hyperinflation of the chest can increase intrathoracic pressure and impede venous return to the heart, negatively impacting blood pressure. Our guideline recommends an initial ventilatory rate of 10 12 per minute titrated to maintain a SpO2 > 95% and an EtCO2 of 35 40 mm/hg.

Cardiac care: After the airway has been secured and normoventilation has been achieved, attention turns to stabilizing the cardiac rhythm and perfusion. If the patient presents in a perfusing but unstable tachycardia or bradycardia, it’s addressed via electrical therapy (synchronized cardioversion or external pacing) as appropriate. Stable arrhythmias may be addressed via medical therapy per the Pennsylvania State EMS protocol. If the patient presented as a V-fib or V-tach arrest, antiarrhythmic therapy should be initiated with either lidocaine 1 1.5 mg/kg or aminodarone 150 mg over 10 minutes. Some experts debate the role of prophylactic antiarrhythmic drugs if the patient doesn’t display further dysrhythmia.

Perfusion: Maintaining adequate perfusion is vital to protecting the heart and brain. One human study demonstrated improved neurological outcomes in post-arrest patients who had their mean arterial pressure (MAP) maintained at greater than 100 mm/Hg during the first two hours after the arrest.(4) Adequate perfusion supports coronary and cerebral perfusion pressures. Mild hypertension may be needed to overcome the post-arrest microvascular circulatory dysfunction in the brain.(2) The Pittsburgh EMS guideline recommends maintaining an SBP of 110 140 through aggressive use of fluids and vasopressors. The blood pressure is initially addressed by running the NSS in the existing IV line wide open (assuming that IV access is present) in 500 cc boluses as needed to total two liters. If hypothermia has been initiated, the cold NSS may be used for these fluid boluses.

Epinephrine: While the fluid boluses are being administered, an epinephrine drip is prepared and then initiated. We start this early, even if the blood pressure is in a “normal” range of 110 140 systolic to pre-empt the frequent post-ROSC decrease in blood pressure. This drop may result from “wash out” of epinephrine and other vasoactive agents given during the resuscitation, post-arrest myocardial left ventricular dysfunction, vasodilation from whole body ischemia and lactic acidosis and post-ROSC adrenal suppression.(5) Animal models have demonstrated the need for vasopressors to maintain post-ROSC blood pressure.

12-lead ECG: The next priority is to acquire, evaluate and transmit a 12-lead ECG to the receiving facility. A significant number of patients suffer cardiac arrest as a result of acute coronary syndrome (ACS). In one study, 77% of patients with ROSC after OOHCA underwent emergent coronary angiography, and more than 80% of these patients had total occlusion of a major coronary artery. Nearly half of these patients underwent a reperfusion intervention.(7) Acquiring a 12-lead ECG on post-cardiac-arrest patients in the field allows for early identification of acute infarct or ischemia. This can be used to guide for therapy, such as volume support for right ventricular infarction, and to give early notification to the receiving facility to activate the cardiac catheterization lab, thereby reducing door-to-balloon time. Reduced door-to-balloon time, especially under 90 minutes, results in improved outcomes for acute MI.(8) Pittsburgh EMS digitally transmits 12-lead ECGs to the receiving facility via cell phone.

Glycemic and seizure control: A blood glucose level is checked and if the patient is found to be hypoglycemic (< 60 mg/dL), 50 cc of D50W is administered IV push. Seizure activity increases cerebral metabolic demand and can cause exacerbate post-arrest brain injury.(9) So any seizure activity is immediately treated with an initial dose of 10 mg of IV diazepam with additional doses as needed. This dosage of diazepam is also used to treat shivering occurring during induced hypothermia because shivering will result in warming.

Transport: Finally, our post cardiac arrest care guideline recommends transport of post-arrest patients to tertiary care facilities that can continue interventions initiated in the field, such as hypothermia, and provide optimal critical care and emergent cardiac interventions. At a minimum, receiving facilities must have 24/7 emergent cardiac catheterization capability and perform post-arrest therapeutic hypothermia. In addition, facilities caring for post-cardiac-arrest patients should be able to provide optimized critical care, such as fever and seizure management, and mechanical cardiac support.

Summary
Prehospital management of OOHCA doesn’t end with ROSC. EMS systems must aggressively manage PCAS to give their patients the best chance of survival with intact cerebral function. At Pittsburgh EMS, we believe that a critical care, team-based approach that addresses post-arrest brain injury and myocardial dysfunction, systemic ischemia/reperfusion response and any persistent precipitating pathology affords these patients that best chance for an optimal outcome.

Mark E. Pinchalk, MS, EMT-P, is a paramedic crew chief with the City of Pittsburgh EMS and an adjunct instructor in the University of Pittsburgh Emergency Medicine Program. He has more than 23 years of experience as a prehospital provider, including an extensive background in special operations, research and education. Pinchalk was the 2009 Pennsylvania Paramedic of the Year. He can be contacted at Mark.pinchalk@city.pittsburgh.pa.us.