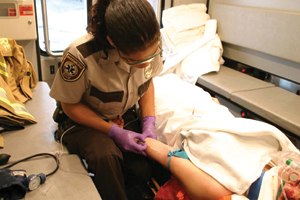 Please join me in giving a big thank you to Elizabeth Criss, RN, MED, MS, CEN, CCRN, for more than a decade of service to this column. Her long-term unwavering commitment to relevant research has made our profession better.

This month, as I pick up the reins, you’ll see several new features to the column. The glossary will translate research jargon into regular human language, and the “bottom line” will answer the question we all have when reading research: “How will this affect my day-to-day practice?” The “watch box” will highlight projects that are ongoing or in preliminary abstract form. Please send me your feedback and be sure to let me know if you like this approach and tell me about any research you’d like to see.

It’s rare to see research initiated by EMS providers, and it’s even more rare for it to be a randomized, controlled prospective prehospital trial. This study meets the expectations of rigorous research requirements, and its Australian authors should be commended for getting it published in a prestigious medical journal clear across the globe.

When it comes to oxygen (O2), we often think “more is good.” We attach high-flow oxygen (HFO2) via mask and are surprised and maybe a little annoyed when we see the hospitals immediately switch to a nasal cannula (NC).

This trial compared outcomes of 405 patients receiving titrated O2 (n=179) via NC versus HFO2 (n=226) by non-rebreather mask (NRB). The trial included patients who were experiencing acute chronic obstructive pulmonary disease (COPD) exacerbation or shortness of breath with a history of more than 10 years of smoking.
Using computer randomization, paramedics were selected into two groups: a NC group and a HFO by NRB group. Blood gases and length of hospital stay were also compared. The primary goal was to measure their mortality.

The results showed that patients who received titrated oxygen via NC in the prehospital setting had a reduced risk of death from respiratory failure by 58% for all patients experiencing shortness of breath and 78% for COPD patients.

The HFO2 group had increased carbon dioxide (hypercapnea) and respiratory acidosis, which are associated with bad outcomes. One out of every 14 confirmed COPD patients who received NRB oxygen died. In contrast, the patients treated with NCs were significantly less likely to have respiratory acidosis or hypercapnia at
the hospital.

Limitations: Thirty-seven percent of patients in this study weren’t treated according to the protocol. Was this because paramedics in the two randomized groups sometimes worked together? Did the sickest patients, inherently more likely to die, get HFO2 despite study protocols?

We’re not sure, but one thing is clear: Although the findings of this prehospital study confirm other in-hospital studies and compel us to change, our culture of “more oxygen is always better” will be difficult
to challenge.

Bottom Line
The 2010 American Heart Association (AHA) guidelines direct us to a more careful and monitored administration of oxygen via capnography and pulse oximetry. Hospital studies show increased mortality with HFO2 use in COPD patients.

This study adds strong evidence of harm from high-flow oxygen (NNH = 14); and if your protocols allow it, strong evidence can be found for titrating oxygen therapy to maintain saturations of 88—92% in patients with COPD exacerbation.

*Disclaimer: Always discuss care delivery and protocol changes with your medical director before implementing them. Don’t be surprised if the conclusion of all research is “more research is needed” or “no single study should change our practice.” JEMS

This article originally appeared in December 2010 JEMS as “Research Review.”

Prospective trial: A research project that defines an objective to be studied, then collects data going forward in a defined time period. This is the opposite of a retrospective study, where past records are reviewed.

NNH: Number needed to harm relates to the number of patients who would need to be exposed to a particular treatment before one is harmed by that treatment. It’s used to identify the risk of an intervention. It’s similar to NNT (number needed to treat), but NNT refers to the number of patients that would be treated before one of them will likely see a benefit from the intervention.