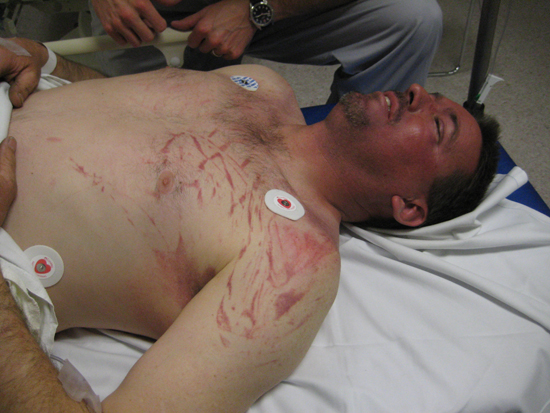 A 43-year-old male without any significant past medical history was working under his Jeep when the transmission slipped into neutral, and the vehicle rolled onto the left side of his chest. The patient was pinned, and, at some point during the entrapment, lost consciousness.

The wheel of the Jeep remained on his chest for approximately two minutes until bystanders were able to move the vehicle off his chest. EMS was summoned, and on arrival, providers found the patient non-ambulatory and complaining of chest pain, which was exacerbated with inspiration.

The crew’s primary survey revealed a patent airway; breath sounds were equal bilaterally with good chest wall excursion and breathing without the use of any accessory muscles. He was alert but somewhat confused, with a Glasgow Coma Score (GCS) of 13, and distal pulses were strong and symmetrical.

Paramedics then turned to the secondary survey. The head was atraumatic and his neck non-tender. They noted prominent subconjunctival hemorrhages in both eyes. The chest was tender on the left side, with an ecchymosis in the pattern of a tire beginning to appear on the skin of the left upper anterior chest but no chest wall instability.

His abdomen was also atraumatic in appearance and non-tender, and his pelvis was stable. His extremities were unremarkable with equal pulses, and he exhibited normal motor and sensory function. There was evidence of urinary incontinence.

A brief neurological exam was completed, and no focal deficits were noted. His blood pressure was 170/101 mmHg; pulse was 102, and respiratory rate was 24. Pulse oximetry on scene was 96% on room air. The patient was placed on a cardiac monitor, which revealed sinus tachycardia without ectopy.

Due to the injuries suspected by the EMS providers and the distance of the nearest Level I trauma center, a medical helicopter was summoned. Prior to helicopter arrival, the patient was placed in full spinal motion restriction, an IV established and supplemental oxygen provided via non-rebreather mask. He was continuously monitored and reassessed and then handed off to the flight crew. Following their assessment, he was transported to University Medical Center (UMC) in Las Vegas for definitive care.

Upon arrival at UMC, the patient was promptly assessed. By that point, he had developed diffuse confluent petechiae involving his entire face and neck, with craniocervical cyanosis. The subconjunctival hemorrhages seen by the paramedics were also noted, as were petechiae of the palate. A tire mark was present across the anterior surface of his left chest, with associated tenderness.

These findings all pointed to a presumptive diagnosis of traumatic asphyxia. There was no thoracic wall crepitus or subcutaneous emphysema. The patient had some generalized ocular discomfort, but there were no appreciable retinal hemorrhages, and his visual fields were intact. His mental status had improved to a GCS of 14 at the time of arrival and returned to normal within one hour.

The patient received 50 mcg of IV fentanyl for pain. The emergency physicians performed a bedside focused assessment with sonography for trauma (FAST) exam, which was negative for any intraperitoneal or pericardial fluid. Based on the significant mechanism of injury and the physical exam findings, the patient underwent extensive CT imaging in the trauma center.

The only acute finding was a nondisplaced left seventh rib fracture, without evidence of pneumothorax, hemothorax or pulmonary contusion. Bedside echocardiography demonstrated no evidence of myocardial contusion or hemopericardium. He was admitted to the trauma ICU with a diagnosis of thoracic crush injury resulting in traumatic asphyxia; he was observed in the hospital for two days and discharged home in improved condition.

Discussion
Traumatic asphyxia, also called Perthes syndrome, is relatively rare. In fact, despite being widely recognized, there’s comparatively little in the medical literature regarding the condition beyond case reports, so its true incidence is unknown.

Traumatic asphyxia was first recognized in 1837 during autopsies of multiple individuals who had been trampled by crowds in Paris. French physician Charles-Prosper Ollivier d’Angers noted a pattern of craniocervical cyanosis, subconjunctival hemorrhages and cerebrovascular engorgement, and called the syndrome masque ecchymotic.1

The mechanism of injury in traumatic asphyxia is usually a crush by an object that compresses the chest or upper abdomen. It’s most commonly seen in motor vehicle collisions (MVCs) in which victims are ejected from a vehicle that subsequently rolls over their torso.

Another common etiology includes individuals being pinned underneath an object. This may inadvertently occur while working under a vehicle, as in this case. Traumatic asphyxia can also be seen in those who work around heavy equipment in industrial, farming and construction settings, as well as in trench collapses.3

The exact pathophysiology of traumatic asphyxia is still not fully understood. However, the prevailing theory is that the acute compression of the chest results in increased intrathoracic pressure, driving blood from the right atrium and superior vena cava into the innominate (brachiocephalic) and jugular veins, which have valves that are unable to prevent backflow when encountering excessive pressure.

Compression against a closed glottis (Valsalva maneuver) may contribute to this increased intrathoracic pressure. The backpressure within the venous system causes the capillaries of the head and neck to become engorged with blood, resulting in the classic subconjunctival hemorrhages and petechiae, as well as soft tissue edema of the face. This engorgement ultimately results in stagnation of blood flow and subsequent localized blood desaturation (loss of oxygen), causing the characteristic craniocervical cyanosis. The duration and magnitude of the compressive force are both key factors in the development of traumatic asphyxia and potential death.4

The presence of traumatic asphyxia points to a serious mechanism of injury and is an indicator of severe trauma. Potentially life-threatening pulmonary injuries are common, and may include hemothoraces and/or pneumothoraces, pulmonary contusions or lacerations, and flail chest. There may be associated intra-abdominal or pelvic injuries, diaphragmatic rupture and skeletal fractures.

Fortunately, survivors of traumatic asphyxia are often reported to have full recovery at 12 months without long-term sequelae, other than the morbidity associated with the crush injury itself.5,6

Teaching Points
EMS textbooks have discussed traumatic asphyxia for many years, although most EMS providers have never seen the injury due to its rarity. Despite that, the signs and symptoms are fairly specific for the injury, and it’s critical for EMS providers to always consider the mechanism of injury when assessing a trauma patient. This is particularly important in cases in which an occupant is ejected from a vehicle and may have been crushed by a rolling car. Traumatic asphyxia should also be considered when a patient’s thorax is pinned by a heavy object, such as in this case, where the car was actually found on the patient.

In our case, the field personnel suspected potential major trauma and expedited transport to a Level I trauma center. It’s important to keep in mind that many of the classic signs and symptoms of traumatic asphyxia may not be initially present at the scene. As occurred in this case, the craniocervical cyanosis developed en route to the hospital and was apparent only when the patient arrived at the trauma center.

Summary
The case involved traumatic asphyxia that resulted from a thoracic crush injury. A high index of suspicion by EMS personnel in this case, along with proper prehospital and emergency department management, was lifesaving. Traumatic asphyxia is one of those rare conditions that should always be considered in the differential diagnosis of patients who sustain crushing chest and torso injuries.

The presence of subconjunctival hemorrhages, craniocervical cyanosis and facial edema with petechiae in such patients should suggest the presence of this potentially life-threatening condition.

A case from University Medical center in Las Vegas.