Is TXA a lifesaving drug that’s too cheap to bother using?

This is how the run sheet from an early morning bar fight describes the first patient to receive a lifesaving medication from Massachusetts paramedics under a new trauma protocol. The drug is tranexamic acid (TXA), and it currently costs EMS agencies about $30 a dose.

TXA is a generic drug that’s been around for decades, and in fact is sold over-the-counter in Europe and Japan for heavy menses. Delivered via IV to trauma patients, it’s been found to be lifesaving, with no dangerous side effects. It has the potential to save thousands of lives a year across the United States. And yet, very few EMS systems have incorporated it into their protocols.

The Magic of TXA

This isn’t a trivial distinction: There have been expensive pro-clotting agents brought out in recent years that, despite initial hype, turned out to have dangerous side-effects.

Meanwhile, TXA has coasted along, dirt-cheap, boring, generic and largely ignored. This despite more than 120 randomized controlled trials, the highest level of evidence, showing that it safely reduced bleeding in elective operations and procedures, in children and adults, from liver patients to cardiac surgery patients.1,2

It does so by stabilizing fibrin, the mesh-like fibers that are the infrastructure of a blood clot. As soon as clots form, the body starts dissolving them. The body releases tissue plasminogen activator (tPA)–the same as what’s pushed via IV as a clot-busting medication for some heart attacks and strokes.

The tPA activates plasmin, which attacks the fibrin mesh. TXA blocks this creation of plasmin, thereby protecting the newly-formed clot. Moreover, plasmin also has a pro-inflammatory effect, and blocking it has been shown to reduce inflammation.3,4

TXA’s long history of safe use in elective surgeries prompted consideration for more emergent situations–from injuries to life-threatening gastrointestinal or postpartum hemorrhages. In recent years, it’s been shown in some impressive studies, most notably a massive trial called CRASH-2, to be lifesaving.5

CRASH-2 randomized 20,000-plus trauma patients around the world to receive TXA or placebo in addition to usual care. Patients entered the trial if the treating physician felt they were “at risk of significant hemorrhage”–meaning that although some patients were obviously exsanguinating, others had stable vitals but were enrolled based on the physician’s overall impression.

TXA conferred a 1.5% survival advantage; that works out to a number needed to treat (NNT) of 67 patients to save one life. The survival advantage rises to 2.1% when it’s given in the first hour after a trauma–which is how EMS would use it. This works out to saving one life for every 48 patients treated. Put in financial terms, administering 48 doses of a $30 drug works out to $1,440 per life saved.

For the most critical trauma patients (i.e., those with systolic blood pressures below 75 mmHg), the NNT to save one life was even better at 22.

Epidemiologists in London looked at these results, looked at World Health Organization (WHO) trauma data, and concluded that broad use of this cheap drug across the U.S. could save 4,000 trauma patients each year.6

In April 2017, The Lancet published another massive, 20,000-patient randomized study of TXA in bleeding patients. This one, the WOMAN trial, looked at giving TXA for postpartum hemorrhage, which is a major killer of women around the world. Much like CRASH-2, the WOMAN trial showed a small, significant survival benefit, again with no adverse outcomes.7

TXA is available in trauma centers from London to Los Angeles; however, it hasn’t yet been embraced by U.S. prehospital providers.

In the more than seven years since CRASH-2 was published in The Lancet in 2010, TXA for trauma has been incorporated into U.S. and U.K. military protocols, is on British and Australian ambulances, and has been named by the World Health Organization (WHO) as among the essential drugs every healthcare system should have ready. TXA is available in trauma centers from London to Los Angeles; however, it hasn’t yet been embraced by U.S. prehospital providers.

The New York Times explored the slow adoption of TXA in a 2012 news article, noting that TXA was a cheap drug that the U.S. military felt was saving lives, and referencing a study estimating it could save 4,000 lives a year in the U.S. The authors then write, “Its very inexpensiveness has slowed its entry into American emergency rooms “¦ Because there is so little profit in it, the companies that make it do not champion it.”

In addition to the lack of financial interest in pushing TXA, a second reason for the slow adoption of TXA in the U.S. has to do with history: Having been unwittingly influenced at least twice by the pharmaceutical marketing of wonder drugs to stop bleeding (NovoSeven and Trasylol), many physicians aren’t rushing to embrace a third.

A third reason physicians have been slow to embrace TXA has been a misunderstanding of research coming out of the U.S. military, which has reported favorably on its use of TXA for combat injuries in Afghanistan.

Military trauma teams were desperate to save injured soldiers, and so they were routinely expanding the boundaries of trauma care–giving platelets and plasma; aggressively applying tourniquets; starting blood transfusions in helicopters and ambulances; and giving TXA, NovoSeven, and even cryoprecipitate (the frozen, pro-coagulant dregs that can be spun out of plasma in a centrifuge for concentrated clotting effect).

Trauma teams in Afghanistan and Iraq were changing their practice all of the time–it was a war zone, after all. Naturally, the doctors involved have been eager to share this costly experience from foreign battlefields.

Published in 2012, MATTERs reported that patients who got TXA tended to be more severely injured than those who didn’t. (This makes sense; these patients were crashing and looked awful, and doctors were desperately reaching for every available tool). Yet, even though these patients were the worst injured, they were most likely to survive.8

So, of 896 patients seen by U.S. and U.K. trauma teams in Afghanistan, 293 received TXA. Mortality was 17.4% among those who got TXA, 23.9% among those who didn’t.8 This suggests an NNT of seven crashing sick combat traumas to save one life.

MATTERs II, published a year later, reported similar findings, and the authors recommended liberal use of TXA in severe trauma.9

However, even though the MATTERs papers associated TXA with saving lives, it’s only an association: This wasn’t a placebo-controlled trial. There can be all sorts of confounding variables.

It’s a crucial point, because the MATTERs papers also report an association between receiving TXA and then developing downstream deep vein thrombosis or pulmonary embolism. Recall, however, that the demographics of these papers show clearly these were the sickest trauma patients. Because they were as sick/injured as they were, it’s possible clots were detected following TXA administration simply because of their level of injury/illness.

These tantalizing yet messy observational trials are difficult to draw conclusions from, and it’s a somewhat moot point based on the excellent randomized controlled trials discussed earlier that include 40,000 trauma and postpartum hemorrhage patients, with no signs of pathological clotting.

The St. Luke’s Hospital EMS system submitted a special project application to the state of Massachusetts and received approval for five local EMS agencies (including EasCare and Alert, and 9-1-1 services for the municipalities of New Bedford, Acushnet and Fairhaven) to begin using TXA at the beginning of 2016.

The project was launched in consultation with our colleagues at Rhode Island Hospital, our nearest trauma center, notably with the support of Charles Adams, MD, the head of trauma surgery. It involved training ED physicians on medical control aspects and paramedics on field use. All three major participants– the EMS companies, the St. Luke’s ED and the Rhode Island Hospital trauma services–collaborated in tracking data and outcomes. (We did so because as a new project it’s worthy of monitoring; it was not an experimental or research undertaking.)

Eligible patients were identified based on a modified version of the CRASH-2 protocol: Those with blunt or penetrating mechanisms suffered in the past three hours, appear age 16 or over and who show signs of internal hemorrhage (i.e., a systolic blood pressure less than 90 mmHg or a pulse of greater than 110 beats per minute) or who are considered to be at high risk of significant hemorrhage.

Note that even a patient with normal vital signs is eligible, as long as the paramedic believes they are at high risk of hemorrhaging. This is a field call that’s made immediately. Many patients thus may receive their 1 gram of IV TXA over about 10 minutes and yet, with the tests of time and computed tomography, declare themselves to not be hemorrhaging after all.

But that’s OK, because this all-comers treatment approach, employed in CRASH-2 across Europe, Africa and Asia, led to survival benefit without adverse outcomes. (CRASH-2 gave TXA up to eight hours out from the injury and found that after the 3-hour mark, it could be harmful in some cases.10)

Some have questioned this more liberal protocol. There have been suggestions that TXA should be reserved only for crashing patients receiving blood transfusions, for example, or that it should only be given after blood tests suggesting coagulopathy.11—15

But as The Lancet‘s CRASH-2 authors note–and advocate for in an over-the-top comic book drama (see Figure 1, p. 4)–TXA treatment is a numbers game: Critical, exsanguinating-in-front-of-me patients are far rarer than those who arrive meta-stable, but actually have occult internal hemorrhage.16

Figure 1: TXA is a numbers game 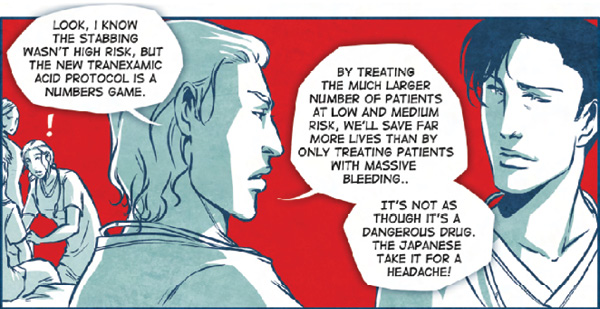 What happened to the patient at the bar with the multiple stab wounds? He received TXA and strong supportive trauma care. His chest was vented to relieve a tension pneumothorax and his life was just barely saved by Massachusetts paramedics and Rhode Island ED and trauma teams.

His first few hours were so tenuous that this man–the first to receive prehospital TXA in our protocol–is somewhat legendary in local EMS circles. Many agree with Brian Giorgianni, a paramedic and the St. Luke’s Hospital EMS coordinator in charge of the TXA project, who insists, “TXA saved that guy’s life.” (Disagreeing and trying to argue that technically we can never know that for sure is usually met with a silencing wave.)

In spring 2017, the data was presented to the Massachusetts Medical Services Committee (MSC) and included more than 40 patients treated with TXA, including gunshot wounds, rollover MVCs and falls off of buildings. The physicians on the MSC voted for an emergency update of the state EMS treatment protocols.

That same spring, after many months of receiving southern Massachusetts trauma patients who’d been treated with TXA in the field, Rhode Island state protocols were also updated to include prehospital TXA.

I’ve done some informal, back-of-the-envelope math, trying to guess how many lives prehospital use of TXA might save. In 2012, there were 3,053 trauma deaths in Massachusetts. Assuming that half of these deaths occurred on scene (which is in line with national averages), and that half of the remaining patients died of internal bleeding, a 2% survival benefit from TXA might save 15 Massachusetts lives a year.

That’s not a peer-reviewed number, but it’s in the ballpark. That’s pretty exciting for something that’s arguably safer than normal saline–and almost as cheap. It may be time to start thinking of TXA as “aspirin” for trauma.