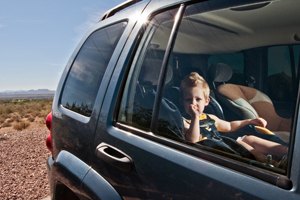 Vehicular hyperthermia is an uncommon but preventable cause of heat stroke in young children. As children are placed out of sight in the back seat of vehicles, the incidence of deaths due to vehicular hyperthermia has increased. Young children trapped in hot vehicles may present with heat stroke. They have core body temperatures of greater than 100Ëš F and have neurologic dysfunction. Acute management primarily requires cardiovascular resuscitation for dehydration or shock and rapid cooling.

Case
On a typical weekday morning, a busy mother places her 10-month-old daughter in one of the rear-facing car seats in the family’s SUV and sets off to drop her daughter at daycare before heading to work.  Fatigued and distracted, the mother stops to get gas and then drives to her office, grabs her purse from the front passenger seat, and heads in to start her workday. Twenty minutes later, she receives a call from the daycare asking if her daughter will be absent today. Panicked, the mother realizes that the sleeping baby is still in her car seat in the parked car in the sun. When she reaches the car the baby is hot, difficult to arouse and breathing fast. She calls 9-1-1.

The EMS providers who arrive on scene recognize that the baby is suffering from heat stroke.  This brings up some questions. Why are the crews seeing this more often? What is the pathophysiology of vehicular hyperthermia? What are the most effective management strategies in the field for BLS vs. ALS providers?

Epidemiology
Vehicular hyperthermia in young children is an increasing cause of mortality. Introduction of guidelines encouraging parents to restrain young children in backseats were introduced in the 1990s as injuries and fatalities from airbag deployments became more common. As an unintended consequence of this very successful public health intervention, combined with increasing distraction from cell phones and busy schedules, the frequency of children being left in cars increased because children in car seats are now less visible to drivers.

Prior to the mid-1990s, there were less than 10 pediatric deaths per year in the U.S. due to vehicular hyperthermia. Between 1998 and 2012, that number increased to an estimated 559, an average of 38 deaths per year. More than two-thirds of these deaths were in children younger than age 3. The most common reason given by caregivers of these victims in media reports is that they forgot the child was in the vehicle. Other reasons included that the child was playing unattended in the vehicle or that the caregiver left the child in the vehicle intentionally.

The burden of deaths due to vehicular hyperthermia also reflects weather patterns, as major metropolitan areas in the southern U. S. experience a higher proportion of deaths.1-3

Pathophysiology of Hyperthermia
Although vehicular entrapment quickly results in hyperthermia in victims of all ages, children are especially vulnerable to the effects of heat stroke. Compared to adults, they have a more susceptible surface area that can absorb heat and immature thermoregulation. Additionally, young children strapped into a car seat are both developmentally and physically unable to extricate themselves from a vehicle, remove clothing to help manage heat or drink fluids to manage dehydration.

Heat stroke is the most severe form of heat illness. It usually consists of a core body temperature greater than or equal to 104Ëš F and neurologic dysfunction, such as disorientation, delirium, seizures, or coma. The pathophysiology of heat stroke in children relates to the duration of exposure to heat. At the onset of heat stress, cardiac output increases and circulation is shunted peripherally to vasodilate skin and muscle to facilitate heat loss. Hyperthermia develops as the child is unable to dissipate heat with prolonged exposure and can no longer maintain a normal core body temperature. As it progresses, dehydration and electrolyte abnormalities develop, particularly hypernatremia due to water loss and hypocalcemia due to skeletal muscle degradation. These electrolyte abnormalities affect cardiac contractility and conduction, and impede the child’s ability to maintain an elevated cardiac output. In the presence of dehydration and vasodilation, this drop in cardiac output leads to hypotension.

As the duration of exposure increases, endothelial damage occurs to the microvasculature and children may develop cutaneous signs of coagulopathy, including petechiae and purpura. Terminal hyperthermia results in cardiac arrhythmias and deep gasping.6-8 In a series of autopsies of children who died from vehicular hyperthermia, the most consistent finding was intrathoracic petechiae, presumed to be due to deep gasping.9 Although victims of heat stroke may progress to cerebral edema, multiorgan hemorrhage, and necrosis or rhabdomyolysis, these injuries are not believed to be present during acute heat stroke.9

Treatment of hyperthermia should begin with a thorough history and physical assessment. Often, but not always, the history or scene circumstances will provide clues to the cause of the patient’s condition. It’s important to initially keep a broad differential diagnosis, including infectious causes, toxic ingestions or exposures, or status epilepticus. Accordingly, the initial physical assessment and interventions should focus on routine resuscitation of airway, breathing and circulation.

Airway: Depending on the degree of hyperthermia and altered mental status, the child may require basic and advanced airway maneuvers, including bag-valve mask ventilation, supraglottic airway or endotracheal tube insertion, to maintain their airway and breathing.7,10

Breathing: All patients with suspected hyperthermia and altered mental status should receive treatment with supplemental oxygen because of the patient’s increased metabolic rate in the face of heat stress.

Circulation: At least one intraosseous (IO) or IV access point should be established. Children with vehicular hyperthermia are often only mildly hypovolemic, because there has been no exertion. An initial fluid bolus of 20 mL/Kg of either chilled or tepid isotonic crystalloid is appropriate initial treatment.11 Given the potential for electrolyte abnormalities, a 12-lead ECG may add to clinical management by ALS providers. The most common ECG finding in hyperthermia is sinus tachycardia; however, abnormal intervals, peaked t-waves, bradycardia, or a widened QRS complex are concerning for electrolyte abnormalities. For hyperthermic patients in shock, vasoactive agents, including calcium gluconate delivered via IV or intramuscularly, may need to be initiated to maintain normotension.7,11

Disability: A point-of-care blood glucose should be done to exclude hypoglycemia as a cause of altered mental status.10

Exposure: Core temperature should be measured rectally as rapidly as possible. Axillary, oral and tympanic temperatures are not accurate enough for diagnosis or treatment of hyperthermia.7,10—11 The goal of treatment is the initiation of cooling to a core temperature of 100° F as quickly as safely possible. Because morbidity and mortality are directly related to the duration of hyperthermia, aggressive cooling should begin in the field.10—13 Antipyretics do not have a role in treating environmental hyperthermia.

Heat stroke requires active cooling, but there’s no evidence-based best method for cooling in the pediatric population. Data from small trials and expert consensus suggest that evaporative cooling is the most appropriate and rapid method in the field.

The patient should be removed from the vehicle and stripped to bare skin. Room temperature water is effective for evaporative cooling and better tolerated than ice water. Once exposed, the patient should be sprayed with water or saline while being fanned manually or, preferably, by the ambulance fan or air conditioner. Evaporative cooling should be augmented with ice packs placed in the axilla, groin, and around the neck if the patient will tolerate it. To prevent hypothermia, cooling should be stopped once the goal temperature of 100° F has been achieved.  Midazolam 0.05—0.1 mg/kg IV/IO can be given for shivering or seizure. Shivering should be actively managed because it slows the rate of cooling.7, 10-11 Since patients will cool during transport, the concern for hyperthermia needs to be clearly conveyed to the receiving staff because the initial core temperature measured by hospital staff may be below 104° F.

Milder cases of heat illness can be treated by simply removing the patient from the vehicle and placing them in a cool environment. Oral or IV rehydration with an isotonic electrolyte solution may also aid recovery from heat exhaustion.

Transport: Hyperthermia requires recognition, stabilization, and initiation of treatment in the field, but this shouldn’t delay transport to definitive care. Local destination protocols for pediatric patients should be followed but, in general, these patients will benefit from being taken to a hospital with PICU facilities if one is available. Unstable patients should be taken to the nearest emergency department approved for children. Some patients may initially appear well after confinement in a hot vehicle, but if they have any elevation in core temperature, these patients should be evaluated by an emergency department to rule out electrolyte abnormalities or muscle breakdown that may not be apparent on initial exam and could develop hours after exposure. Children who have a normal mental status, were not exposed to very high temperatures and have a normal core temperature may be released to a reliable caregiver with advice to seek evaluation by their primary care physician, if allowed by local protocol.