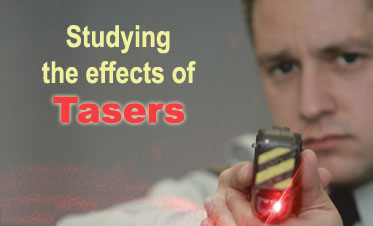 The Science
One hundred and five San Diego police officers who were being trained to use the Taser volunteered to have their hearts monitored using Zoll M series cardiac monitor/defibrillators. Their heart rates were monitored for five seconds before, during and after having the Taser deployed on them. The average length of shock was three seconds and in no case exceeded five seconds.

A statistical increase in heart rate occurred with deployment, though interestingly the heart rates before deployment tended to be tachycardic from presumed anxiety and apprehension. An attempt was made to measure changes in PR, QRS and QT intervals. However, this was unsuccessful because of the limitations of the using only 3-lead monitoring. The authors were able to document cases of both QT interval shortening as well as prolongation. One premature ventricular contraction (PVC) was documented, and no officer suffered any injury.

The concluded that a significant rise in pulse rate should be expected with Taser deployment and recommended further studies to better attempt to measure ECG interval changes.

The Street
The Taser is better referred to as a conductive energy device has been reported to be a contributing factor in in-custody deaths. The exact nature and extent of this contribution has yet to be determined. Subjects who have the Taser deployed are significantly different that these health yet anxious officers. They are also different than the anesthetized animals that much of the conductive energy device literature uses.

Subjects who die in-custody exhibit the condition known as excited delirium, which is precipitated by the stimulant agents such as methamphetamine and cocaine. These subjects also appear to be at higher risk of sudden death as a result of a higher incidence of significant heart disease and hypertension.

This study clearly provides us a baseline of pulse rate changes in the health human subject. I agree with the authors that additional studies should be performed to evaluate QT interval changes because QT prolongation increases the likelihood of V Tach or V Fib occurring. Additionally, further studies will be needed as Taser deploys its new models that deliver longer periods of sustained energy.