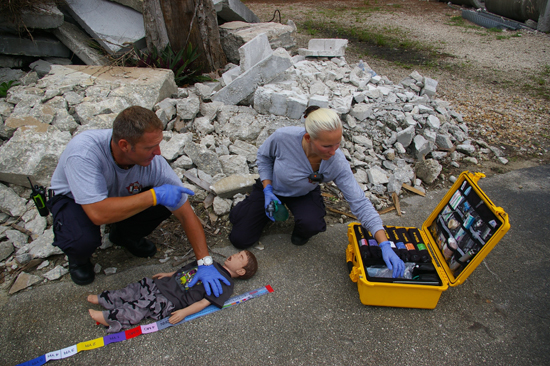 It’s summertime and a group of children is at a neighborhood pool party. Although there’s a designated adult to supervise the young swimmers, a scream fills the air as someone notices that a 3-year-old boy is submerged in the shallow end of the pool.

A frantic mother calls 9-1-1, trying to comprehend the basic maneuvers being described over the phone. Moments later, the tones sound loudly at your station, which is only six minutes away. As you climb into your unit, dispatch gives you the following information: “Ambulance 38, Engine 38, and Captain 65: Respond to a 3-year-old male unconscious and not breathing.”

Your heart starts to race even though this is your 15th year as a paramedic and you feel well versed in pediatric ALS. Pediatric calls always cause you intense anxiety. The six-minute race to the call seems to be taking forever. Your mind is preoccupied with the image of a 3-year-old whose future may be resting in your hands because you know that regaining a pulse on scene may have a significant effect on the neurologic outcome of this child and, therefore, could be the difference between life and death.

You prepare yourself mentally for what to expect, but everything you’ve learned can only be used after contact has been made with the patient. You can’t begin calculating drug dosages and equipment-sizing until you arrive on scene.

In contrast, a six-minute lead time for an adult cardiac arrest doesn’t provoke that same anxiety. You’ve played that scenario in your mind a thousand times. The 60-year-old with an un-witnessed cardiac arrest would be rapidly assessed, CPR started, an intraosseous (IO) device placed, a round of epinephrine 1:10,000, 10 cc IV administered, and defibrillation administered at 200 joules for a shockable rhythm. You would stay on scene for the initial phase, knowing the relationship between return of spontaneous circulation (ROSC) and a positive neurologic outcome.

These, however, are not the thoughts you’re having now as you make your way to the asystolic child who’s lying poolside.

As you approach the home, several family members are waving you down frantically. You know the pressure is on and you must take full command of the situation. The child’s family and onlookers have their eyes on you. The stakes are high in this low-volume, high-risk scenario, and the time to perform is now. 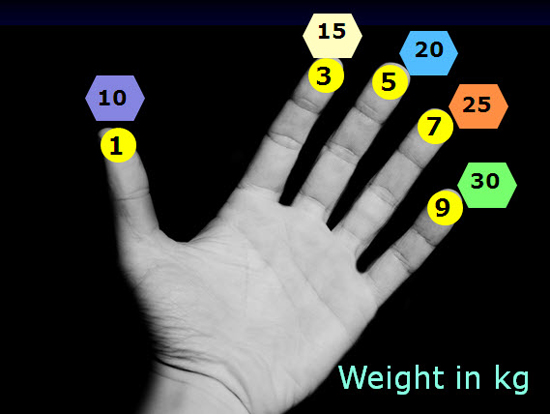 They expect you to begin revival measures immediately without skipping a beat and rapidly provide life-saving doses of medications–just like you would do in an adult cardiac arrest. But what actually happens is unfortunately not that sequence at all, because you don’t know the correct dose of epinephrine or defibrillation setting for this child, nor do you know the size of the IO needle, nasogastric tube, supraglottic airway or endotracheal (ET) tube needed. Based on your training and the tools provided to you, you can’t obtain this information until you arrive at the patient’s side.

You’re faced with a critical decision: obtain a length-based measurement, swiftly determine all drug calculations and administer the medications accurately, or nervously take the child back to the ambulance, close the doors and figure it all out en route.

If this scenario is familiar to you, you aren’t alone. Similar scenes are common in the field and in EDs nationwide. Most physicians and nurses also fear the sick infant or child arriving at their department often without more than a minute to prepare. Regardless of the child’s outcome, even at pediatric-specific centers, a pediatric resuscitation typically evokes feelings of stress and anxiousness.

Although I had trained at top pediatric programs, I can remember having a sense of uneasiness at the beginning of every shift. My first month as an attending physician at a children’s hospital with a dedicated pediatric emergency department was exciting to say the least. I had mentally prepared for almost anything to hit the door. However, just the thought of a pediatric cardiac arrest always made me anxious. I was never clear as to the exact source of the discomfort, yet I knew that the success of the team depended on the confidence of its leader and readiness of the supporting players.

My fears were realized during my first month on shift. Within a few days, EMS brought in two infants in full arrest. I felt the trepidation of the team, and the lack of preparedness was palpable. With each case, I called out drugs, equipment and other basic items. But each time I asked for something, I immediately received a question in return about equipment size or drug dosages.

When I did call out the dose of a drug, the nurses immediately grabbed the calculator. In a mad rush, they would calculate the dose once and then quickly again to check the initial calculation. Finally, another nurse would recheck the dosing for a third time. Time was of the essence, yet the choppy workflow was slow and allowed significant room for error.

The feeling of incompetence in the room was overwhelming. I began to realize that during each chaotic scenario, there was an undue reliance on a calculator or other team members for the correct drug dose or piece of equipment. I wondered why I felt this way after the numerous years of training with top-notch mentors. Why did all pediatric resuscitations seem so frenzied and mentally draining? Was it just the simple fact that these are children and “pediatric codes are never easy,” as we so often hear?

Recent pediatric simulation research has demonstrated that dosing errors in pediatrics occur in four domains: cognitive, procedural, affective and teamwork. The study showed that, overall, weights were inappropriately estimated, the Broselow Tape was used incorrectly, doses were recalled incorrectly and doses were not cross-checked.3

Years of performance anguish forced me to search for a better way. With each successive resuscitation, I became more frustrated with the process in place. Moreover, the parents’ discomfort with our approach was tangible. Necessity being the mother of invention, I began to rethink the current system and its problems to create a system that worked for me in the code room. I knew my confidence as an effective leader would invariably translate into improved teamwork, increased decisiveness, and most importantly, improved outcomes.

On a quiet Sunday morning in the ED, with fear as my driver, the answer became apparent. What if I could find a way to easily remember drug volumes by starting with a child’s age?

I began by writing down five ages and their corresponding weights using a modified formula put out by the American Academy of Pediatrics.4 Next, I listed the eight most critical drugs I thought would be most helpful to me during a frantic life-or-death situation. But instead of writing down the doses in milligrams, I determined each dose as a volume. A pattern emerged that was so simple to remember, it almost seemed too good to be true. 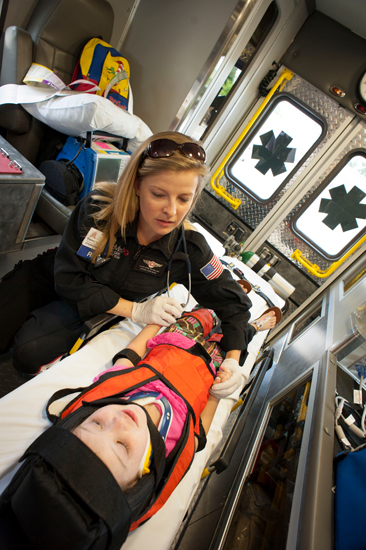 High-quality care should be provided to patients regardless of their age. Photo Julie Macie/WakeMed

That was the “ah ha!” moment. I could recite the volume of eight drugs for a child of any age. I easily committed it to memory and found myself testing this new-found secret during each patient encounter. The students shadowing me also learned it quickly after I reproduced for them the same spreadsheet I had created for myself. By the end of each shift, these clinical novices were now competent in their ability to determine the eight critical drugs for any child.

The big test came only days later when EMS rushed into the ED with a 1-year-old arrest. With my confidence now bolstered, I walked into the room and began CPR, then called out, “Epinephrine 1:10,000, 1 mL IV-push, normal saline 200 mL IV bolus, and prepare Amiodarone 1 mL IV.” The nurses around me were at first surprised; but they began to inquire, after every resuscitation, how I knew the doses as a volume instead of what they were used to–milligrams.

Eventually, I was asked to give a talk about this “new system” to a group of 200 paramedics and other healthcare providers. After watching how I used my hand to teach the method, someone said it should be called the “Handtevy,” a play on the word “hand” and my last name. The response to the lecture was overwhelming and completely unexpected. Seasoned paramedics, nurses and doctors approached the podium afterward to relay similar difficulties they experienced with pediatric resuscitation. At that moment, I knew others felt the same pain when treating critically ill pediatric patients. To my surprise, other content experts, including pediatric emergency medicine physicians, were eager to learn the method as well.

The Handtevy system, which includes customizable kits as well as use of the hand method, diverges from current conceptual framework. It uses both age and length for pediatric resuscitation decisions, and allows providers to begin considering treatment decisions prior to patient contact.

The Handtevy Method is taught by first associating five ages with their corresponding weights in kilograms via a finger counting method on your hand. To obtain the corresponding weight for each age, assign each finger a chronological odd number starting with 1: 1, 3, 5, 7, 9. Each finger represents an age in years. Then, using the same fingers, count up in 5s starting with 10: 10, 15, 20, 25 and 30 to obtain the corresponding ideal body weight in kilograms. For example, a 1-year-old ideally weighs 10 kg, a 3-year-old 15 kg, etc.

Once the weight has been determined, use the Handtevy Method to determine dosages for any of eight medications. For example, the pediatric does for epinephrine 1:10,000 can be determined by moving the decimal point of the child’s weight in kilograms over once to the left to determine the volume (mL) of the dosage.

Using a 5-year-old as an example, count to the third finger for the age (5) and again to the third finger for the weight (20). Once you have the weight as 20 kg, move the decimal point over once and you have the cardiac arrest epinephrine dose of 2 mL. The remaining drugs that are listed in the cards are epinephrine 1:1,000, amiodarone, sodium bicarbonate, dextrose, normal saline, lorazepam and diazepam. After mastering the Handtevy Method, providers can expand the technique to determine dosing for any patient. For example, a 2-year-old’s ideal body weight is 12 kg (round number between 1- and 3-year-old weights, 10 and 15 kg respectively). The corresponding epinephrine 1:10,000 dose for that child is 1.2 mL.

ROSC should ideally be achieved prior to departure from the scene. Airway maintenance and post-resuscitation care become top priorities en route to the closest appropriate facility. The entire sequence should appear effortless and smooth, creating the perception of impeccable excellence. Giving providers a method of calculation prior to arrival on the scene of a pediatric resuscitation helps them focus on the essential aspects of the call. With improved confidence, these essentials are accomplished rapidly on scene without hesitation or trepidation, and, most importantly, without the need for calculation of drug dosages.

The difficulty in treating critically ill children is pervasive The key to success in a pediatric resuscitation relies on access to tools and knowledge of reliable algorithms, but also the psychology of the provider. jems

0
You’re called to the scene of a medical emergency at a patient’s residence. As you enter the home, you find a patient with an altered level of consciousness on the couch in the living room.  On the table next to the couch you find what appears to be illegal drugs and drug paraphernalia. What are your obligations under the law? Must you report the suspected illegal drug activity to the police? Can you report it?