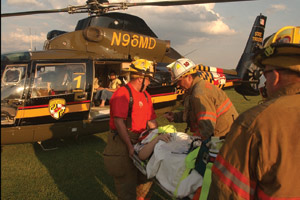 She never saw the truck. She had just dropped the kids off at school and was hoping to run some errands before she had to be at work. She edged her Escort out of the school parking lot to make a left turn onto the four-lane, trying to see around the truck parked on the northbound shoulder. She pulled out, and an F-150 impacted the driver’s door on the Escort. The collision was over in micro-seconds, with both vehicles coming to rest in the southbound lane.
Start the clock.

“˜60 Precious Minutes’
The “Golden Hour” was first described by R Adams Cowley, MD, at the University of Maryland Medical Center in Baltimore.1 From his personal experiences and observations in post-World War II Europe, and then in Baltimore in the 1960s, Dr. Cowley recognized that the sooner trauma patients reached definitive care–particularly if they arrived within 60 minutes of being injured–the better their chance of survival.

Field hospitals, MASH units and medevac helicopters in the Korean and Vietnam Wars contributed to increasing survival rates. Improvements in medications, techniques and instruments were key to survival, but none of these were of any value if the patient remained separated from the surgeon.

Over the years, we’ve debated whether the Golden Hour is actually 60 minutes, but Dr. Cowley’s concept remains true. Thirty-eight years after Maryland State Police Helicopter 1 picked up its first patient on Falls Road in Baltimore County and delivered him to Dr. Cowley’s team, the focus of EMS remains bringing the severely injured trauma patient and physician together as quickly as possible.

In this effort, we’ve gone from “load and go” to “stay and play” and back again. The ideal level of street medicine versus scene time remains somewhere in the middle. Time spent on scene changes each year with the advent of new tools and techniques and the results of valid studies.

Our job in EMS is threefold: 1) get to the patient quickly, 2) fix what we can fix and 3) quickly get the patient to the right hospital. Anything we can do to compress each of these time periods is good for the patient. We’ve known this in the traumatically injured, and now we use it for STEMI and stroke patients; more are sure to follow.

At 12 Minutes
She was unconscious and unresponsive when the medic unit arrived. Her head slumped to the side and frothy blood came from her mouth with each shallow breath. While Rescue Squad 7 worked to free her, the medics brought her head into neutral alignment and tried to open her airway. With a clenched jaw and obvious facial fractures, both an oropharyngeal airway (OPA) and naso­pharyngeal airway (NPA) were out of the question. Working together, the medics used a bag-valve mask, suction and cricoid pressure to optimize oxygenation and ventilation.

It’s About Perfusion
I used to use the term “airway management,” but the words seem to imply our job is done when we successfully get air through the glottis and into the lungs. I tried “respiratory management.” Yes, that’s it; secure an air passage, inflate and deflate the lungs. No, that’s not it either.

I’ve settled, for now at least, on “perfusion management.” Our lifesaving job is to return and maintain our patient’s cellular perfusion, and then get them promptly to the right facility.

How are the Golden Hour and perfusion management related? Without prudent management of both, we fail our patient. Almost every lifesaving intervention we perform has to do with establishing or maintaining cellular perfusion. An AED allows the heart to return to a perfusing rhythm. Allowing the hypotensive patient to breathe on their own instead of paralyzing them encourages blood return to central circulation. Decompressing the chest, stopping bleeding, capturing the airway and ventilating patients with poor oxygen saturation all improves perfusion.

So, in the field, the burden of responsibility is on us. With the critically sick or injured patient, we must look at on-scene interventions with a cynical eye. Does the procedure enhance perfusion? Must it be done now?

Prehospital Intubation–A Good Thing, Sometimes
We’ve all read and heard that paramedics shouldn’t intubate: “It’s a skill better left for those in the hospital.” But field intubation is a good thing. It secures our patient’s airway. It allows us to properly oxygenate and ventilate patients. It’s usually completed swiftly and appropriately.

But field intubation can be a bad thing. When we make poor decisions and fail to execute the skills we were taught, we extend scene time and create hypoxic patients. When we fail to give post-intubation management the proper attention, it leads to unrecognized misplaced tubes, inappropriate ventilation and poor oxygenation.

We intubate patients in the prehospital environment for three primary reasons: 1) establish and maintain an airway, 2) normalize oxygenation, and 3) establish appropriate ventilation.2 Although field intubation can be a good thing for the patient, it’s not always the right thing for them.

So, when do you intubate the patient? When it will make them better or keep them from getting worse. Do you intubate at the scene or during transport? Both. We should intubate when it’s most appropriate. Consider these factors:

If you get the patient to the hospital bagging them to sats of 96% with an OPA in place and no gastric inflation, you’re my perfusion management hero. Ditto if you do it with an ET tube. But if you spend 20 minutes on scene, rooting and digging in a patient’s throat, making multiple intubation attempts and letting their sats drop to 85%, we need to have a talk. “Do what’s best for the patient,” says Maryland State Aeromedical Director Douglas Floccare, MD, “and you can’t go wrong.”2

Studies on the frequency of difficult intubations are almost completely limited to operating room (OR) or intensive care unit (ICU) patients. The number of studies regarding EMS and ED intubations pales drastically in comparison. Those that have been done focus primarily on the rate of undetected esophageal intubations received at EDs and complications associated with intubations done outside the OR.

Until we have studies that focus on difficult intubations in the prehospital arena, we have to rely on these OR and ICU reports. Do the results of these studies reveal poor intubation technique or poor post-intubation management? Are poor intubation outcomes the result of training, technique, tools, experience or conditions? And do these factors negatively affect the time to definitive care?

At 32 Minutes
The helicopter landed as the patient was freed from the car and moved to the medic unit. It was a 42-minute drive to the only hospital in the county or an 18-minute flight to the trauma center. Seemed like an easy choice, but she was now incredibly combative, so much so that the crew could hardly secure her to the backboard let alone safely fly her out.

As the minutes ticked away, the easy choice was becoming a tough decision. Tough, until the senior paramedic on scene was able to get an 18 gauge IV”ˆin the patient’s hand; holding it securely as lidocaine, etomidate and succinylcholine were pushed.

The intubation was performed using a GlideScope® Ranger video laryngoscope, with a clear view on first attempt. Her sats rose to 98% and EtCO2 to 35. She was secured to the board and loaded in the aircraft. As the succinylcholine wore off, the two helicopter paramedics assisted her ventilations enough to maintain high sats, but didn’t over-ventilate her and drive blood from her central circulation.

Now Versus Next
I’m a dinosaur. I look at new technology with a suspicious eye. I see no reason to change for the sake of change. For instance, I finally purchased a PDA cell phone recently, and I realized what everyone seems to have known for years–they’re amazing.

The first time I saw a video laryngoscope, I felt much the same way I initially did about the PDA: That’s a lot of money for a camera and some lights. I also thought, I’ve done just fine with my bent metal stick for the past two decades, why should I change now? However, having used the device, I know why. Because it’s a better way to deliver patient care, with less opportunity for physical trauma to the patient, quicker visualization of the glottis and enhanced verification of endotracheal tube placement.

Straight or curved direct laryngoscopy blades are de­signed to move the anatomy to obtain a line-of-sight glottic view. Head-neck manipulation, tongue displacement, direct contact with laryngeal structures, and impacting teeth are all opportunities to injure a patient.

Unlike classic laryngoscope blades, video laryngoscope blades are shaped to match the pharyngeal anatomy. The acute blade angle allows the blade’s tip (and camera) to follow the patient’s anatomy to view the glottis. Multiple studies have found that 20­—40 lbs. of force is required during direct laryngoscopy, and it takes about 45 lbs. of pressure to fracture a tooth during laryngoscopy.4,5 My own, purely subjective, experience with video laryngoscopy is that much less force is needed to obtain a glottic view. I’d like to see studies that validate or dispute my experience.

If you’ve ever had to do a belly flop on the ground to see the cords of a patient, you’ll appreciate video laryngoscopy. The blade goes in the patient’s mouth and the video monitor is placed where you can see it. This makes visualization easier in a moving ambulance or helicopter, and has the potential to save scene time by allowing you to intubate easier during transport. The image on the monitor is larger than the view afforded by direct visualization. The clear detail provided on the screen allows for confident and quick landmark identification.

So, what’s the role of video laryngoscopy in prehospital medicine? Time for my predictions. It will become the standard of care, just like AEDs and 12-lead monitors. When our EMS children visit us in nursing homes, we’ll tell them tales of wasting precious minutes lying on the floor of someone’s home, using a light bulb and a metal stick to intubate patients.

At 65 Minutes
The aircraft settled onto the roof, and its rotors slowed to flight idle. She was moved to the waiting stretcher and then down the elevator to the trauma room. Masked, gowned and gloved, the trauma team swarmed around her–65 minutes from impact to surgeon.

Conclusion
For video laryngoscopy to truly enter the world of prehospital medicine, a paradigm shift must occur–a shift away from direct visualization. Cliff Boehm, MD, an attending anesthesiologist and assistant professor of trauma anesthesiology at the R Adams Cowley Shock Trauma Center, describes how it worked in his department: “There used to be two camps when direct laryngoscopy failed: the Bullard (rigid fiber-optic laryngoscope) and the LMA (laryngeal mask airway). Now there’s pretty much one camp–video laryngoscopy.”

Boehm adds that when video laryngoscopy first appeared as an anesthesia tool in his department, “that camera thing” was used when all other means failed. He and his colleagues now routinely use their GlideScope units as first-line tools, not just as a backup.6

As video laryngoscopy continues to evolve, I’d like to see the ability to digitally record images for QA, patient records and education. I’d like to see the camera and light in a standalone handle, and the image beamed to the multi-function display on our vital signs monitor. Better yet, maybe we could have it recorded on our monitor and also transmitted to the heads-up display on our safety glasses, so we can view the glottis and simultaneously see the patient’s heart rate and oxygen saturation.
We live at an incredibly exciting time in history, especially in medicine. Da Vinci robotic surgery, STEMI intervention, laparoscopic surgery and a multitude of other tools and procedures are developed each week. Video laryngoscopy is one of them. It’s a great tool for us in medicine, and it’s an important tool for our patients.

Although I’m not ready to put my 4 Mac or 3 Miller on eBay, I can’t wait to see what awaits us.