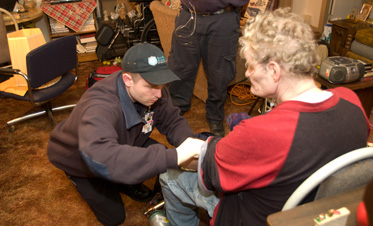 The 2008 Report on Older Americans issued by the Federal Interagency Forum on Aging-Related Statistics continues to emphasize that the U.S. population is becoming older. Although no surprise to EMS providers who encounter this population on a daily basis, the 2008 report points out that the U.S. population of 65 and older is now greater than 37 million, accounting for more than 12% of the total population. This statistic takes on new meaning when you consider that this segment of the population has grown from 3 million to 37 million in the 1900s alone and that with the Baby Boomer generation retiring it’s expected to reach 71.5 million by 2030.

A closer look at these statistics also reveals that the geriatric population of 85 and older will reach close to 10 million in the same time period. These statistics are important for EMS agencies to consider because the rising geriatric population, along with an increased level of independence in this age group, will place an increased demand on EMS and trauma systems. As EMS agencies develop plans to deal with this increasing patient population, it’s also important that our personnel understand how assessment and clinical parameters will change as well.

Typical MOIs
Mechanism of injury (MOI) has long been used as a guide for gauging the potential for injury severity. Despite recent scrutiny regarding the use of MOI as a triage guideline, medical experts continue to support it as a screening tool in the decision to triage patients to a trauma center.

Recent reports indicate our geriatric population is under-triaged when they experience a traumatic injury. According to a study by Ferrera et al in 2000, 94% of the reported MOI in the geriatric population was due to falls, motor vehicle crashes and pedestrian related accidents (see Table 1).(1) It’s interesting to note that 55% of the hospitalizations for trauma were due to low-mechanism falls (LMFs).

Traditionally the geriatric patients with trauma have been triaged in a similar fashion and by the same guidelines as our adult population. However, several studies have revealed that these two populations have different survival rates from similar trauma.

It’s these falls, often perceived by the medical community as minor, that may contribute to the increased morbidity and mortality seen in the elderly trauma patient. Thus, the first critical intervention in the care of our elderly trauma patients is to not under-triage them. We must carefully consider their MOI.

Different Physiologic Response
So, why does our older population have poorer outcomes from seemingly minor trauma? In many geriatric patients, it’s because their physiologic capacity to compensate for the traumatic insult is significantly impaired.(3) This occurs as a result of normal aging processes further compounded by the effects of chronic illness.

Every system in the body is affected by aging, most important of which are the pulmonary and cardiovascular systems. The pulmonary system is impacted by decreases in functional capacity and lung elasticity as a person ages. This negatively impacts tidal volume, which is required for proper ventilation. Compound this with overlying chronic obstructive pulmonary disease (COPD) and the patient’s ability to compensate during stress can be severely impaired. Therefore, seemingly minor injuries, such as rib fractures, can cause significant respiratory compromise.

Also, the cardiovascular system, which is important to maintain tissue perfusion, particularly in a shock state, is drastically affected by aging. Inelasticity of the arteries, poorly functioning heart valves, decreased cardiac function (cardiac output) and decreased sensitivity to the catecholamine response of fight or flight all impact the patient’s ability to mount a response to injury and shock. This can be further compounded by baseline coronary artery disease, previous myocardial infarction and congestive heart failure (CHF). It’s, therefore, critical that elderly patients with an underlying medical condition be closely monitored when suffering a traumatic injury.

The aging of other important body systems can also have an impact on elderly trauma patients: Cerebral atrophy causes shrinkage of the brain which creates tension on the cerebral veins and, in turn, can tear more easily and cause subdural hematomas. Decreased renal function can impact the patient’s ability to survive a protracted recovery period. And decreased immune system response can prevent the ability to fight infection.

Further, the elderly patient’s ability to physiologically compensate for the stress of trauma is not only reduced by the normal aging process and chronic disease but compromised by the medications typically taken by this population. Some key medications to be concerned about include the blood thinner Coumadin (warfarin) and the antiplatelet agents, such as aspirin and Plavix (clopidogrel), which can lead to significant bleeding complications.

Beta-blockers and calcium-channel blockers can reduce cardiac output when it may be needed most — during acute traumatic stress. And diuretics, such as Lasix (furosemide), can make these patients relatively volume depleted (dehydrated), which can then compromise their ability to mount a response to lowered blood pressure. All of these compounding factors set the geriatric patient up for a poor outcome from a traumatic insult, even a seemingly insignificant trauma.

Beyond the physiologic response problem in this population, there’s speculation that hospitals not structured to treat the geriatric trauma patient may actually contribute to the increased morbidity and mortality of this disease process. Fallon et al advocate the concept that a resource-based, multidisciplinary approach to these patients supports better outcomes.(4) This level of care can best be provided by an appropriately certified trauma center. Outcomes may be further improved with the addition of a geriatric trauma team as a consulting service.

Refined Geriatric Triage
The Trauma Committee of the State of Ohio, Office of EMS, performs periodic reviews of their statewide trauma registry. In 2007, a focused review of the geriatric trauma population unveiled a startling trend: Patients older than 72 years of age, regardless of the severity of their injuries, had increased mortality(5) When reviewing single and multiple body regions injured, the geriatric patients died at a higher rate than the non-elderly adult population — 3.9% to 2.6% and 8.42% to 6.25%, respectively.

Another concerning piece of information from this report was a subset analysis that indicated traumatized geriatric patients died at a significantly higher rate than the adult population (15.89% versus 1.99%) when they were admitted to a non-ICU setting in a non-trauma center hospital. In addition, the death rate of geriatric patients compared against adult patients at trauma centers was significantly different (81.51% to 91.19%). These two data sets seem to support the theory that all too often the geriatric population is under triaged to non-trauma centers.

As a result of this report, the State of Ohio Trauma Committee made the following recommendations regarding Geriatric Trauma Triage Guidelines:

The data also indicated that the geriatric patient suffering from TBI with a GCS < 15 had the same mortality rate as an adult with a GCS = 10. This data is helpful but has some limitations. The baseline GCS on many of our geriatric patients may not be 15. Utilizing the number without clinical correlation may actually lead to over-triage of these geriatric trauma patients.

So, the geriatric patient, with an obvious head injury, and a GCS less than 15, should be triaged to a trauma center. These criteria applies to patients who fell from a standing height. These falls have been traditionally viewed as a minor MOI, even in the geriatric population. But data has demonstrated differently.

We must also consider the occurrence of spinal cord injuries in this population. Because geriatric bone structure is much more brittle than in adults, a seemingly minor fall can more easily lead to spinal-column fractures and potentially spinal-cord injuries. Thus, we must elevate our index of suspicion regarding the trauma suffered in our geriatric patients from simple falls.

According to the Ohio report, the Ohio trauma registry is not specifically able to identify injury qualifiers. But one MOI was able to be analyzed. The report showed that geriatric patients struck by an automobile suffered more than double the mortality rate than the adult population — 16.63% to 7.45%, respectively. Because an auto-pedestrian accident can involve a high amount of force and the geriatric patient is susceptible to more severe injuries with less force, the report recommends following this guideline to appropriately triage these patients to a trauma center.

The report also provided data on the outcome of geriatric trauma patients that incur long-bone (humerus or femur) fractures from MVCs. The increased odds of mortality for the geriatric patient from this type of injury correlates with the decreased severity of MOI needed to cause fatal injuries in this group.

Evaluating Clinical Signs
The traditional clinical marker for shock has been a systolic blood pressure (SBP) less than 90 mmHg. As referenced earlier, elasticity of the vascular system decreases with age, resulting in a steadily trending higher baseline. Therefore, shock (often detected by decreased SBP) can be masked by a higher baseline SBP in the geriatric population.

We’ve all been trained to react to the objective numbers we acquire from the assessment of our patients, and the use of these numbers can be helpful. But the clinical picture must be evaluated as a whole. The current trend in the treatment of shock is to focus more attention on the clinical assessment of mental status. Therefore, your assessment of geriatric patients for shock should include not only a reference to objective numbers, but also to each patient’s mental status.

Co-Morbid Diseases
The Ohio trauma registry is limited in the data collected on co-morbid disease states in the trauma patient. Despite this limitation, there was a trend supporting increased mortality in the geriatric patient with co-morbid disease. Based on the data reported, the recommendation for triage of the geriatric trauma patient to a trauma center should be considered when the following co-morbid diseases are identified: diabetes, cardiac disease, COPD, clotting disorder (including warfarin use), immunosuppressive disorder or patients requiring renal dialysis.

Summary
It is time to reassess how we triage our geriatric trauma patients. We must maintain a high index of suspicion for serious injury in this population. States should review, validate and present geriatric trauma triage criteria to guide EMS providers in their decision about where to transport their eldest patients to give them the best chance of survival.

Donald A. Locasto, MD, is an assistant professor in the Department of Emergency Medicine, University of Cincinnati. He directs the EMS Division and EMS Fellowship at UC. He serves as medical director for the City of Cincinnati and the Colerain Township Fire Departments. He can be contacted at locastd@ucmail.uc.edu.