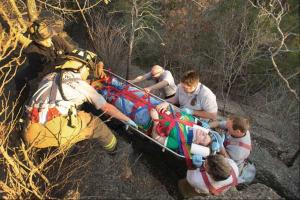 Fort Worth Fire Department respond to a report of a man who had fallen off a cliff around dusk in January. Initial reports indicated that a man had been walking his dog when he lost his footing and fell down the side of the a cliff in a wooded area. Six fire department units, including three with specialized technical rescue training and equipment, were dispatched to locate and rescue the patient. Firefighters found a 25-year-old male who had fallen off the cliff and landed on his back, sustaining neck and back injuries. They evaluated the patient’s condition, stabilized his injuries, started precautionary IV lines and carefully packaged him in a Stokes basket to transfer him safely up to level ground, where he was moved to an awaiting ALS ambulance for transport to a local specialty care facility. The patient, who was unaccompanied at the time of the accident, was able to reach his cell phone to call 9-1-1 for assistance.  If he had not been able to do so, his condition would have prevented him from receiving assistance overnight and subjected him to exposure complications in addition to the trauma he sustained in the fall.