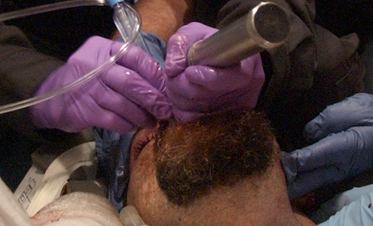 I have read your articles for some time and have always found them well thought out. I have been an EMT-B for the past four years and understand there has been an optional endotracheal tube module for the EMT-Bs for some time. Why isn’t it being taught and utilized in more places?

Thanks for the kind words. The optional endotracheal intubation (ETI) component has been in the EMT-B curriculum since 1994. Limited venues train and allow their EMT-Bs to perform intubation.

In 1994, the Department of Transportation’s National Highway Traffic Safety Administration presented a revised EMT-B curriculum. This curriculum outlined the objectives to be met in training EMT-Bs in the U.S. and included an optional module to teach EMT-Bs to perform ETI. The ETI training module wasn’t evaluated prior to its inclusion in the EMT-B curriculum; so it’s not known to what extent the curriculum effectively teaches EMT-Bs to perform ETI in either the classroom or real-world clinical practice environment. The effectiveness of training programs that teach this skill need to be further evaluated. It may also be necessary to assess the potential for differences in the correct performance of ETI among experienced EMT-Bs as compared to inexperienced EMT-Bs. We know little about the optimum level of experience that should be required among those trained to perform ETI.

Researchers have used different educational modalities to train EMT-Bs to perform ETI. Although some have used a combination of classroom education and manikin practice, others have used a combination of classroom and actual patient intubation. These models were evaluated for their efficacy, and the findings demonstrated problems with the quality of the skill performance and questioned the wisdom of including the skill in the curriculum.

Review of the Literature

Teaching EMT-Bs how to perform endotracheal intubation on manikins isn’t new. The purpose of one study was to determine if rural EMT-Bs with a lecture on ETI and manikin training could achieve prehospital intubation success rates comparable to paramedics. The study used 87 full-time EMT-B personnel from rural Indian services with no prior or current paramedic training who volunteered to participate. The students completed a nine-hour course on airway control that included didactic and manikin training adapted from the national standard paramedic curriculum. They were required to complete 10 simulated patient scenarios from scene arrival to securing the endotracheal tube and 20 timed practice intubations on manikins. Intubation practice on animals, cadavers or live humans wasn’t provided. Participants completed a written test and a manikin exam consisting of two patient scenarios. The investigators performed the initial training and testing. In-service instruction by the local EMS coordinator was integrated into quarterly, mega-code testing.

All successfully completed ETI training. Once they completed this class, they could perform ETI on apneic prehospital patients who were aged 16 years or older and didn’t have an active gag reflex or massive facial trauma.

The results showed 39 percent of the EMT-Bs attempted to intubate 57 eligible patients with a 49 percent success rate. (In contrast, the prehospital intubation success rates from three previous studies of manikin-trained paramedics ranged from 77 to 91 percent.) Complications included five inadvertent extubations, two endotracheal tube cuff ruptures, two prolonged intubation attempts and one mainstem bronchus intubation. There were no unrecognized esophageal intubations. Two of the seven EMS agencies did not report any intubation data.

It appears from this study that rural EMTs with didactic and airway manikin training failed to achieve prehospital intubation success rates comparable to those of paramedic controls. In other studies, paramedic success was twice that of the EMT-Bs in this study. Possible explanations include training deficiencies, poor skill transference from manikin to human intubation, infrequent intubation experiences and inconsistent supervision.

The participants’ years of experience were not discussed in this study and whether that may have changed results or the authors’ conclusions is unknown. In addition, they make no mention of the efficacy of the training program; the participants weren’t pre-tested to establish a baseline score of didactic ETI knowledge; and they weren’t post-tested on the same topic — throwing doubt on the effectiveness of the training. My project will attempt to measure the effectiveness of the training in both didactic knowledge and skills using both pre- and post-training assessments.

In another study using manikins, investigators tested the hypothesis that EMT-Bs would be able to discriminate reliably between intratracheal and esophageal tube placement in a manikin model. Subjects were EMT-Bs who volunteered to take part after a six-hour ETI training course.

An airway manikin with a closed chest cavity was intubated either through the esophagus or trachea, and the cuff was inflated. A stethoscope, bag ventilator and laryngoscope were available next to the manikin. Participants assessed placement by auscultation or direct visualization. A blinded investigator graded the students. At the outcome of the study, 33 subjects were tested. Seventeen of 18 (94 percent) tracheal intubations and 11 of 15 (73 percent) esophageal intubations were identified correctly. Only 72 percent of the students listened to the epigastrium, 81 percent listened to the lungs and 85 percent attempted ventilation. The 10 who visualized the cords discovered all five esophageal intubations. The 23 who didn’t visualize the cords missed four esophageal intubations and found six.

The authors surmise that EMT-Bs had difficulty assessing endotracheal tube placement in a manikin model. The 27-percent miss rate for identifying ETIs suggests that EMT-Bs require additional training for safe field use of any airway that requires assessment of tube placement. Again, very little is specified about the training program — other than the duration.

The 1998 study by Sayre and colleagues assessed the success and complication rates of ETI by EMT-Bs on patients in the field. This training module was similar to that of the group’s 1994 EMT-B curriculum and included at least 10 intubations on manikins. Patients were eligible for intubation if they were older than 15 years and not breathing. The authors calculated a 95-percent confidence interval (CI) for intubation success rates. Sixty-six participants passed and were authorized to perform intubation in the field. Participants attempted ETI in 103 patients; 53 attempts were successful. With the exception of six cases, paramedics intubated all patients who were not intubated by EMT-Bs. One attempt was made in 52 patients, two attempts in 44 and three in seven. Three unrecognized esophageal intubations occurred.

The authors concluded that EMT-Bs who participated in a short training course successfully intubated half the patients they encountered. This success rate calls into question the validity of the ETI-training module in the 1994 EMT-B national curriculum. Again this study didn’t test the effectiveness of the training program or the experience level of the participants.

In another study to measure the effectiveness of manikin practice when teamed with actual field experience, researchers on Martha’s Vineyard. Mass. secured a special-waiver project in which EMT-Bs were trained to perform ETIs in a rural community. The authors were able to obtain a commitment to teach from the surgeons and anesthesiologist in the local hospital. This allowed the EMT-Bs to be clinically trained on live adult patients in the operating room (OR) and didactically using a paramedic curriculum. All patients were in either cardiopulmonary or respiratory arrest. EMT-Bs performed 32 intubations. Thirty attempts were successful; two were unsuccessful. Unsuccessful tube placements were managed with accepted BLS airway standards. No esophageal tube placements were unrecognized. This study demonstrated that, with an intensive training program using selected highly motivated providers and close monitoring, a program of EMT-B tube placement in a rural setting can achieve acceptable success rates in patients in cardiac or respiratory arrest.

It’s no surprise that committed physician support and a sound training program with OR access achieves acceptable results. Nowadays, the trick is getting the support.