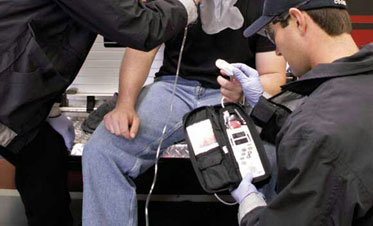 The Science
A Level 1 receiving hospital in Rhode Island implemented routine carbon monoxide monitoring using the Masimo Rad-57 during the cold weather months of December 2005 through February 2006. The Rad-57 is a non-invasive monitor similar to an oximeter using multiple wavelengths of light to detect carbon monoxide in the bloodstream.

Eleven cases of what the researchers described as “presenting signs and symptoms not consistent with CO toxicity were identified through SpCO screening.” The authors concluded, Screening for CO toxicity using a non-invasive pulse CO-oximeter can be conducted even in a busy tertiary center ED and identify patients with occult CO toxicity.”

The Street
Carbon monoxide toxicity is a silent killer, and while we all recognize its threat in the context of house fires, car exhaust and suicide attempts, little attention has been paid to its prevalence in the general population. This study is one of the first to attempt, on a large scale, to accumulate data to answer two important questions related to carbon monoxide.

First, what should be considered “normal” SpCO values in the asymptomatic patient? In the urban environment, we know industrial pollutants result in higher CO levels. This explains why even non-smokers in this study had levels of nearly 3%. Many texts say CO toxicity is 5% for non-smokers and 10% for smokers. But in this study, only one of the 11 cases of suspected CO poisonings had a level of 10% and she was an asymptomatic non-smoker whose husband presented with nausea and vomiting from suspected hip pain. The fire department found a dead animal in their chimney resulting in elevated CO levels in the home. Some of highest levels (33%) were found in psychiatric patients who more than likely smoked more than they admitted.

This led the authors to adjust what they termed “normal” — 8% for non-smokers and 12% for smokers — to avoid over-evaluation of false positives.

The second question to be considered is whether SpCO be a mandatory vital sign for all patients. Clearly, there were unrecognized CO poisonings. Four patients were subsequently sent for hyperbaric oxygen treatment. These presented with headache, syncope and weakness. Despite the authors stating these cases didn’t present with signs and symptoms of CO poisoning, these presentations are consistent with CO toxicity.

So what are the implications for EMS? The SpCO levels were lower for patients arriving by EMS. The study did not state that none of the significant cases were found in the EMS population, but this was implied. It’s suspected the higher levels of CO in the ambulatory patients is a result of their having just smoked prior to arrival at the ED.

From a public safety perspective, the finding of one unrecognized case in 10,000 contacts could identify approximately 11,000 cases a year based on ED census data. I would support the use of CO monitoring, and more vendors are incorporating CO monitoring into their devices based on this data.