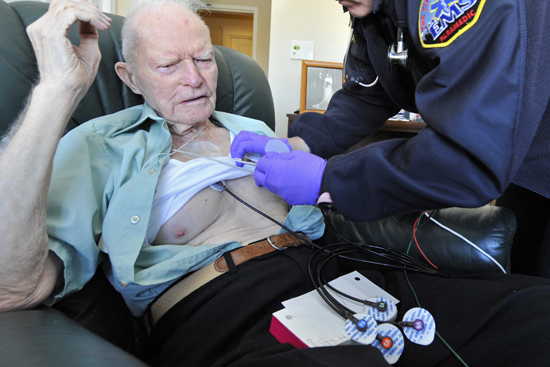 Of 251 patients, mean and median Î”LKN were 28 and 0 minutes, respectively. Î”LKN was < 15 minutes in 91% of the entire group and < 15 minutes in 80% of patients with a diagnosis of stroke. Of patients who received IV tPA, none would’ve been incorrectly excluded from IV tPA if the EMS LKN time had been used. Conversely, of patients who didn’t receive IV tPA, 6% would have been incorrectly included for IV tPA consideration had the EMS time been used. In patients with wake-up stroke symptoms, EMS underestimated LKN times by an average of 208 minutes. All of the potentially incorrectly included patients would’ve been wake-up strokes.

They concluded that EMS times could be used to determine candidacy for IV tPA in all cases of suspected stroke except for wake-up strokes.

Doc Keith Wesley comments
It’s been well documented that the sooner IV tPA is administered to stroke victims, the better their outcome will be. Early identification and hospital notification (such as stroke code alert) by EMS has been shown to decrease the time of onset to treatment.

Critical to this process is the reliability of the time of stroke symptom onset. This information is often gathered from witnesses such as family and friends. In this study, the authors found that older patients were less likely to have reliable LKN times perhaps due to living alone and/or being unable to speak after stroke aphasia. Witnesses rarely ride to the hospital with the patient, and therefore, physicians must rely on the accuracy of the EMS LKN time.

The fact that these researchers discovered such a high reliability is most likely due to increased education of EMS providers through the efforts of this hospital’s stroke program and those championed by the American Heart Association.

Whether or not to treat wake-up strokes is somewhat controversial. Some systems consider the time the patient awoke to be the LKN time while others, this EMS system for example, requires a firm time of LKN prior to sleeping. In this study, EMS considered LKN time to be the time of awakening.

The bottom line is that EMS and the receiving hospital must be on the same page in terms of time. Some centers have a 4.5-hour window while others extend it to six or even seven hours depending on the size and location of the stroke. Make sure your protocols are up to date and your receiving centers are involved in their creation.

Together, we can make a very big difference in this serious disease.

Medic Karen Wesley Comments
The Navy Seals have a saying: “There are two ways to do something: right and again.” But with stroke, once the time for intervention has passed, there’s no going back to do it again, so it’s imperative we do it right.

This study is unique in its training and education of the prehospital personnel by stroke specialists. Imagine if EMS providers across the country were given this same training, using the physician instructors–the outcome would be incredible.

Everyone deserves incredible. As educators, it’s clear we need to include physicians in the training of our crews. We’re the same warriors in the same boat, fighting death and disability due to stroke. Let’s team up with doctors to positively impact our patients. I encourage others to use this study to entice physicians to take a role in our education.