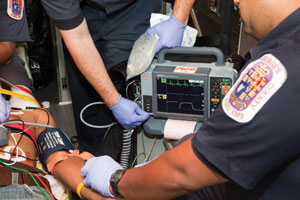 Congestive heart failure (CHF) is the most common underlying condition that results in 9-1-1 calls for shortness of breath. It’s a significant medical condition that EMS sees frequently, with new onset and acute exacerbation of chronic CHF results in more than 300,000 hospital admissions yearly. In fact, 50% of CHF patients will be readmitted to the hospital within six months of their last hospitalization–20% within one month. And the overall mortality from CHF is 8%.1

The reasons for this high recurrence of CHF are multi-factorial (see Figure 1). Regardless of the cause, having a proper appreciation for this syndrome, understanding its pathophysiology and aggressively treating it in both the hospital and prehospital arena has been shown to significantly reduce this high mortality rate.

Pathophysiology
CHF is a syndrome defined by a constellation of specific signs and symptoms relating to any mechanism that impairs the efficiency of the heart to eject blood. Traditional teachings regarding CHF have focused on total body volume, incorrectly believing that the patient suffering from CHF must be volume overloaded and that simple diuresis was the key to therapy.

We now recognize that CHF results in cardiovascular compromise when, for whatever reason, the heart’s cardiac output is diminished. This can occur if the heart develops a dysrhythmia, such as atrial fibrillation, that reduces the amount of blood ejected with each compression (i.e., stroke volume) by as much as 25%.2

It can occur following a myocardial infarction when the myocardium’s ability to contract is impaired because of a loss of the infarcted muscle mass. CHF most often occurs due to chronic hypertension where the myocardium must increase in size (hypertrophy) to have sufficient force to eject blood out of the ventricle against the significantly elevated arterial pressure. This hypertrophy impairs stroke volume by decreasing the size of the ventricle. Also, the hypertrophy muscle doesn’t relax normally, and this further decreases stroke volume by not allowing the ventricle to fill normally during diastole.

The human body responds to this insult on the heart’s function by engaging several autonomic compensatory reflexes (see Figure 2). Key to this reflexive response is the kidney, which is highly responsive to changes in blood volume and views the decreased cardiac output as a sign of hypovolemia. In response, the kidney releases the hormones renin, aldosterone and angiotensin.
Renin and aldosterone increase sodium absorption in the urine to boost circulating blood volume, while angiotensin increases peripheral vascular resistance. Increased peripheral vascular resistance occurs through vasoconstriction of the arteries and veins.

In EMS, we refer to increased arterial resistance as “afterload,” because it’s the pressure against which the heart must work “after” it leaves the heart. Venous vasoconstriction increases the volume of blood that’s returned to the right side of the heart and is referred to as “preload” because it loads the heart with blood “before” ventricular contraction.

Although this cycle of dysfunction is occurring, the ability of the left ventricle to pump the blood it’s receiving from the right ventricle is impaired, and the pressure in the pulmonary veins increases, causing fluid to move from the pulmonary capillaries into the tissue surrounding the alveoli, the interstitial space. This fluid impairs the ability of the lung to exchange carbon dioxide and oxygen.
If the pressure continues to rise, the interstitial fluid can move into the alveoli completely, blocking their ability to function. This is the process that causes the patient to become short of breath. The body responds to this pulmonary insult by releasing adrenalin to increase both the heart rate and respiratory rate. The patient must expend more and more energy to breathe, which is referred to as work of breathing (WOB). If the WOB becomes too great, then the patient begins to hypoventilate, and eventually, stops breathing altogether.

The problem with this compensatory reflex is that unless the heart can handle the increased workload and the pulmonary edema can be tolerated, the body continues to pump more adrenalin, angiotensin and aldosterone into the system. This requires the heart to work harder, leading to myocardial ischemia, decreased myocardial contraction and lowered cardiac output, which only perpetuates the cycle of reflexive response, pulmonary congestion and decreased cardiac output. This process continues until the patient quits breathing or experiences cardiogenic shock (see Figure 3).

Treatment Approach for CHF
With our new understanding of the pathophysiology of CHF, the goal of therapy is two-fold: 1) interrupt the cycle of autonomic reflexes and 2) decrease the work of breathing.

The most powerful therapy of interrupting the autonomic cycle is to reduce the preload and afterload with the administration of nitroglycerin. This can be accomplished by sublingual administration of one spray or tablet every five minutes, which equates to 80 micrograms/minute. IV nitroglycerin is more efficient and more easily titrated to effect.

Reducing the work of breathing is also accomplished with ventilatory support with continuous positive airway pressure (CPAP). CPAP increases the pressure in the alveoli, promoting the movement of the interstitial fluid back into the blood stream. Reduction in pulmonary edema reduces elevation in adrenalin and further decreases the work of breathing.

Traditional therapy for CHF used to consist of high doses of diuretics, such as furosemide. However, recent studies have shown that CHF patients are rarely in volume overload.3 Instead, they suffer from inappropriate volume distribution. That is, there’s an increased amount of fluid in the interstitial spaces in the lung and peripheral tissues; not an overall circulating volume. Therefore, the role of diuretics has become secondary and reserved only after the cycle of autonomic reflexes has been interrupted.
Until the myocardial workload is reduced with nitroglycerin and the pulmonary edema relieved with CPAP, any excess fluid can only be dealt with after it’s back in the circulatory system. In fact, several studies indicate that early, high-dose furosemide therapy causes the kidneys to misinterpret the diuresis as further dehydration and results in the release of anti-diuretic hormone (ADH), which promotes water reabsorption and the occurrence of a second episode of CHF (rebound) after the patient is admitted.4

CHF Complications
As can be predicted from understanding the pathophysiology of CHF, the two most significant complications include respiratory failure as a result of the energy required to breathe and cardiogenic shock once the heart is no longer able to compensate for the increased myocardial workload.
Respiratory failure from CHF is similar to any other cause that increases the work of breathing beyond the body’s ability to compensate. Elevated adrenalin levels precipitate the rise in respiratory rate and volume. However, the supply of adrenalin is limited, and once it’s depleted, the respiratory rate begins to drop.

Movement of carbon dioxide (CO2) is affected first because its elimination from the lungs is totally dependent on the rate and depth of ventilations. As the ventilatory rate and depth decrease, CO2 levels increase. Elevated CO2 levels have a narcotic-like effect on the brain, causing a decreased level of consciousness that further reduces ventilatory drive, resulting finally in coma and respiratory arrest.

The ability of the heart to compensate for the elevated adrenergic tone and autonomic reflex hormones is finite. Left uncorrected, the strain on the heart becomes too great and the cardiac output plummets, resulting in shock. Because this shock state is a primary result of heart failure, it’s termed cardiogenic shock. The patient’s blood pressure drops, resulting in systemic hypoperfusion, which eventually leads to cardiac arrest.

Capnography & CHF
Capnography has traditionally been viewed as a means to monitor the ventilatory status of a patient. Although this is true, it isn’t the only process that capnography monitors. For CO2 to be released from the pulmonary vasculature, it must be delivered to the lungs by the circulatory system. To accomplish this, the cardiac output must be sufficient to perfuse the lungs. Therefore, when interpreting capnography in the CHF patient, EMS providers must evaluate the status of both the ventilatory and circulatory system.

Ventilatory status: The capnography of a patient with an increased WOB will reveal low, normal or elevated CO2 levels. Low CO2 levels (hypocapnea) indicates hyperventilation; elevated CO2 levels (hypercapnea) indicate hypoventilation. Normal values may mean the patient is breathing normally, but those values could also indicate that the patient is transitioning from hypo to hypercapnia or vice versa. This is why continuous capnography is vital to determine whether the patient’s condition is changing.

Circulatory status: As long as the patient’s blood pressure is normal or elevated, as it most often is during a CHF exacerbation, the level of CO2 being delivered to the lungs will be consistent with adequate tissue perfusion. Therefore, in the absence of any ventilatory compromise, the CO2 levels will be normal or slightly elevated, which can indicate a higher than normal level of metabolic activity (myocardial workload).

If cardiogenic shock occurs, the perfusion to the lung is compromised, and the amount of CO2 delivered is significantly reduced. In the absence of ventilatory compromise, the CO2 level is a valuable indicator of cardiac output and tissue perfusion.

Capnography & CPAP
As discussed earlier, CPAP is a vital component in the treatment of respiratory distress in CHF. The questions are, how is capnography performed with CPAP, and does CPAP affect the accuracy of capnography?

HealthEast Medical Transportation in St. Paul, Minn., conducted a study to determine the most accurate and reliable means of performing capnography while administering CPAP. It examined the three most common devices at the time: Port-O-Vent, Respironics Whisperflow and Boussignac. The package insert for all three devices indicates that capnography could be accomplished by attaching a CO2 sampling line at various points in the CPAP circuit: the exhalation port, a nipple in the T-piece and a nipple on the mask.

This was compared with capnography obtained from the Oridion Capnoline, which is a combined nasal/oral sampling cannula worn under the CPAP mask (see Figure 4).

Conclusion
CHF is a common cause of respiratory distress in EMS patients. New theories of its pathophysiology indicate that aggressive therapy with nitrates and CPAP significantly reduces its mortality.

Capnography is one of the most sensitive vital signs that should be monitored while treating the CHF patient. Changes in CO2 level indicate the quality of ventilation and the perfusion status of the patient.

Keith Wesley, MD, FACEP, is the Minnesota State EMS medical director and the EMS medical director for HealthEast Ambulance in St. Paul, Minn. and can be reached at drwesley@emsconsulting.net.
Disclosure: The author has reported receiving no honoraria and/or research support, either directly or indirectly, from the sponsor of this supplement.