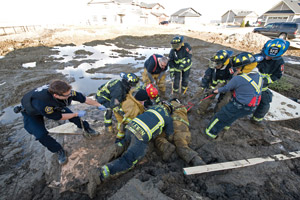 EMS providers and firefighters in Strathmore, Alberta, Canada work to extricate a 16-year-old boy who was entrapped in mud. The boy decided to walk across an area of new construction where the ground was muddy from melting snow and recent rain, and he sank in the mud to his mid thighs. He tried to self-extricate for 30 minutes but was unable to do so. His mother found him and dialed 9-1-1. Strathmore Town Fire Department firefighters and EMS providers responded. On arrival, they found the teenager’s left leg was not only trapped by the suction of the mud, but also wedged between scrap lumber under the mud. The young victim was freed after 45 minutes, suffering from mild hypothermia but no other apparent injuries. He was taken to an awaiting ambulance, stripped out of his wet clothes, covered in blankets and passively rewarmed with the dry blankets and heated air in the ambulance. At the request of the family, the patient was treated and released at the scene.

This article originally appeared in August 2011 JEMS as “Muddy Rescue.”