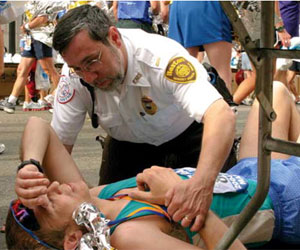 The patient’s wife called 9-1-1 because her husband was acting drunk. When you arrive on scene, a middle-aged woman meets you at the door and tells you she’s concerned about her husband. She came home from a weekend business trip and found her husband “not acting right.” You ask for clarification, and she tells you he is confused and is having difficulty walking. She doesn’t think he’s drunk because he has only had one beer but says, “He is sure acting weird.”

After assuring the wife you will take care of her husband, you and your partner walk into the living room where he is sitting. You find a 46-year-old male sitting on the couch. He looks at you as you walk in the room. He nods his head when you say “hello” but he does not speak. A quick physical exam reveals no signs of trauma. He appears to be moving all extremities but is unable to follow commands when you attempt to perform a Cincinnati Stroke assessment.

You note no facial droop or dropping of the eyelid, which is called ptosis. The patient’s skin is pink, warm and dry, and his pupils are equal and reactive at 4 mm. He doesn’t appear to be in pain or respiratory distress. His pulse is 72 and regular. Blood pressure is 146/82 and respirations are 18 and uncompromised. A finger-stick blood glucose level (BGL) reads 106 mg/dL. There’s a can of beer sitting next to him, but it’s nearly full. The patient’s wife tells you she her husband seemed normal when she spoke with him this past evening. She says he told her he was tired and was going to bed early. She tells you her husband is healthy and takes no medications on a regular basis. A little bewildered, you and your partner place the patient on the stretcher and into the ambulance.

During transport, you establish an IV and begin a reassessment when the patient develops a tonic-clonic seizure. The seizure last about 45 seconds and stops. The patient now responds only to noxious stimuli with moaning and withdrawal. You suction his airway, apply oxygen and ask you partner to step it up to an emergent transport.

An Unusual Finding
As you transfer the patient to the emergency department, you ask the emergency physician what she thinks is the cause. She tells you she needs to wait for lab work. When you follow up later in the shift, the she tells you the patient’s sodium level was 118 mEq/L. The patient was hyponatremic because he has a tumor on his posterior pituitary gland that’s causing an increased production of antidiuretic hormone (ADH), which is resulting in a dilution of his sodium levels. This is called syndrome of inappropriate anti-diuretic hormone (SIADH), which has many underlying causes in addition to hyponatremia.

The brain tumor that caused hyponatremia in this case may not be commonplace, but hyponatremia is one of the most common electrolyte imbalances seen in the field.(1)

Sodium is the primary extracellular ion. Normal values are 135–145 mEq/dL. Hyponatremia is defined as sodium levels less than 135 mEq/dL, with levels less than 125 mEq/dL being considered severe.(2) When sodium levels drop, there’s a change in osmolarity that causes fluid to move into cells. This causes cellular swelling, which is most concerning in the brain and is the cause of many of the symptoms. If hyponatremia develops slowly, the body may have the ability to compensate and patients may be asymptomatic even with sodium levels as low as 115 mEq/dL.(1) However, patients with acute hyponatremia can be critical.

Sodium concentration can be depleted in a couple of ways. In hypovolemic hyponatremia, a body has lost too much sodium in relation to water loss. This can occur with excessive sweating as seen with endurance sports like marathons, use of such diuretics as thiazide diuretics, and third spacing of fluid, as is seen with burns.

The other way is to dilute the body’s sodium concentration with too much water. Dilution of sodium can occur with excessive fluid intake or secondary to the body’s ability to eliminate fluid, which is the case with heart failure and renal failure. There have also been cases of hyponatremia seen in infants when their formula has been diluted with water or the child has been fed tap water.(3) This is referred to as hypervolemic hyponatremia.

In the case discussed here, the patient developed hyponatremia secondary to the body’s inability to eliminate fluid because of the alteration in ADH levels. Common signs and symptoms of hyponatremia include lethargy, apathy, confusion, disorientation and seizures. Other non-specific symptoms include muscle cramps, nausea and weakness.(4)

Conclusion
Identification of hyponatremia in the prehospital setting may be difficult. A thorough history is a good start, and agencies using bedside lab devices, such as i-STAT, will be able to obtain a sodium value. However, treatment should be based on the underlying cause, type of hyponatremia and whether the onset was acute of chronic. EMS providers should keep hyponatremia in mind as a possible cause of patient’s symptoms rather than attempting to fix the patient’s electrolyte imbalance.