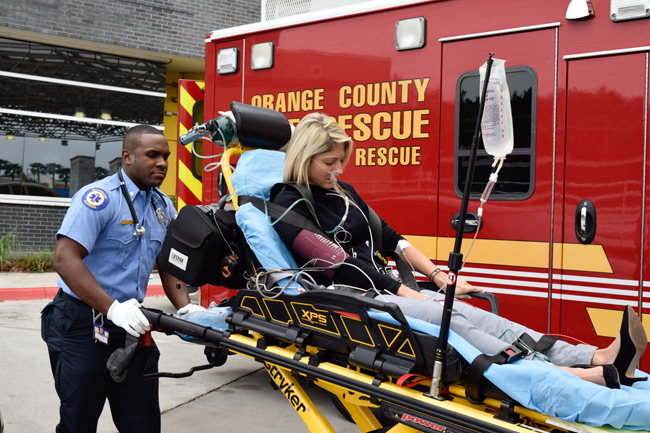 Severe sepsis caused by overwhelming infection is responsible for significant morbidity and mortality among hospitalized patients.1 Early identification and aggressive treatment, particularly in regard to fluid resuscitation and antibiotics, has been shown to improve survival.2

The Surviving Sepsis Campaign has created guidelines for best practices, and federal reimbursement for sepsis care has been tied to resuscitation “bundles” encouraging such guidelines are followed.

Clinical identification of sepsis commonly includes two or more of the systemic inflammatory response syndrome (SIRS) criteria in the presence of a suspected infection.1 A hallmark of severe sepsis is hypoperfusion leading to end-organ damage and cardiovascular collapse (i.e., septic shock).

Objective measures for hypoperfusion allow for risk stratification along the continuum of the disease process. Elevated serum lactate levels (> 4 mmol/L) have traditionally been used as a sign of tissue hypoperfusion and an outcome predictor for septic patients.1,2

This has led to the development of screening tools and alert systems that may improve adherence to treatment guidelines.

An analysis of sepsis incidence and outcomes in prehospital emergency care demonstrated that septic patients are commonly transported by EMS and have a high mortality rate.3

Several studies have shown that a large percentage of septic patients arrive at the ED by ambulance, including those that require critical care.3,4 Characteristics of septic patients transported by EMS included elevated heart and respiratory rates.4

A study has shown that the time to antibiotics was decreased when sepsis was identified by prehospital providers directly in the narrative of their patient care report.5

Another study showed that prehospital placement of an IV catheter and administration of IV fluids decreased mortality in patients with severe sepsis.6

Severe sepsis has a high mortality rate that may be lowered by early identification and specific treatment. This suggests that prehospital processes including pre-arrival notification and immediate therapy similar to those used for ST elevation myocardial infarction and stroke may influence outcomes.

Prehospital screening tools for severe sepsis have been developed to improve awareness.7,8

Most of these screening tools have relied on the suspicion of infection, â‰¥ 2 SIRS criteria and point-of-care serum lactate levels.

The detection equipment is standard for many EMS units. EtCO2 can be measured immediately and noninvasively, making it a simple, clinically useful tool for prehospital providers.

Poor tissue perfusion also decreases the amount of blood flow to the alveoli of the lungs, reducing the amount of CO2 that can be exhaled. This is demonstrated most dramatically during extremely low-flow states and cardiac arrest.

More recently, we described that abnormal prehospital EtCO2 levels were associated with mortality and metabolic acidosis across a wide cohort of patients.17

In this study, all patients had EtCO2 recorded by EMS along with the initial vital signs, and hospital outcomes such as their primary diagnoses were then linked.

Information from these studies suggested that an EtCO2 measurement of â‰¤ 25 mmHg is strongly correlated with lactate levels > 4 mmol/L in the setting of suspected sepsis, and therefore may be useful as an objective measure for tissue hypoperfusion. 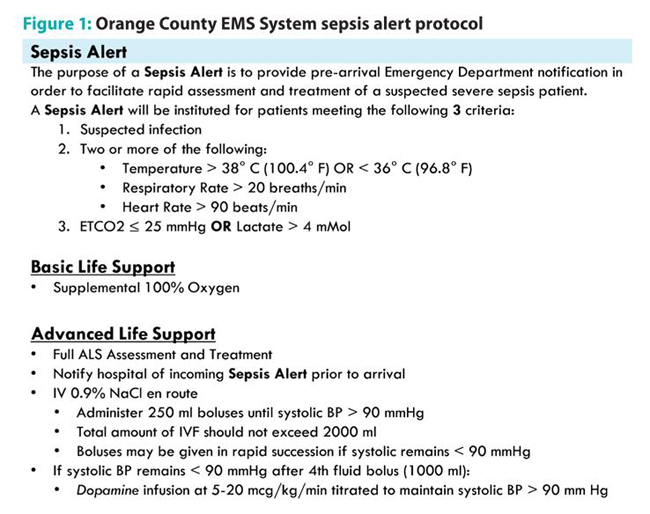 After a successful pilot study performed in the ED, the Orange County, Fla., EMS system developed a sepsis alert protocol utilizing low EtCO2 as an equivalent to elevated serum lactate for identification of hypoperfusion. (See Figure 1, above.)

This has allowed our EMS agencies discretion to utilize their existing equipment to perform fast, noninvasive screening for severe sepsis rather than purchase approved lactate monitors.

Prior to this protocol release, we had provided minimal mandatory education on the identification or treatment of sepsis, and had no distinct mechanism in place to alert the receiving hospitals of a potentially septic patient.

The current protocol and its subsequent training materials provide pre-arrival notification and the initiation of fluid resuscitation.

The algorithm focused on suspecting infection–especially in the case of altered mental status, immunocompromised, and elderly patients–then looking for SIRS criteria and evidence of hypoperfusion. (See Figure 2, below.)

One of our biggest challenges was to educate providers to maintain a high index of suspicion even in non-febrile patients. Another was to ensure understanding that evidence for hypoperfusion was the true discriminating factor between a patient who might be ill and one who was seriously ill.

We frequently used cases of patients with nonthreatening viral illnesses who had â‰¥ 2 SIRS criteria to show the value of this discrimination. For example, a patient with an upper respiratory illness, a fever and tachycardia, but who had an EtCO2 of 35 mmHg, does not meet sepsis alert criteria, and may just have a cold or flu. However, that same patient with an EtCO2 of 21 mmHg meets sepsis alert criteria (the â‰¤ 25 mmHg threshold in our protocol), and may have severe pneumonia or sepsis.

Further information was supplied to our personnel on the high morbidity and mortality of sepsis and the important role EMS may play in detection. Training was accomplished through multiple mediums including a brief, mandated online course, case reviews with individual crews, lectures at local conferences, and continuous quality review of sepsis alert activations.

We also worked in tandem with our receiving hospitals to ensure that a sepsis alert notification would initiate a tangible response at the ED.

The Orange County sepsis protocol development has been a team approach including both prehospital and hospital partners. Prior to protocol implementation, representatives from area hospitals and local emergency physicians were consulted. 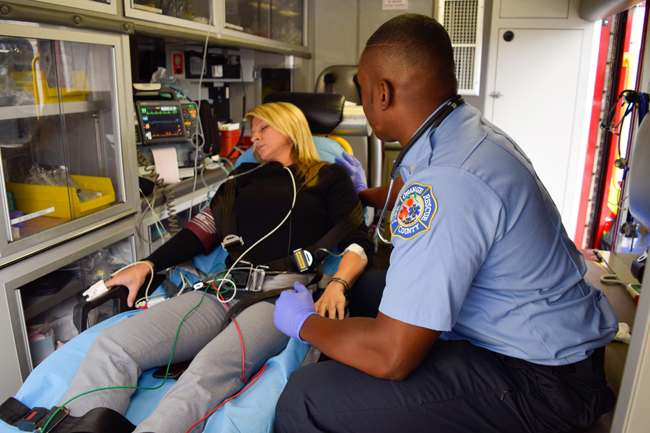 Pilot data was shared, and the sepsis alert protocol was disseminated so the receiving facilities and emergency physicians would understand what was meant by a sepsis alert notification.

These responses vary, but generally provide for immediate offload and patient evaluation in the ED to expedite resuscitation, drawing of blood cultures and the administration of antibiotics.

After protocol rollout, data on the sepsis alert activations was shared with the hospitals at our monthly quality council meetings. 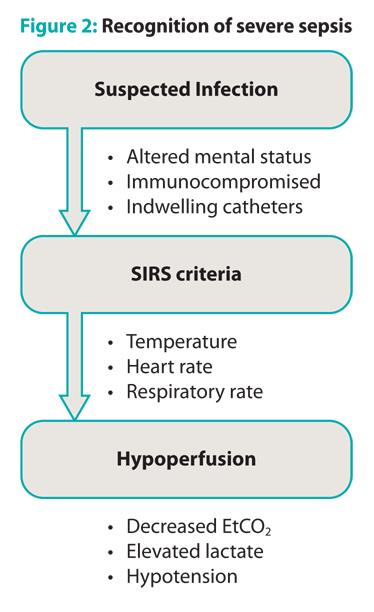 Prospective evaluation of the screening tool took place for the first year after deployment to determine whether we were identifying the appropriate patients. This was conducted as a prospective cohort study among the patients transported by agencies in the Orange County EMS System to our regional hospitals.18

Inclusion criteria consisted of any case where a sepsis alert was activated by prehospital personnel. Despite the training provided, variation in protocol compliance existed and was the basis for our comparison groups.

Our “protocol compliant” group was formed by sepsis alerts activated after EMS personnel had followed all diagnostic criteria of the protocol. In 100% of these patients, EMS personnel suspected infection, patients had â‰¥ 2 SIRS criteria, and initial EtCO2 values were â‰¤ 25 mmHg. This was strictly a protocol-driven process–EMS personnel activated sepsis alert notifications based on their determination that patients met all criteria.

Our “protocol noncompliant” group was made of patients whereby EMS personnel activated a sepsis alert but did not follow all diagnostic criteria of the protocol.

In the protocol noncompliant group, EMS personnel suspected infection in all patients, but they either didn’t have â‰¥ 2 SIRS criteria (5% of the cases), or EtCO2 values were > 25 mmHg (95% of the cases). This was a paramedic discretionary process, where sepsis alert notifications were activated despite the fact that not all protocol criteria were met.

The primary outcome was diagnosis of sepsis and severe sepsis upon hospital admission. We also measured mortality, patient disposition described as discharge, hospital admission or ICU admission, ICD-9 codes, and the relationship between EtCO2 and bicarbonate (HCO3), anion gap and lactate levels.

To better establish the effectiveness of the sepsis alert protocol, comparisons were performed between the protocol compliant and protocol noncompliant groups. For those sepsis alerts that followed the protocol, the sensitivity for predicting sepsis was 69% (95% CI 62—75%), the specificity was 67% (95% CI 57—75%), the positive predictive value was 78% (95% CI 70—84%) and the negative predictive value was 99% (95% CI 92—100%).18

This study demonstrates that it’s feasible for prehospital providers to utilize a sepsis screening tool that incorporates EtCO2 as an objective measure for hypoperfusion, and that it’s highly sensitive for predicting severe sepsis.

Appropriate use of the protocol identified patients who were more likely to be diagnosed with sepsis or severe sepsis, required ICU admission, and had a higher mortality rate. Additionally, decreased prehospital EtCO2 levels correlated with metabolic acidosis and increased in-hospital lactate levels across all patients.

The most common cause for noncompliance with the protocol was the criteria for EtCO2 (139, or 95%, of the group met all criteria except for EtCO2 â‰¤ 25 mmHg). In fact, the average EtCO2 was significantly higher in the protocol noncompliant group.

Interestingly, low EtCO2 correlated with elevated lactate levels and predicted sepsis, severe sepsis, and mortality across all patients, suggesting that it serves as an objective measure for hypoperfusion.

This may explain why sepsis alerts that followed the protocol were significantly more likely to be diagnosed with severe sepsis than those in the protocol noncompliant group (47% vs. 7%)–objective evidence for hypoperfusion discriminated between them.

It was important for us to develop a sensitive screening tool that could also avoid so-called “alert fatigue” in the EDs. The discrimination between potentially septic patients and those with severe sepsis is one way to achieve this.

There are several limitations to this study. The comparison groups were due to poor adherence to the initial criteria for sepsis alerts. However, it’s not atypical for large EMS systems to have lag time with new protocol compliance, and performance improved over the course of the study.

Another limitation to this study is that patients enrolled were all sepsis alert activations, and we’re unaware how many potentially septic patients weren’t recognized by providers.

Ideally, all patients diagnosed with severe sepsis in the hospital would be linked back to EMS transport to determine the actual incidence of appropriate protocol usage.

That nearly half of the protocol noncompliant group was still diagnosed with sepsis is also telling about the discretion of our providers. However, the screening process of the protocol was meant to narrow this group down to those with severe sepsis who require immediate action on behalf of the receiving hospitals. Utilizing EtCO2 levels of â‰¤ 25 mmHg as an objective measure of hypoperfusion provided that discrimination.

This study adds to the growing evidence that EtCO2 can be used as a surrogate marker of hypoperfusion and metabolic disturbances in the prehospital environment. Of note, the screening portion of this sepsis alert protocol is entirely noninvasive, suggesting that with proper training it may also be applicable for non-ALS providers, possibly as part the decision-making process for requesting ALS transport.

Further studies are necessary to evaluate if this protocol reduces hospital mortality, and whether any improvement in care is due to pre-arrival notification, specific interventions, or both. Also of interest is the trending of EtCO2 during resuscitation, and how it may relate to lactate clearance as a prognostic indicator.

11. Kheng CP, Rahman NH. The use of end-tidal carbon dioxide monitoring in patients with hypotension in the emergency department. Int J Emerg Med. 2012;5(1):31.