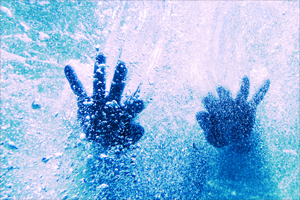 >> Identify the difference between the terms “drowning,” “immersion” and “submersion.
>> Learn the pathophysiology involved for drowning victims.
>> List methods of preventing drowning incidents.

Key Terms
Atelectasis: Collapse of the alveoli, which prevents the exchange of carbon dioxide and oxygen by the blood.
Laryngospasm: A sudden, temporary closure of the larynx.
Pneumocyte: Specialized cells in the alveoli in the lungs.

Drowning is defined as the process of experiencing primary respiratory impairment from submersion/immersion in a liquid medium. Drowning is the 10th leading cause of unintentional injury death for people of all ages in the U.S., but it disproportionally affects children. It’s the most common cause of deaths by unintentional injury for 1—4 years olds and the second most common cause of unintentional injury deaths for 5—9 year olds.1 Worldwide, the problem is much worse, with nearly 1% of all deaths occurring from drowning.2 Drowning remains a significant public health problem and something most EMS providers will encounter at some point in their career.

History
Humans have always been both intrigued by and fearful of drowning. The fresh drowning victim was an enigma: They looked relatively well but were dead. In some instances, a drowning victim would survive despite apparent death. Because of this, strategies were devised in the 17th century to try and resuscitate victims of drowning. In that era, the strategy was to expel water from the body by various methods, such as hanging the victim upside down or shaking them. One practice was to place the victim in a barrel, open the barrel on both ends and whirl it around to stimulate the vital organs.

In Paris, in the late 17th century, a rescue model for drowning victims was developed and used. Ultimately, this desire to save drowning victims became the model for subsequent first-aid care and education. In fact, some have argued that attempts to resuscitate drowning victims led to the establishment of EMS and emergency medicine as we know it today.3 Interestingly, the face on the famous Resusci Anne manikin, developed by à…smund S. Laerdal, was based on a death mask from an unidentified girl who drowned in Paris, in the River Seine, in the 1880s.4

Pathophysiology
At the most fundamental level, fatal drowning is death from asphyxia. However, the unique characteristics of the fluid in which the patient is submerged (e.g., temperature, cleanliness and ease of access for rescuers) contribute to the amount of time that the patient is hypoxic, and have a bearing on subsequent outcome. The pathophysiology of drowning is now better understood.

The process of drowning begins when the victim’s airway is submerged below the surface of the water. While above the water, a child will typically struggle for only 20 seconds before they become submerged. In contrast, an adult will struggle for approximately 60 seconds before they become submerged. The drowning process begins when the patient’s airway is below the water. Initially, there’s breath holding, and a small amount of water (typically less than 30 mL or 2 tablespoons) may enter the lungs if the patient gasps. During the struggle and the early part of unconsciousness, there’s reflex swallowing as the body attempts to clear the oropharynx of water. Even if water enters the lungs during this period, it’s typically only a small amount (2—4 mL/kg).

It was previously believed that as many as 30% of drowning patients had some degree of laryngospasm, but we now understand this to be much lower (7—10%). In reality, there’s probably no such thing as a “dry drowning.”6 Ultimately, as the victim’s oxygen levels fall and carbon dioxide levels rise, the brainstem will stimulate involuntary breathing, and then water enters the lungs.

Unconsciousness typically occurs within four to six minutes of submersion. In the past, a patient who asphyxiated from laryngospasm or didn’t involuntarily gasp prior to asphyxiation was termed a “dry drowning.” The more typical course described above was called a “wet drowning.” As discussed later, these terms have little use and are no longer recommended in the medical discussion of drowning.
The water that enters the lungs, regardless of the type, can wash away surfactant, leading to atelectasis (collapse of the alveoli). Aspirated water is also directly toxic to the pneumocytes (cells that make up the alveoli), thus causing bronchoconstriction, inflammation and hypoxic vasoconstriction. In the past, it was common to differentiate drowning types based on the type of water involved (e.g., salt, chlorine or fresh water). However, this was based on K9 studies for which the dogs had as much as 22 mL/kg of water instilled into their lungs, resulting in electrolyte and other abnormalities. The amount that actually enters the lungs in human drowning is significantly less than this (2—4 mL/kg).7 Thus, all drowning patients are initially treated the same (with the rare exception of drowning in industrial chemicals or sewage).

Although there’s some injury to the lungs during the drowning process, the final common pathway of all morbidity and mortality is hypoxia with resultant anoxic brain injury. Despite the presence of non-sterile water, salt or chlorine, the lungs typically recover, and emergency treatment should therefore be directed at interrupting the drowning process by providing oxygenation and ventilation as quickly as possible.

Terminology Changes
Now that the pathophysiology of drowning is better understood, terminology related to drowning has been standardized. Archaic terms such as “near drowning,” “dry drowning,” “wet drowning,” “secondary drowning” and “passive drowning” have been abandoned.8 Accepted terms include the following:
Drowning: Drowning is the process of experiencing respiratory impairment from submersion/immersion in a liquid medium, thus preventing the victim from breathing air. The victim may live or die after this process, but whatever the outcome, they’ve involved in a drowning incident.
Immersion: Immersion means to be covered in water. Usually at least the face and airway are immersed for drowning to occur.
Submersion: Submersion means the entire body, including the airway, is under water.

Treatment
As in all conditions, the primary assessment is key to treatment. You should determine whether the airway is patent, whether respirations are present and whether there’s a pulse. All these physiological functions are interrelated. Simple mechanical techniques, such as a modified jaw-thrust, are usually adequate for opening the airway, which may be obstructed by foam or water. When assessing breathing, look for the presence of cough, the presence of foam from the mouth or nose and presence or absence of rales.

Assess circulation by presence or absence of a carotid or radial pulse. A study of more than 41,000 lifeguard rescues in Rio de Janeiro, serves as the most extensive guideline to date on the treatment of drowning patients.6 Minimally symptomatic patients with just a cough and no foam at the mouth or nose can usually be released at the scene with instructions to watch for any signs of respiratory difficulty during the next 24 hours. All patients with respiratory symptoms (e.g., dyspnea, foam or rales) require high-concentration oxygen and transport.

It’s important to understand the differences in treatment priorities in drowning when compared with standard emergency medical care. In the typical medical cardiac arrest, the patient has suffered a cardiovascular event (e.g., heart attack, stroke or arrhythmia). In contrast, the drowning victim has suffered a hypoxic event (similar to most pediatric cardiac arrests). Thus, the 2010 American Heart Association Guidelines for circulation, airway, breathing (CAB) should be modified for drowning victims. Granted, some drownings may be due to a cardiac event, but those cases are generally uncommon.9 Thus, it’s prudent to follow the airway, breathing and circulation (ABC) assessment model in drowning victims.

The best chance for the successful resuscitation of a drowning patient is to administer oxygen and ventilate as soon as possible. The first person to encounter the patient is often a bystander, first responder (e.g., lifeguard or law enforcement) or EMS provider. Those personnel should be able to provide immediate BLS. Lifeguards and water rescue-trained personnel can take this a step further and start rescue breathing and initiate resuscitation while in the water, all of which contribute to improved outcomes.10

One complicating factor in the treatment of a drowning patient is the presence of copious amounts of foam in the upper airway. It was previously thought that this fluid was coming from the lungs, but it’s now recognized that much of it comes from the stomach. Ancient and outdated drowning treatments were directed at “draining” the water from the lungs either through the Heimlich maneuver or inverting the patient. All attempts to suction or clear this foam from the airway only delay much-needed oxygenation and go against most dogma of airway management–the patient is dying from cerebral anoxia and not foam in the upper airways. Thus, prehospital providers should focus on oxygenating and ventilating the patient and not on aggressive suctioning. Of course, if cardiac arrest is present, CPR should be initiated and necessary ALS measures provided.

Water is almost always cooler than the patient, and nearly all drowning patients will have some degree of hypothermia–even in warm weather. Remember to warm all your patients, especially if they’re in full arrest. The phrase “they are not dead until they are warm and dead” comes from drowning resuscitation.

Special Considerations
There are several special considerations in the treatment of drowning victims.

Prevention
Research has shown the following groups have the highest risk for drowning:

Such barriers as pool fencing should be used to help prevent young children from gaining access to the pool area without caregivers’ awareness. There’s an 83% reduction in the risk of childhood drowning with a four-sided isolation pool fence, compared with three-sided, property-line fencing. Among children ages 1—4 years old, most drownings occur in residential swimming pools. Most young children who drowned in pools were last seen in the home, had been out of sight less than five minutes and were in the care of one or both parents at the time.

Proactive prevention strategies include the following:

Summary
The past 40—50 years of research and experience have given us improved knowledge of the pathophysiology and treatment of drowning injuries. Still, an all-too-common event, the morbidity and mortality of drowning can be mitigated by prevention, recognition and target treatment. Old terms, such as “near drowning” and “secondary drowning,” are confusing and misleading, and use of these terms should be abandoned.21

Most importantly, EMS personnel should understand that drowning is a hypoxic event resulting from submersion in a liquid. Most BLS and ALS strategies are designed to treat cardiac causes of respiratory and cardiac arrests (with recent change to a CAB algorithm). Drowning, however, is initially a purely hypoxic event and should be treated as such with ventilation and oxygenation (with an ABC algorithm). EMS and the fire service, because of their presence in the community, are uniquely positioned to play a major role in drowning prevention and treatment. JEMS