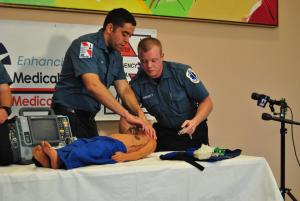 Editor’s Note: Below are two pediatric choking cases. Read about each and then read JEMS Editor-in-Chief A.J. Heightman’s comments and suggestions on why they had different outcomes and how EMS providers can keep their pediatric airway skills sharp.

Grape Obstructs 5-Year-Old’s Airway
By Steven A. Cohen, BS, NREMT-P
JERSEY CITY, N.J. – At a backyard barbeque on July 10, 5-year-old Priscilla Pereira was buzzing around, singing songs and eating grapes when she began to choke. Priscilla’s mother, Ivelisse, saw her child turn purple and go limp. The mother told CBS news, “Honestly she was already gone. She was like gone”¦she was gone”.

A family friend, who is a nurse, was at the barbeque and tried to do the Heimlich maneuver to no avail. Another friend called 9-1-1 for assistance. The 9-1-1 call was received in the HUDCEN (Hudson County Emergency Network), Jersey City Medical Center’s EMS Dispatch Center. EMT Dispatcher Jennifer Pedone screened and prioritized the call while ensuring that the Heimlich Maneuver was being performed.

The first unit on the scene was a first responder engine from the Jersey City Fire Department, led by Capt. Albert Bauer; this first-in crew also found the child cyanotic and unresponsive. Using a bag-valve mask (BVM), firefighters Pedro Reyes and Nelson Justino were able to get a minimal amount of air into the small patient. It was just enough to keep her oxygenated and improve her color.

Shortly after the fire first responders arrived, a Jersey City Medical Center (JCMC) BLS unit manned by EMS Supervisor William Bayer and EMT Joseph Biggy arrived. They inserted an oral airway and continued BVM ventilations. They too were able to maintain the patient’s color and pulse.

JCMC’s ALS unit, staffed by paramedics Brian Moriarty and James High, then arrived on the scene. During direct laryngoscopy, paramedic Moriarty was able to visualize a grape lodged in Priscilla’s trachea and dislodged it with a pediatric Magill forceps. High was then able clear the grape from the airway with a finger sweep.

Paramedics Brian Moriarty and James High demonstrate how they removed a grape from a pediatric patient’s blocked airway.

Once the airway was cleared, and after a short round of BVM ventilations, Priscilla began to arouse and cry for her mother. This was the best sound that the paramedics said they had ever heard. In order to comfort Priscilla, the EMS crew gave her a teddy bear that’s kept on the ambulances for such occasions. She clutched it close to her throughout the short trip to JCMC. On arrival at the hospital, the child was given a thorough examination, mother and daughter were reunited, and Priscilla was discharged to the care and follow-up observation of her mother.

On Aug.10, 30 days after her choking incident, Priscilla got a chance to meet the team of rescuers that saved her life during a press conference at JCMC. The survivor showed no residual signs of the trauma she endured a month earlier, singing for the camera crews and high fiving her rescuers.

This is a story where all of the links of the chain of survival working as planned. There was early access with bystander intervention, rapid fire first response and intervention, solid BLS care and advanced care by a well-trained team of paramedics.

His teacher told authorities that shortly before 1 p.m., the boy made a gasping sound, grabbed his neck and passed out, becoming unresponsive.

A bystander performed cardiopulmonary resuscitation while paramedics were summoned to the preschool at 3525 Cannon Road, the medical examiner’s Office reported. Paramedics took the boy to Tri-City Medical Center, where he died at 1:50 p.m.

JEMS Editor-in-Chief A.J. Heightman, MPA, EMT-P, comments: These two pediatric choking cases had completely opposite outcomes but a common genesis. Small children, particularly those under the age of five, have a habit of putting small objects in their mouth. In the Jersey City case, the fire first responders and EMT crew were both able to ventilate the 5-year-old child until the ALS crew arrived and used direct laryngoscopy and a pediatric Magill forceps to dislodged the grape which had “plugged” the airway like a rubber stopper in a sink.

In the Oceanside case, the object that caused the 3-year-old to choke to death was a pushpin, a common item in schools throughout the world. A pushpin is extremely dangerous if inhaled or ingested because it has a needle-like tip on one end that is a hazard in and of itself. If inhaled into the tiny airway of a young child, it can anchor itself in an unusual position, making it extremely difficult or impossible to dislodge. This is particularly true if it advances past the vocal cord region where it can no longer be visualized. In many cases, a lodged foreign body such as a push pin, can completely occlude the airway.

Both of these cases point out why EMS personnel need to stay current in their airway skills, carry adult and pediatric Magill forceps in their first-in airway bags and bring suction in with them on all airway calls.

In addition, crews need to understand, for their own emotional wellbeing, that there are often young children that get into impossible circumstances and can’t be resuscitated. It’s the nature of our work and a part of EMS that we all hate. But it’s critical that crews understand and accept the fact that, despite their best efforts, young patients are going to die.