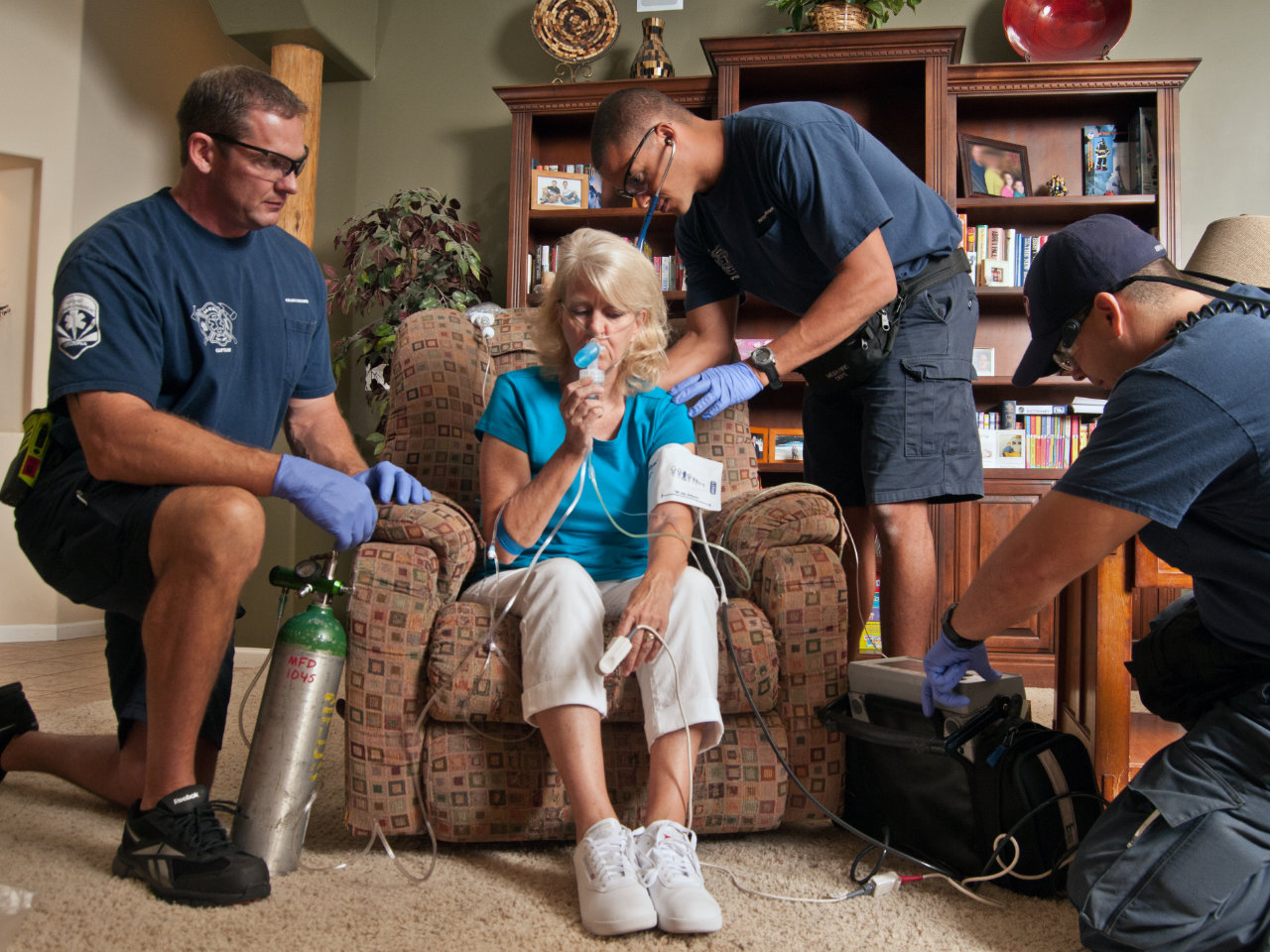 Medic 534, staffed by a paramedic and EMT, is dispatched to a nursing home for a 78-year-old female in respiratory distress.

On arrival, the crew finds the patient in a chair accompanied by two nurses and the administrator on call. The patient is in obvious distress showing fatigue and an increased work of breathing. She is alert to voice, but diaphoretic, lethargic, and unable to speak due to rapid, shallow breathing.

A nurse is administering a nebulizer containing 3 mL of albuterol sulfate/ipratropium. A second nurse states that the patient has been in increasing distress for the last 45 minutes. The nurse also says that the patient has chronic obstructive pulmonary disease (COPD) and is experiencing an “exacerbation.” This is the second nebulizer treatment the staff has administered in the last 20 minutes.

According to the administrator, the patient was discharged from the hospital 3-4 days ago after treatment for an infection. The patient has a history of COPD, non-insulin dependent diabetes, urinary tract infections, and had an ischemic stroke about two years ago. The patient’s medication list is consistent with her medical history and includes a recent prescription for prednisone. She’s allergic to sulfamethoxazole/trimethoprim and penicillin.

On examination, the patient’s respirations are shallow and rapid at 32 breaths per minute. However, her lung sounds are clear bilaterally with good air entry into the bases.

A 12-lead ECG shows sinus tachycardia with no ST elevations or depressions. The nebulizer treatment is discontinued. She is too weak to stand and is lifted to the ambulance stretcher.

A second set of vital signs is taken in the ambulance. The patient remains tachypneic with a respiratory rate of 35. Her oxygen saturation, now on room air, is 96% and her EtCO2 is 19 mmHg. A peripheral IV is established and the patient’s blood glucose is measured to be 373 mg/dL. The patient is able to answer questions appropriately, if briefly, and she remains alert, but in obvious distress. A fluid bolus of normal saline is initiated.

Due to her recent infection, her tachycardia and tachypnea with clear lungs and good air exchange, the transporting medic disagrees with the initial nursing home staff’s assessment of a COPD exacerbation being the diagnosis. Instead, a sepsis alert is patched directly to the ED.

The patient is transported without any further decline in clinical status.

After a full diagnostic workup, the ED physician confirms the diagnosis of sepsis, noting that the patient’s tachypnea is not secondary to a COPD exacerbation but likely respiratory compensation for a metabolic acidosis secondary to infection and hyperglycemia.

Although the pathophysiology of sepsis has been well documented in the EMS literature, the associated respiratory findings, an attempt by the body to correct a metabolic acidosis that can accompany severe sepsis, may be distracting and cause EMS responders to want to treat what can appear to be a primary respiratory condition. The well-known approach, “airway, breathing, circulation,” (the “ABCs”) would seem to place immediate emphasis on correcting rapid and shallow breathing in a patient with or without hypoxia.

Pre-existing conditions, such as COPD, bronchitis, or a recent pneumonia diagnosis may also push providers toward respiratory distress algorithms. However, respiratory distress in a patient with clear lung sounds should alert the medic to the possibility of metabolic, hematologic, or obstructive processes that could cause the patient to present this way. Anemia, pulmonary embolism, pulmonary hypertension and any condition causing a metabolic acidosis, such as sepsis, can cause an increased respiratory rate.

Although a patient with tachypnea will often warrant aggressive treatment via medications and supplemental oxygenation devices, efforts to alter the respiratory rate by aggressively managing the airway with medically enhanced intubation could exacerbate this metabolic problem, shifting a patient further into an acidotic state. This can lead to post-intubation cardiac arrest unless the underlying disease process is simultaneously addressed and close attention is paid to the post-intubation respiratory rate and minute ventilation. In this case, the patient’s rapid and shallow breathing was actually an important compensatory mechanism for her underlying metabolic acidosis.

There are many causes of metabolic acidosis in the human body; we refer to “Acid-Base Balance Understanding is Critical to Treat Patients“ for an overview of acid-base balance and the clinical relevance to the prehospital setting.

One cause of metabolic acidosis is sepsis.1,2 The cause of acidosis in sepsis is often attributed to high serum lactate levels (hyperlactatemia) causing a lactic acidosis. In fact, the etiology of the metabolic acidosis so often seen in sepsis is not purely a lactic acidosis. However, the measurement of serum lactate is routinely stressed due to the Surviving Sepsis Campaign and several studies have even looked at the benefit of measuring lactate in the prehospital setting to try to identify patients that might benefit from earlier aggressive resuscitation in sepsis and also in trauma.3,4 So far, those studies showed mixed results.5,6

Previously, hyperlactatemia was assumed to be a result of tissue hypoperfusion and anaerobic metabolism. Research suggests that the elevated lactate stems from beta-2 adrenergic activation with the body’s stress response and is not purely from hypoxic sources.7,8 Systemic infection produces inflammation within the endothelium, the interior lining of blood vessels. This inflammation can reduce cellular ability to extract oxygen by 50% or more, causing hypoxemia.9 In these cases, simply increasing oxygen delivery will not correct the underlying problem.9 Further discussion of hyperlactatemia is beyond the scope of this article; but it is important to note that hyperlactatemia is typically associated with worse outcomes in sepsis.10-12

The patient in this case presented with multiple etiologies likely contributing to the metabolic disorder. Her underlying infection causing tachycardia and the associated hyperglycemia all contributed to a metabolic acidosis misinterpreted by the nursing home providers as a primary respiratory problem.

The mechanism of respiratory compensation is an important and initial attempt by the body to self-correct metabolic acidosis. Here, the body increases the respiratory rate to lower carbon dioxide levels in the blood. This happens as the lungs rapidly “blow off” carbon dioxide thereby creating an alkaline state (high pH) in the lungs through which blood plasma flows. Ideally, the acidic blood will shift toward normal by passing through the alkaline state.

When a patient requires intubation in the setting of a significant metabolic acidosis, the body’s natural compensatory mechanism, the respiratory rate, is taken away. In this situation, if the post-intubation minute ventilation (respiratory rate multiplied by tidal volume) does not closely match the pre-intubation minute ventilation, the acidosis will worsen as the lungs are not sufficiently blowing off carbon dioxide to compensate for the acidic state. Metabolic acidosis can lead to severe cardiac dysrhythmias and cardiac arrest.

It’s important for prehospital providers to be able to differentiate metabolic disturbances in the setting of respiratory distress and not be fooled into thinking tachypnea always has a respiratory cause. The physical exam and adjuncts such as end-tidal capnography can assist in the prehospital diagnosis.

A COPD exacerbation generally presents as diminished lung sounds, wheezing on exhalation, and a prolonged expiratory phase. Here, a patient will attempt to compensate for the inflammation and mucus accumulation associated with the destruction and narrowing of peripheral airways and a subsequent lack of available space for air exchange. The EtCO2 may be increased in these patients as carbon dioxide accumulates due to air trapping; however, the physiologic deadspace associated with some forms or COPD may lower the EtCO2. Without knowing the patient’s baseline EtCO2, this value may be difficult to interpret in this setting and the physical exam will be more diagnostic.

In this case, although the patient had a history of COPD and appeared to be in respiratory distress, her normal lung sounds and air entry heard on auscultation, the history of recent infection, and the decreased capnography  reading suggested she likely had a metabolic acidosis associated with sepsis.