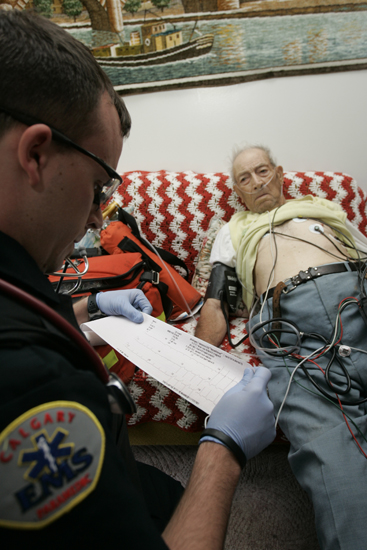 The call initially seemed simple: A 67-year-old man who had a near-syncopal episode in church. By the time the first-response engine and paramedic crew arrived on scene, the man was feeling better and declined transport to a hospital. But to the two East Texas Medical Center paramedics, the patient looked far too sick to be let go. When they stood him up he started to faint again and became significantly tachycardic and hypotensive.

They spent over 20 minutes on scene convincing the man and his wife that his shortness of breath and anxiety weren’t normal and that he needed immediate transport to a hospital. The patient finally agreed to go to the ED and the assessment and tests he received there revealed massive pulmonary embolisms in both lungs. The staff told his wife that if he’d gone home he would have surely died.

High Mortality
Pulmonary embolism (PE) is a high-mortality condition that affects more than 600,000 people a year, killing almost a third of those affected.1 The condition occurs when a clot that has formed in the veins, typically in the lower extremities, becomes dislodged and enters the bloodstream.

When the blood from the right side of the heart is pumped out to the arteries in the lungs, the clot gets stuck in the pulmonary vessels as these vessels get narrower. This causes a sudden obstruction of blood flow to the lungs, pulmonary hypertension and severe strain on the heart as it works to maintain adequate hemodynamics.

The pulmonary embolism causes infarction of the lung tissue itself and the patient perceives this as sharp pleuretic chest pain. Because part of the lung is now dead or dying, the patient becomes hypoxic and the respiratory rate increases to compensate for the nonfunctioning lung tissue. The patient may then begin to have massive hemoptysis.

The cardiovascular system undergoes sudden changes as well due to the acute obstruction. The heart speeds up as it initially tries to compensate for the impaired blood flow, but, if the size of the clot is overwhelming, it can’t keep forward flow and cardiogenic shock occurs.

Depending on the size of the clot and how much blood flow is being obstructed, pulmonary embolism symptoms range from mild shortness of breath to respiratory distress and to cardiac arrest.

Difficult Diagnosis
Unfortunately, the diagnosis is not straightforward to make. The classic presentation for PE taught in EMT and paramedic classes is the triad of shortness of breath, chest pain that’s worse with inspiration, and coughing up blood. But most patients don’t present with all three symptoms, so it’s important to keep this diagnosis in mind for all patients who present with sudden onset of tachypnea, tachycardia and hypoxia.

PE should also be suspected in patients with new onset of wheezing or rales (crackles) and no previous history of underlying lung disease. If there’s suspicion for PE, the patient should also be examined for evidence of deep vein thrombosis (DVT), because this may be the location where the clot originated.

The patient should be asked about recent leg pain or swelling and examined for unilateral leg or arm swelling, which would indicate DVT.

In cases of massive PE, the most common presentations are shock with systolic blood pressure less than 90, syncope or cardiac arrest.

Risk Factors
Patients with a PE typically have risk factors that have caused them to be more likely to form blood clots. These risk factors can be divided into three assessment groups.

The first group of PE risk factors are the factors within the blood itself that makes it hypercoagulable, or more likely to clot. These factors include a history of cancer, pregnancy or being less than four weeks postpartum, taking hormone therapy or birth control pills, and/or a history of blood clotting disorders. These are questions the provider can ask the patient’s family and friends if he or she is unable to answer due to respiratory distress.

The next group of PE risk factors includes those that keep the blood from moving like it normally would and thus make it more likely to clot. These include a history of bed rest for more than 24 hours, a recent cast or external fixation device, or recent long-distance travel either by airplane or car.

The final group of PE risk factors includes conditions that have caused damage to the veins themselves, such as recent surgery or trauma. These damaged veins can become the origin of the clot formation.

In the case of our patient, he had a history of prostate cancer and had recently visited family who lived far away. He was also a smoker–although this isn’t always considered an independent risk factor for PE, it’s believed to contribute.

In addition, his wife related that he’d been complaining of leg pain, which she and her husband had attributed to a new prescription medication. The patient hadn’t been able to put these symptoms together but, by careful questioning aimed at determining his risk factors for PE, it was clear he was high-risk and that PE was a potential cause of his syncopal episode and hemodynamic instability.

Field Treatment
EMS field treatment for PE is mainly supportive. Suspected PE patients should be placed on high-flow oxygen both to relieve the patient’s hypoxia and reduce the patient’s anxiety. A large bore IV, 16—18 gauge, should be placed–preferably in the anticubital fossa. The reason for this placement is that the patient will likely get a CT scan of the chest with IV contrast in the ED, and in order for the test to be timed correctly the IV must be the correct caliber and in the correct location.

The patient’s pain can be treated with narcotics as long as careful attention is paid to prevent hypotension or worsening of it. In hypotensive patients, the administration of 500—1000 cc of fluid (normal saline) is warranted. However, administering more than that may worsen the strain on the heart and cause pulmonary edema.

If the patient remains hypotensive, a vasopressor that doesn’t cause significant tachycardia, such as Levophed (norepinephrine), is recommended. Most patients who have chest pain as a symptom of their PE will receive aspirin and nitroglycerin as part of established protocol, and these medications are unlikely to either help or hurt the patient.

A 12-lead ECG should be assessed for a S1Q3T3 pattern, which is almost diagnostic of PE. In this ECG rhythm, there’s a prominent S wave in lead I, and a Q wave and inverted T wave in lead III. (See Figures 1a and 1b.)

Figure 1a: S1Q3T3 pattern ECG in patient with pulmonary embolism 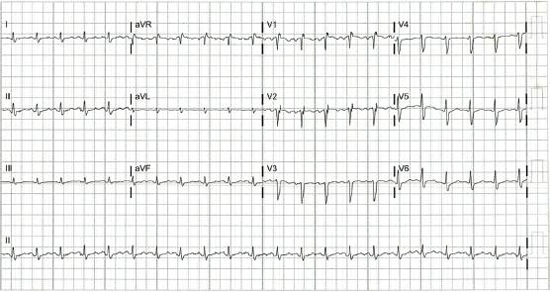 The S1Q3T3 pattern is only seen in 20% of patients with PE. The most common ECG finding in PE is sinus tachycardia. However, all EMS providers should get in the habit of specifically looking for S1Q3T3 in any ECG with sinus tachycardia or any case in which PE is suspected.

Hospital Arrival & Findings
The patient arrived in the ED with an 18-gauge IV, on O2 by nasal cannula and with adequate blood pressure. He remained tachycardic in the 130s, but his oxygen saturation had improved from 93% to 98%.

The field ECG was significant for sinus tachycardia but no other abnormality was noted. The patient was alert and oriented times three (person, place and time) and apologetic for coming to the ED. An initial workup was begun to include labs, chest X-ray and ECG, but the patient acutely decompensated while being positioned for X-ray.

He was found to be altered, hypotensive and sustaining a heart rate in the 150s. He was given a fluid bolus and repositioned, and a crash cart was brought to the bedside. A repeat ECG showed S1Q3T3.

Despite his instability he was able to get a CT scan, when he again decompensated. However, the scan was able to be completed with striking findings.

The patient had massive bilateral saddle embolisms that completely obstructed blood flow in one lung and severely restricted the other. The patient’s entire blood volume was stopped in the lungs except for a small amount that was able to move around the clot on one side.

The contrast dye injected in the blood that should’ve been traveling forward from the heart to the lungs and then out to the body was moving backward through the heart into the vena cava and liver. (See Figure 2.) An emergent 3 a.m. call was made to the cardiothoracic surgeon. 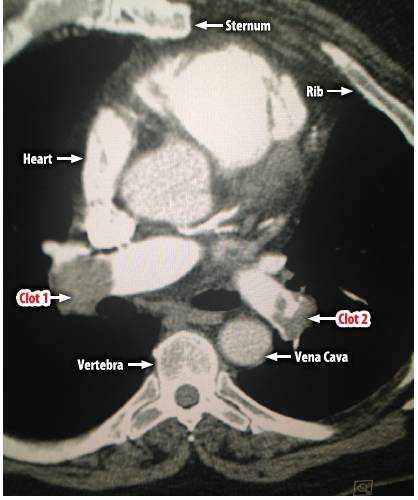 Diagnosis
PE is typically diagnosed through a CT scan with an IV contrast that shows all the vessels in the lungs as they split into smaller and smaller sections. If a vessel splits in two but only one side receives contrast, then it’s because there is a clot obstructing the contrast flow in the other side.

If the clot is large enough it will obstruct blood flow to both parts of the vessels right where it splits. This is referred to as a saddle embolism, because the clot resembles a rider on a horse with the legs blocking the vessel.

If the patient has underlying renal disease, they can’t be given contrast because it is a nephrotoxic drug, and if the patient has poor kidney function, it will destroy the remaining kidney function and cause the kidney failure requiring dialysis. These patients will get a ventilation/perfusion quotient (VQ) nuclear scan, which is more time and labor intensive, and less diagnostic.

Most pulmonary emboli are treated with anticoagulation therapy, typically with heparin. This stops the current clot from growing and new ones from forming, which gives the body time to start dissolving the clot on its own. However, in a patient with massive embolism with hemodynamic compromise, the patient doesn’t have the ability to wait.

The rate of death for patients in these cases is 60% in the first six hours.1 Therefore, a more aggressive approach is considered during this time period: fibrinolysis or surgical thrombectomy.

Fibrinolytic therapy consists of powerful medications that directly break up clots. There are multiple contraindications to its use and about 20% of patients who get clot busting drugs suffer a major bleed, the most common of which is intracranial hemorrhage.1

Conclusion
The patient and his wife have a long discussion with the cardiothoracic surgeon. He is hemodynamically unstable, intermittently syncopizing and running out of time. The surgeon doesn’t think he’ll live through the operation if they go through with it. But if they give tPA, they can’t go back later to do the surgery because the bleeding risk will be too great. The patient decides to try tPA.

After the patient’s three-day stay in the ICU, I spoke to the patient. He was immensely grateful the paramedics didn’t let him go home that night. He said he had felt better when the ambulance arrived and planned to go home and go back to bed because he still felt tired. Had the paramedics let him go home, he never would have woken up. This patient asked me to thank the responding fire crew and paramedics Tony Hight and Cody Simon for saving his life and to thank all EMS and fire crews for the care they give.