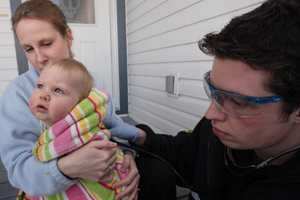 At approximately 11:30 p.m. on Oct. 26, 2010, my partner and I were dispatched to a residence for a child with shortness of breath and a history of croup. On arrival, we found a six-year-old boy in his father’s arms in a steam-filled bathroom. The patient was agitated, in obvious respiratory distress and exhibiting the classic seal-like barking cough commonly associated with croup. The parents said the patient had been suffering from croup for a few days but had suddenly become markedly worse that evening. The parents also reported that the patient had Down syndrome.

Assessment
The initial patient assessment included pale skin with poor capillary refill, clear lung sounds, pulse oximetry (SpO2) reading of 81%, respiratory rate of 60 breaths per minute, heart rate of 180 beats per minute (BPM), increasing agitation and audible stridor. The patient refused to allow anyone but a parent to touch him. The more upset he became, the harder he coughed.

My partner and I assisted the patient, who was in his mother’s arms, to the ambulance and secured them both on the stretcher. It’s understood that securing a child and parent together is hazardous, but in this case, we felt the risk of complete airway obstruction was more pressing. Blow-by oxygen therapy was initiated immediately, but the patient was so agitated that he wouldn’t tolerate the mask. Ongoing assessment revealed a sinus tachycardia on the monitor between 170 and 180 BPM. The patient’s SpO2 reading remained in the low 80s.

In the emergency department (ED), a patient in this condition would likely receive nebulized racemic epinephrine, but Pittsburgh EMS doesn’t carry this medication. However, the agency does carry epinephrine 1:1,000 concentration, which is commonly used as an intramuscular injection for patients suffering from anaphylaxis. With permission from medical command, I placed 5 mg of 1:1,000 epinephrine in a nebulizer and administered it to the patient with the blow-by technique.

Expeditious transport to the local children’s hospital was initiated. Within the first few minutes of medication administration, the patient began to relax. His coughing eased, his respiratory and heart rates slowed, and his color improved. On arrival at the ED, he was resting with an SpO2 reading of 98%; a respiratory rate of 30 BPM unlabored; and a heart rate of 125 BPM. In addition, his coughing had stopped. IV access wasn’t attempted.

Discussion
Croup is an infection of the upper airway, specifically the vocal chords. It’s most commonly seen in infants. Often, it’s caused by a viral infection, such as the parainfluenza virus, adenovirus, influenza virus and respiratory syncytial virus (RSV).
The most identifiable symptom is respiratory distress with a loud barking cough, which is related to severe swelling in the upper airways. The symptoms are often worse at night. Patients suffering from croup can become hypoxic, which may result in agitation and increased edema in the airways.

Consequently, calming measures are important, and it’s another reason providers allowed the patient and his mother to ride together on the stretcher. Further, unless the patient is in respiratory arrest, nothing should be placed in their mouth, and IV access is generally not indicated.

It’s unusual for a six-year-old patient to have severe croup because as a child grows, their airway becomes larger, and the inflammation caused by the infection is less likely to cause distress. The fact that our patient suffered from Down syndrome is a possible explanation because individuals with this condition tend to have smaller airways and narrower nasal passages.

Treatment
Many parents find that their children feel better if they’re exposed to alternating outside night air and warm steam, and most patients don’t require emergent hospitalization. Our patient had received a steroid injection 24 hours prior to our arrival, but nonetheless became worse.

When a croup patient is in acute distress, they’re often given nebulized racemic epinephrine. Epinephrine binds to the alpha and beta adrenergic receptors and causes systemic vasoconstriction, increased heart rate and dilation of the smooth muscles in the airways. Racemic epinephrine is an equal mixture of epinephrine isomers–chemical compounds that have the same molecular formula but different structural formulas.

It’s important that paramedics understand the unconventional uses of the medications they carry. With appropriate medical direction, an aggressive paramedic can do much more than what’s listed in the protocol manual. JEMS