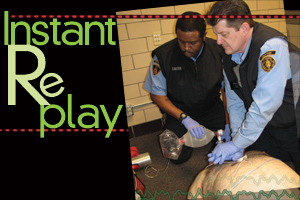 Your EMS unit is providing on-site medical assistance at a triathlon when you receive a call that a 45-year-old athlete suddenly collapsed while running. When you arrive, he’s receiving bystander, hands-only CPR. As you assess the patient, you don’t see any evidence of trauma.

You and your partner initiate resuscitation using your latest CPR sensing-feedback (CPR-SF) technology. The initial rhythm on the monitor is ventricular fibrillation (v-fib). As your partner performs CPR, the monitor gives you audio and visual feedback that the initial chest compressions aren’t deep enough and are too rapid, so your partner adapts CPR accordingly.

On the third defibrillation attempt, after two minutes of post-shock CPR, the patient converts to normal sinus rhythm (NSR) and achieves return of spontaneous circulation (ROSC). Prior to intubation, he begins to arouse. His mental status continues to improve, and he’s awake and talking on arrival at the closest cardiac receiving hospital.

When you return to your station, you download the CPR process data from the monitor-defibrillator and conduct a debriefing session with the personnel involved in the resuscitation. You review the percentage of hands-off chest time and the chest compressions that were not within correct range for rate, depth, recoil and duty cycle.

You then transfer the data to a HIPAA-exempt, de-identified database as part of a research consortium your department is participating in to assess the affect of CPR quality on outcomes. The next day, you’re notified that the 45-year-old cardiac arrest patient is stable and resting in the cardiac intensive care unit, and will make a full recovery.

Low Survival Rates
This scenario regularly occurs in many communities across the country. Approximately 250,000 people in the U.S. die from out-of-hospital cardiac arrest (OHCA) each year, making it one of the leading causes of death.(1) Because of the critical nature of cardiac arrest and its quantifiable outcomes, cardiac arrest care is often used as the measuring stick for an entire EMS system.

Because of these advances and a revised approach to resuscitation, we’re now seeing an increasing number of cardiac arrest patients leaving the hospital to lead healthy, productive lives.

High-quality CPR has been shown to improve survival and neurological outcomes after OHCA.(2—5) Despite this evidence, CPR is delivered inconsistently.(6—9) For example, one study found that paramedics ventilated intubated cardiac arrest patients at a rate of 30 per minute, which is three times faster than the 2005 and 2010 American Heart Association (AHA) Guidelines on CPR and Emergency Cardiac Care recommendations.10 Recent reports reveal that EMS systems focused on delivering high-quality CPR to OHCA patients have substantially improved rates of neurologically intact survival.(11—13)

In 2005, authors of one study found that during in-hospital cardiac arrests, compression rates were performed within 10 compressions per minute of the 100-per-minute AHA Guidelines recommended rate less than one-third of the time.(18) Those patients treated with compression rates close to the Guidelines’ recommendation were more likely to achieve ROSC.

Another study reported that during 176 OHCAs, 62% of chest compressions were too shallow and 42% were performed with incomplete recoil.(7) This failure to consistently implement high-quality CPR shouldn’t be surprising. The 2005 AHA Guidelines’ endorsement of “effective” chest compressions as a class I recommendation was a relatively recent event, following years of emphasis on interventions not shown to affect survival, such as early intubation and intravenous medications. The 2005 and 2010 AHA Guidelines recommend the use of feedback devices to assist crews in optimizing their CPR.

CPR-SF Technology
CPR-SF technology measures and records various components of CPR quality, such as chest-compression rate, depth, chest-wall recoil and ventilation. The technology is integrated into cardiac monitor/defibrillators to provide real-time audio and visual feedback to the person performing CPR during a real resuscitation or in training exercises. Recorded data can be used in a number of capacities, including a review of performance in a debriefing after the patient encounter or for research purposes. Examples of CPR-SF technology include Philips Q-CPR, ZOLL Real CPR Help and Physio-Control Compression-ventilation Metronome plus CodeStat with Advanced CPR Analytics (see Table 1 for more information about the available technologies).

The bottom line: CPR-SF technology offers the potential to facilitate the translation of CPR guideline recommendations into clinical practice through real-time feedback, education and quality surveillance. The optimal type and quantity of feedback remains to be determined.

The Survey
An Internet survey was administered to all members of the National Association of EMS Physicians (NAEMSP) on May 15, 2008. The primary questions addressed the awareness of CPR-SF technology, the prevalence of ownership of CPR-SF devices, the reasons for using the devices and the barriers to their implementation.

Survey Results
Twenty-six percent of 1,250 NAEMSP members responded to the survey. Forty-seven percent self-identified as medical directors, and 72% reported being physicians. Respondents were from 42 states and represented a diverse group of EMS systems.

Thirteen of the 15 systems employing CPR-SF devices during field resuscitations use the devices for real-time CPR quality feedback, and 10 record CPR quality data for post-event review. In six of the systems, the audio feedback is either usually (or always) kept “on.”

Table 2 shows how the expectations of the 24 medical directors in systems owning CPR-SF devices have been met. In open-ended responses, nine of the 13 with partially realized expectations suggested that it’s too soon after implementation for them to know the successes and failures. Eleven of 16 medical directors who have CPR-SF devices but don’t have 100% of their units equipped report that they’ll likely acquire additional devices.

Many EMS systems reported being financially challenged, and, as such, the primary barrier to the purchase of CPR-SF devices was cost, followed by insufficient available information about the devices. In their open-ended comments, respondents suggested when the price of CPR-SF devices is driven down by more widespread availability, and when the technology becomes routinely incorporated into defibrillators, it will be easier to justify their purchase.

The third most frequently reported barrier to purchase was inadequate science to justify their use. In 2005, the AHA Guidelines gave the use of CPR-prompting devices a class IIb recommendation, stating that they may be useful for in-hospital and out-of-hospital settings.(1)

Since the publication of the 2005 Guidelines (reflected in changes in the 2010 Guidelines), increasing evidence has been published that supports the effectiveness of CPR-SF devices, and the multi-center international Resuscitation Outcomes Consortium (ROC) is actively studying device-assisted CPR.(19—21)

Thirteen of the 15 systems that use the devices during field resuscitations use them for real-time quality feedback, and 10 collect CPR quality data for delayed review. While a majority of systems use real-time feedback (either audio or visual), just six medical directors report working in systems where the audio feedback is either usually or always kept “on.”

In their open-ended questions, a number of respondents expressed concerns about bystanders hearing the prompts and interpreting them as the patient receiving substandard care. This is an important practical limitation because using a visual prompt to guide CPR quality requires continuous sighting and an unimpeded view of the monitor. Thus, although only a small number of respondents (two) reported the audio prompts as a barrier to purchase, the prompts may be a significant obstacle to complete implementation of the technology.

Twenty-two of the 24 medical directors in systems owning the devices reported having their expectations either realized or partially realized, and 11 of 16 medical directors who have CPR-SF devices but don’t have 100% of their units equipped report that they’ll likely acquire additional devices. This suggests a certain degree of satisfaction with the technology.

Conclusion
Despite a high level of awareness of CPR-SF technology by EMS medical directors, few EMS systems currently possess the devices, fewer use them during field resuscitations, and an even smaller number use them to their full potential. Cost and the need for further outcomes research were cited by EMS medical directors as the main barriers to widespread implementation.

It recent years, several basic facets of cardiac arrest care have been shown to consistently improve outcomes. The ROC and other research groups are producing high-quality research that’s being translated into clinical practice. The resultant emphasis on bystander CPR; high-quality, professional CPR; early defibrillation without undue pauses in chest compressions; the avoidance of hyperventilation; and the induction of therapeutic hypothermia have resulted in improved outcomes from cardiac arrest that providers can readily see.

There’s a palpable, national energy regarding the positive effect of optimal cardiac arrest care. Providers are anxious to become involved and do what they can in their communities to improve outcomes. So it’s reasonable to assume that as more research becomes available demonstrating the ability of CPR-SF devices to improve CPR performance and outcomes, the demand for these devices will increase. Accordingly, the technology should evolve, making the devices more effective, user-friendly, accessible and affordable. JEMS