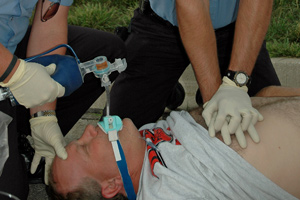 For almost two years I’ve been presenting a lecture on the dangers of excessive oxygen. The presentation, as you might imagine, was met with a good dose of healthy skepticism. Since then, there have been numerous studies detailing the detrimental effects of excessive oxygen. Even the American Heart Association (AHA) made mention of the lack of evidence supporting the use of supplemental oxygen for non-hypoxic patients. Be assured, I’m not boasting. I’m no smarter than the next guy. I just tend to follow the scientific literature, including some of the basic science literature, closely.

In the same light, I recently read an editorial in the New England Journal of Medicine that accompanied a paper by Myron L. Weisfeldt, MD, that showed that home AEDs were relatively ineffective in treating cardiac arrests. This editorial, written by Gust H. Bardy, MD, challenges one of the most fundamental principles of EMS–the effectiveness of CPR.

Bardy questions whether Weisfeldt’s negative home-AED findings were related to a lack of effectiveness of AEDs or more related to a lack of effectiveness of CPR. Bardy wrote, “As an alternative to a home AED, the increased use of CPR does not make sense to me. At best, CPR represents a placeholder. Overall survival rates remain poor, and 300,000 sudden cardiac deaths still occur annually in spite of national CPR awareness. One simple reason for such gloomy results may be the logistic impossibility of responding to a broadly disseminated, quasirandom event that causes death within minutes. Yet there may be another, more subtle reason for this bleak lack of progress. If CPR were a drug or a surgical procedure, its value would be tested prospectively, but it has not been. Could it be that innovation in the field is hampered by a reluctance to let go of an entrenched approach that has only the appearance of value?”

Stated another way, does our belief that CPR is the best treatment for cardiac arrest actually hinder investigation of other possible treatments?

Bardy supports his position in the following ways:
1. Improvements in cardiac arrest resuscitation in public venues (e.g., airports, casinos and shopping malls) have resulted from use of AEDs and not from CPR.
2. Despite 40 years of CPR, the overall national cardiac arrest resuscitation rate has remained dismal (about 8%).
3. The benefit of mass CPR training may only be related to the fact that the trained rescuer recognizes the problem (cardiac arrest) sooner, summons EMS and defibrillation is provided quicker.
4. Financial incentives keep CPR training a major emphasis. Providing and licensing CPR courses provides many organizations and companies (both profit and nonprofit organizations), such as the AHA, a significant source of income.
5. CPR isn’t harmless. Liver lacerations, crushing of coronary arteries, mediastinal hemorrhage, rupture of hollow organs (esophagus and intestines) and other complications have all been reported with CPR.
6. CPR performed after successful defibrillation may re-induce ventricular fibrillation (v-fib) in up to 22% of sudden cardiac arrest victims. Stated another way, we resuscitate patients with defibrillation and place them back in v-fib with CPR.

I think there’s a seventh reason that Bardy overlooked. The recent improvement in neurological outcomes in cardiac arrest hasn’t been due to CPR–but due to induced therapeutic hypothermia. Despite this, many EMS agencies are touting their improved cardiac arrest resuscitation rates as being related to CPR when, most likely, they’re related to more rapid defibrillation followed by therapeutic hypothermia if the patient experiences a return of spontaneous circulation.

Bardy ends his editorial by writing, “It is time to reassess the value of CPR, not dismiss definitive therapy with defibrillation. On purely structural grounds, it is difficult to see how a prospective, randomized clinical trial comparing CPR with no CPR could result in a win for CPR if the time to the 9-1-1 call is equilibrated by means of randomization. The worse that can happen with a neutral trial result is that we stop spending hundreds of millions of dollars and millions of hours of “˜training’ on a “˜therapy’ that makes people feel good but does little else. The cold, hard facts of the persistently low survival rate with the already existing national embrace of CPR make it hard to do worse.”

Whether Bardy is correct remains to be seen. But what he says makes sense, and I respect his courage to question the status quo. Mark Twain summed this up well when he wrote, “The man with a new idea is a crank until his idea succeeds.” Mark Twain is my hero, and Bardy is anything but a crank.