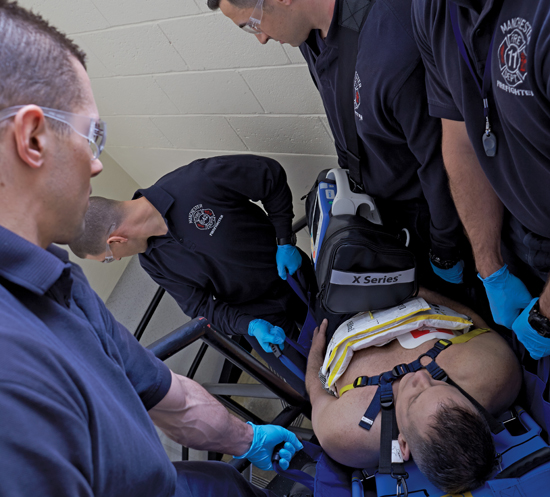 Over the years, there have been many proposals about how long EMS should continue CPR and when to decide that further resuscitation is futile.

A National Association of EMS Physicians (NAEMSP) position statement in 2000 proposed that “an adequate effort” of CPR was 20 minutes, based on limited data, and this number has persisted in many protocols throughout the country,1 although the number isn’t repeated in more recent NAEMSP positions.2,3

The American Heart Association (AHA) 2015 Guidelines discuss the limited data on how long to continue resuscitation, and ultimately choose not to make any recommendation because of such insufficient data.4 This leaves open the question, “How long should we continue CPR when pulses don’t return?”

Although the maximum tolerated duration of CPR may not be known precisely, there are evidence-based guidelines for identifying patients for whom extended resuscitation is futile. The most carefully researched BLS and ALS termination of resuscitation algorithms were based on analysis of a large number of resuscitations in multiple Canadian EMS systems.5,6

There were no survivors among patients who met all five criteria in a cohort of patients with 5.1% overall survival to discharge.7

When ALS and BLS termination of resuscitation rules aren’t met, expected survival may be higher than for the overall cohort.6 For example, in a series of patients with 5.4% overall survival, patients where the BLS rule was negative (at least one of the three criteria wasn’t met) survived at a rate of 11.9%.

Among patients where the ALS rule was negative (at least one of the five criteria wasn’t met), survival was 7.9%. Therefore, it’s reasonable to continue CPR efforts in patients who don’t meet these rules.

Recent studies examined how total duration of resuscitation was related to the odds of favorable functional recovery. In a series of 1,014 patients in Pittsburgh who had an overall 11% survival to hospital discharge, 90% of the patients with good functional status (modified Rankin score 0—3) at hospital discharge had return of pulses within 16 minutes of the paramedics initiating CPR.8

Supporting this implication, a Korean database found that EDs that have an institutional policy to continue CPR for only 20 minutes had lower survival (2.1%) than hospitals who continued CPR for 20—30 minutes (5.2%) or > 30 minutes (5.6%).9

How can we recognize the 10% of patients where efforts > 20 minutes are worthwhile? In many of these cases, the patient is “coming and going.” For example, a patient has brief responses to rescue shocks, but rapid re-fibrillation, resulting in many brief periods of circulation with lots of brief periods of CPR in between.

When the total number of shocks gets into double digits, that patient is trying hard not to die. Other patients have occasional pulses after vasopressors but then rapidly deteriorate to pulseless electrical activity. These patients have severe cardiogenic shock or other shock that may require mechanical support while the cause is treated.

In both of these situations, there’s some minimal or interrupted spontaneous circulation during the cardiac arrest, potentially prolonging the tolerance to CPR.

Waveform capnography is one tool to recognize the patient with preserved circulation during CPR. Excretion of CO2 requires good blood flow to the lungs and continued metabolism by the patient.

High end-tidal carbon dioxide (EtCO2) ( > 20 mmHg) during CPR is a sign of life just like continued electrical activity in the ECG. It’s reasonable to continue resuscitative efforts longer in a patient who’s excreting CO2 during CPR.

Conversely, the 2015 AHA Guidelines suggest that failure to achieve EtCO2 > 10 mmHg after 20 minutes of CPR may be used to support termination of CPR.10

Because measurement of CO2 may have technical glitches, the Guidelines caution that this number should be used in conjunction with other clinical considerations and ideally measured via endotracheal tube.

Taken together with the termination of resuscitation algorithms, these data suggest a clinical approach for deciding how long to continue CPR that’s based on clinical features and clinical response specific to the patient, not a set time interval. (See Figure 1.) 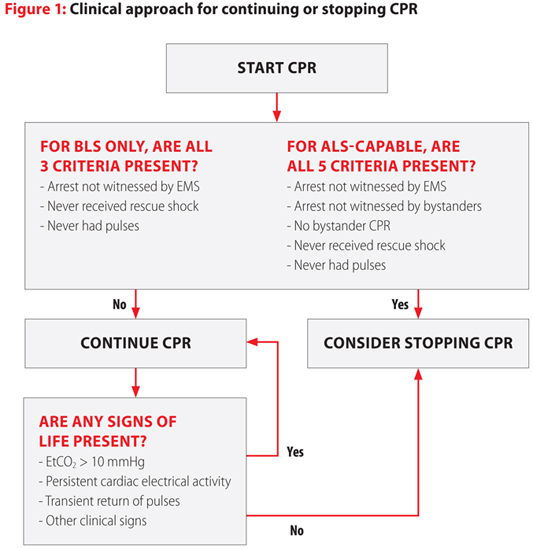 The probability that CPR and drugs alone will restore pulses declines over 20—25 minutes of resuscitation, and it would be desirable to have an alternative plan for patients who still show signs of life.

There are at least two other potential destinations for the patient who’s tolerating long CPR: extracorporeal cardiopulmonary life support (ECLS) and emergency angiography with ongoing CPR.

Both of these destinations require an integrated system dedicated to providing advanced care and with premeditated plans and criteria for invoking these pathways.

However, systems that implemented these approaches have demonstrated that select patients can have reliable rates of good outcomes after very prolonged CPR.

ECLS consists of cannulating large arteries and veins in order to start cardiopulmonary bypass. This procedure requires surgical expertise, perfusionists and an intensive care unit experienced with the care of these patients.

Once ECLS is instituted–a 30—45 minute procedure–the cardiopulmonary bypass machine has completely replaced cardiac activity. The patient can have other procedures to reverse the cause of cardiac arrest: coronary angiography, pulmonary embolectomy or other treatments.

Although ECLS is performed in many parts of Asia, availability remains limited in the United States. However, the number of programs capable of performing ECLS will probably increase over the next decade.

Nevertheless, ECLS will only be appropriate for highly selected patients who are both strong (i.e., young) enough to tolerate the procedure and who have potentially reversible causes of cardiac arrest. When ECLS is used, good functional recovery has been reported for patients with total CPR durations of 60—75 minutes or even durations of 80 minutes.11,12

For patients suspected to have cardiac arrest from acute coronary occlusion, another approach is to perform coronary angiography with ongoing CPR. Cardiac arrest can be refractory because there’s ongoing cardiac ischemia.

Mechanical CPR devices are now available to perform chest compressions in the tight spaces under the fluoroscopy arm of the cardiac catheterization suite.

Several centers have reported successful opening of a blocked coronary artery during CPR, allowing the patient to recover cardiac activity and do well.13

Total durations of CPR in these series of patients ranged from 45—240 minutes. Like ECLS, this resource-intensive approach needs to be premeditated by an institution as a heroic pathway for selected patients who are most likely to benefit. Transport of selected patients requiring prolonged CPR for ECLS or for angiography during CPR is physically difficult. Although the Guidelines don’t recommend mechanical CPR as routine replacement for high-quality manual CPR, the Guidelines acknowledge that mechanical CPR can play an important role in settings where it’s hard to perform high-quality CPR, which would include the back of a moving ambulance or during performance of advanced procedures.14

There are some patients for whom prolonged CPR is futile. The termination of resuscitation algorithms usually can identify these patients with less than 20 minutes of CPR. When these rules aren’t met, 90% of patients who will respond to conventional CPR do so within 16—24 minutes.

When preserved excretion of CO2 on waveform capnography, persistent cardiac electrical activity, or other clinical signs suggest that CPR is generating good blood flow in an individual patient, prolonged resuscitation still may result in good outcomes.

Developing programs and systems to deliver mechanical cardiac support for medically eligible patients when conventional CPR fails can result in good outcomes even after 60—80 minutes of CPR. 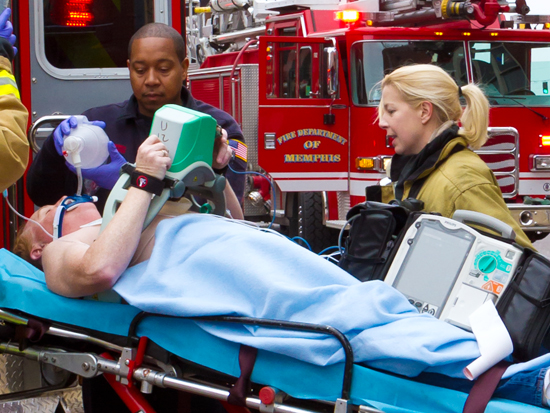 Mechanical CPR devices are proving to be valuable during prolonged resuscitations and where transport in a moving ambulance is involved. Photo Roger Cotton

9. Cha WC, Lee EJ, Hwang SS. The duration of cardiopulmonary resuscitation in emergency departments after out-of-hospitalcardiac arrest is associated with the outcome: A nationwide observational study.Resuscitation. 2015;96:323—327.

13. Larsen AI, Hjà¸rnevik AS, Ellingsen CL, et al. Cardiac arrest with continuous mechanical chest compression during percutaneous coronary intervention. A report on the use of the LUCAS device.Resuscitation. 2007;75(3):454-459.