More
Home Patient Care Cardiac & Resuscitation Variabilities in the Use of IV Epinephrine in the Management of Cardiac... 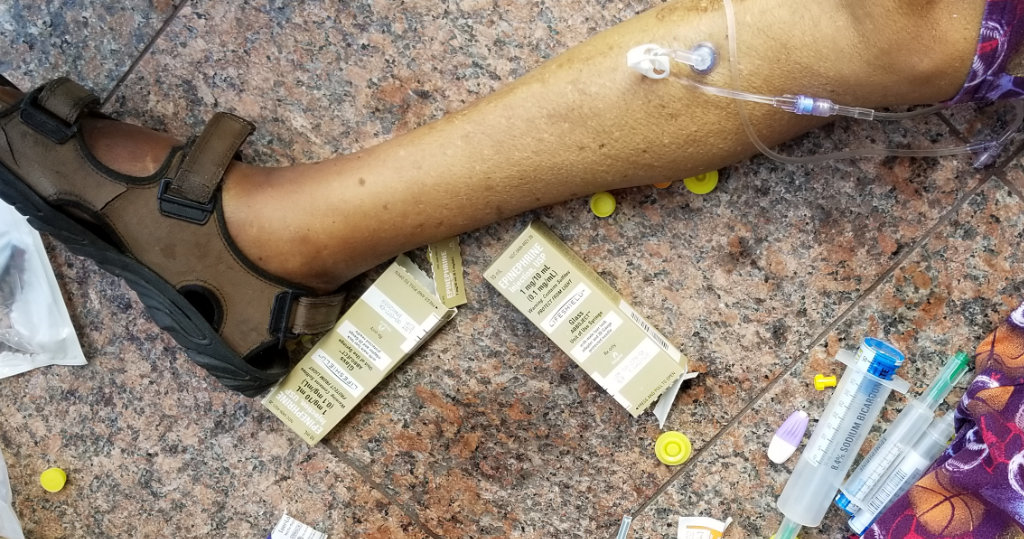 Animal studies in the 1960s first demonstrated the benefits of using epinephrine alongside external compressions and external shock to achieve return of spontaneous circulation (ROSC) in arrested and asphyxiated dogs.1—4 Since then, epinephrine has become integral to the performance of advanced cardiac life support (ACLS) care.

The American Heart Association’s (AHA) recommendations in the Emergency Cardiovascular Care (ECC) Guidelines are that a standard dose of 1 mg of 1:10,000 epinephrine every 3—5 minutes “may be reasonable for patients with cardiac arrest.”5

No maximum total dose is delineated, and 1 mg every 3—5 minutes is recommended to be given as needed. Furthermore, no distinction is made in the manual for epinephrine dosing in ventricular fibrillation (v fib) vs. ventricular tachycardia (v tach), or shockable rhythms (v fib and v tach) vs. non-shockable rhythms (asystole, pulseless electrical activity [PEA]) in arrest.5

Epinephrine acts on adrenergic receptors in the body to help reverse cardiac arrest and promote ROSC.6 During compressions, vasoconstriction from epinephrine acting on alpha-1-adrenergic receptors helps increase the efficiency of coronary perfusion so that the heart can return to functional capacity; however, this may be at the expense of other organs and the systemic circulation.5,7,8

Studies have shown the alpha-1-adrenergic effects of epinephrine significantly decrease microcirculatory blood flow in the brain,7,8 and are associated with decreased systemic oxygen delivery and consumption, higher lactic acid levels9 and sensitized platelet responsiveness,10 the last of which can exacerbate heart conditions and increase the risk of repeat myocardial ischemia.7

arrest. Each medical director was asked five questions that addressed dosing, method of administration and distinction of heart rhythms.

A total of 41 EMS medical directors, representing large urban EMS systems of multiple EMS and fire services, responded to the survey. Their responses were categorized and statistically analyzed. These responses were assumed to be the protocol followed by the EMS personnel under their medical direction.

The results are broken down into the five questions asked. Of all respondents, 63.4% of EMS systems have no maximum dosing delineated, while the remainder of the agencies stop administration at a specific dose, the most common of which is 3 mg (17.1% of EMS systems who responded).

The maximum dose ranges from 1 mg to 10 mg. For each dose, 90% of EMS systems follow ACLS recommendations and give 1 mg every 3—5 minutes.

Of those that follow ACLS recommendations, 11.1% give 1 mg every four minutes, and 16.7% give 1 mg every five minutes. Most of the responding agencies (95%) administer 1 mg at each interval, and 95% maintain a time interval within 3—5 minutes.

Of the respondents, 75% do not use epinephrine (epi) drips to administer epinephrine in their cardiac arrest protocols. Of the 25% who do use an epi drip at some point during out-of-hospital cardiac arrest (OHCA), 60% specified using the drip to correct post-ROSC hypotension.

Lastly, 78% of EMS systems who responded say they make no distinction during OHCA management whether the patient is in v fib versus any other rhythm, such as asystole or PEA.

The results show a lack of standardization in epinephrine dosing across large EMS systems around the world, in spite of the existence of standard guidelines such as the 2015 AHA CPR and ECC Guidelines.5

Dosing maximums, epinephrine drip use, dosing amount and frequency, and dosing distinction for rhythms not being more consistent across the board shows the current state of uncertainty that epinephrine administration is in at this time.

The AHA ECC Guidelines don’t specify dosing maximums or about distinguish between v fib and other rhythms.5 In those two categories, responding agencies showed a lack of standardization, leading to questions about whether a maximum dose is necessary to ensure that epinephrine does more good than harm, and whether it should only be given in certain amounts in managing certain rhythms.

For dosing interval and aliquot, most agencies surveyed follow the ACLS guidelines of 1 mg every 3—5 minutes5; however, even within that group, there’s not a clear consensus on what’s the best dosing interval or amount.

In fact, due to some studies now showing epinephrine’s controversial effects in OHCA, some agencies have switched to dosing 0.5 mg at different time intervals instead of 1 mg.

Finally, although epi drips are recommended in the ACLS manual to correct post-ROSC hypotension,5 75% of responding agencies still reported not using them.

There’s an interesting link between the initial research on epinephrine use in cardiac arrest and the current state of affairs. For one, the initial dog studies in the 1960s set the recommended epinephrine dosing and interval.3,4,6,7

It’s not changed since, nor have any interspecies comparisons or dose-to-weight corrections been made.3,4,6,7 Clinicians have continued to give the same dose to adult patients without correcting for varying body weights, and the standard 1 mg IV dosing came from observing the effectiveness of 1—3 mg intracardiac epinephrine on surgical patients in the operating theatre.11—15 There are frequent errors in epinephrine administration as well.16

Newer studies have shown that significant improvements in survival and neurologic outcomes are not necessarily correlated with higher doses of epinephrine,17 and that epinephrine administration within the first two minutes of fibrillation may be associated with decreased ROSC, survival and functional outcome.18,19

Additionally, recent observational studies post-ROSC on the detrimental effects of epinephrine given during cardiac arrest may also contribute to the lack of standardized epinephrine dosing and delivery in OHCA.20—30 (See Table 1.)

The largest of these studies even showed that although epinephrine increases the incidence of ROSC and short-term survival, it was actually associated with detrimental effects in long-term survival and functional outcome, though thorough interpretation of this study requires knowledge of specifics of prehospital care in this large system.28

The authors of that study speculated that the known documented effects of epinephrine to increase myocardial dysfunction and disturb cerebral microcirculation after cardiac arrest, and ventricular arrhythmias during the period after resuscitation, may have played a role in the findings.28

Moreover, the alpha-adrenergic effect of epinephrine–while generating improved aortic pressure and coronary perfusion–sacrifices blood flow to other organs: A “short-term gain for the heart by incurring a metabolic debt from the body and brain.”7—10

In addition, numerous adverse effects of the use of epinephrine include the stimulation of B receptors, which increases heart oxygen use as well as the incidence of arrhythmia. Platelet activation is known to be stimulated by epinephrine, causing a “prothrombotic state” that could make cardiac stress worse.7—10

The lack of consistency of epinephrine use across EMS systems is potentially quite significant. The various studies referenced here show how even a small variation in care–such as whether to give 1 mg vs. 0.5 mg, on the total of the drug that is administered, or on whether distinctions are made between rhythms–can influence survival.29

Of cardiac arrest deaths in the United States, nearly half (49.6%) occur out-of-hospital,31 and the lack of standardization in OHCA care due to conflicting or controversial evidence presents a challenge in the management of these patients.

We must also consider the challenges EMS system medical directors face when trying to translate conflictive evidence into clinical guidelines to standardize practice in their communities.

The inconsistent protocols across major EMS systems, previous controversial studies and the potential impact on patient care further call into question epinephrine’s net impact on patients and EMS care. The significant differences shown between ACLS recommendations and current practices reveal the effect of a lack of clear evidence or difficulty translating evidence into practice.

Protocol reversals happen more often when researchers are willing to conduct largescale trials to test evidence against the status quo, and medical practices are then replaced by practices that may better withstand scientific scrutiny.32 This has already been shown by the research that has led to decreases in out-of-hospital and ED deaths in acute coronary syndrome.33

Large-scale, randomized studies in the administration of epinephrine during cardiac arrest to clarify the science in the matter are called for. Careful attention to the quality of CPR processes during such studies would be required for reliable answer to the questions. Further biochemical studies can show what happens at the molecular and systemic levels in the short and long term.

Taken together, these next steps will help ensure that management practices for cardiac arrest are giving patients the best outcome possible. 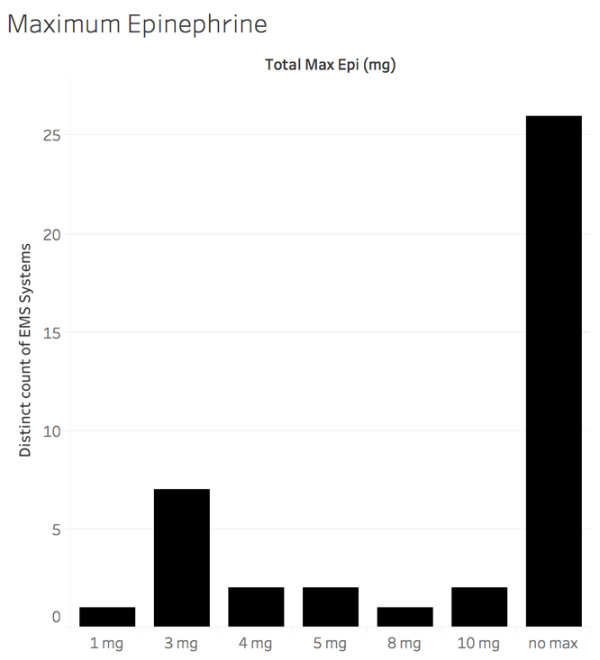 Figure 2: The epinephrine amount given per dose, and the interval at which each dose is given 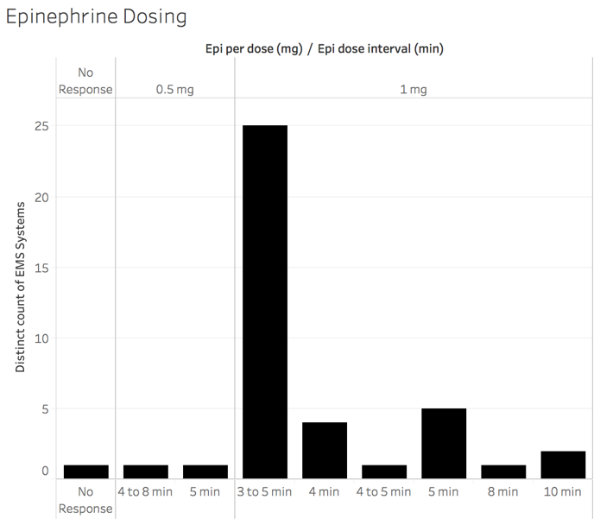 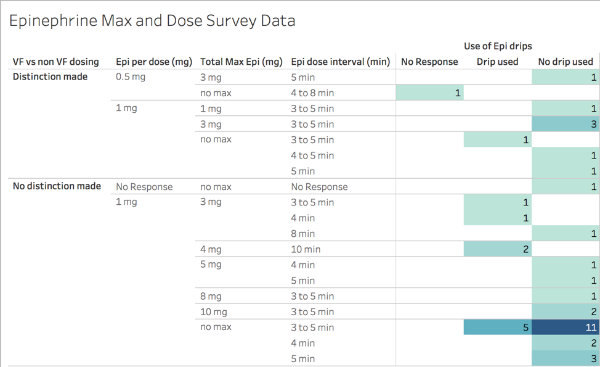 Figure 4: Data organized by the maximum epinephrine administered, and what dose amount and interval were used for each maximum 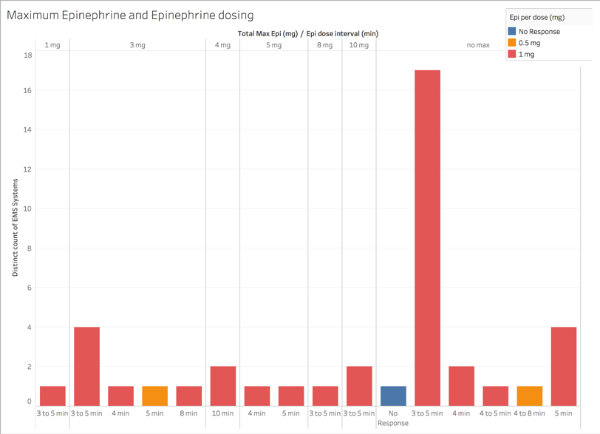 Figure 5: For whether a distinction is made between rhythms or not, the breakdown is given for how much epinephrine is delivered in each dose and what the total maximum given is. 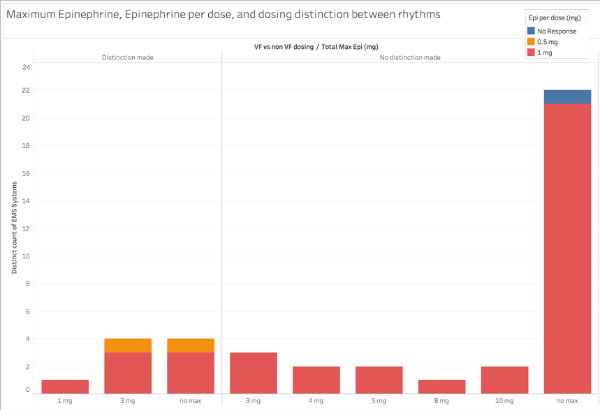