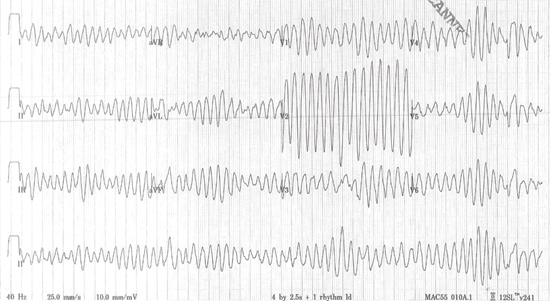 A 19-year-old male is a known heroin abuser to his friends and family, and after much encouragement he successfully completes rehab and comes home. In honor of his return, his friends invite him to a house party to celebrate. Initially, the night is going well, but soon his friends become concerned when no one can find him.

Someone mentions that he left about an hour ago to “get something from his car.” His friends go outside to investigate, and find him slumped over in the back seat. He appears blue and is cold to the touch. There’s drug paraphernalia next to him. Someone at the house party calls 9-1-1 in response to their screams for help. A friend sees a police car driving by and starts screaming and jumping up and down for help.

Meanwhile at Rescue 1, the dual paramedic crew is catching up on charts from the busy shift the night before. The tones suddenly activate for an “unresponsive male, possible overdose.” The crew recognizes the address-they were there two weeks ago and had talked to a teenage male about entering rehab after waking him up with Narcan (naloxone). The address is less than five minutes from the station. The crew calls en route.

Back at the scene, the police officer exits his cruiser and immediately realizes something is seriously wrong. He pushes past the obviously excited and upset friends and sees the teenager slumped in the back seat, cyanotic and unresponsive. The officer opens the patient’s airway and checks for a pulse.

There’s no pulse, no breathing and he’s cold to the touch. With the help of bystanders, the officer pulls the teenager onto the ground. He instructs them how to do chest compressions and runs to the cruiser to grab an AED from the trunk.

He radios dispatch, “Cardiac arrest with CPR in progress. Have EMS expedite.” He returns to the patient’s side and attaches the AED, but there’s “no shock advised” so he continues CPR.

Rescue 1 pulls up a few minutes later and the crew radios for a second crew. The first medic takes control of the airway and starts to ventilate with a bag-valve mask (BVM) as the police officer continues compressions, and the second medic attaches the monitor.

The initial rhythm displayed on the monitor is asystole. As CPR continues, the patient’s airway is suctioned of thickly pooled oral secretions and he’s intubated without difficulty. An intraosseous line and an external jugular peripheral line are placed for access. Epinephrine is administered 1 mg 1:10,000 IV. Given that it’s a suspected overdose with a possible toxidrome, 1 gram of calcium chloride and 150 mEq of sodium bicarbonate are also given.

On rhythm recheck, the patient is in v fib. He’s subsequently defibrillated at 200 joules using a biphasic defibrillator. There’s a brief return of spontaneous circulation (ROSC) with sinus tachycardia, but it quickly decompensates back to v fib. CPR continues, 300 mg of amiodarone is administered and the patient is again defibrillated at 200 joules. He’s converted back to sinus rhythm with pulses. An amiodarone drip is initiated.

While obtaining a 12-lead ECG post ROSC, the patient’s rhythm again decompensates, this time to torsades de pointes. (See Figure 1 above.) He’s defibrillated again, this time at 360 joules. Two grams of magnesium is administered via IV. There’s a brief ROSC again, to a sinus tachycardia, but the rhythm quickly deteriorates back to v fib. CPR is reinitiated. Lidocaine 100 mg and epinephrine 1 mg are given. The patient is defibrillated an additional three times at 360 joules, this time with no cardioversion.

Given that the patient is young, and all other avenues have been exhausted, the crew notifies medical control and requests permission to attempt double sequential defibrillation. The order is approved. Additional help has arrived at this point, and a second defibrillator is taken from the backup ambulance. The second monitor is attached to the patient, this time with the defibrillation pads placed in anterior-posterior positioning (the first set had been placed in standard apex-sternum orientation). (See Figure 2.) Both defibrillators are simultaneously charged to 360 joules. On the count of three, the medics simultaneously deliver shocks from both defibrillator units. 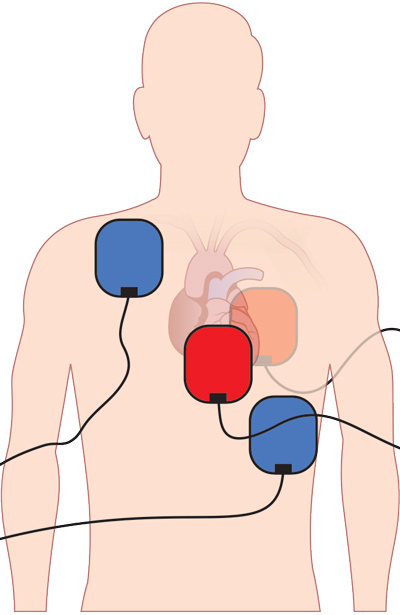 In the hospital, a bedside ultrasound by the emergency physician shows grossly reduced cardiac wall motion globally. A post-resuscitation chest X-ray shows no significant lung injury nor evidence of pneumothorax. The patient has a very labile blood pressure and episodes of sinus bradycardia after ROSC, which are corrected with a norepinephrine drip and an epinephrine drip. He’s transferred to the ICU.

Post-resuscitation hypothermia protocol is initiated. After 48 hours of care, a head CT shows marked cerebral edema. A bedside apnea test demonstrates no evidence of spontaneous respirations after 10 minutes. A Tc-99m brain death (or intracerebral perfusion) scan is performed, and indicates no cerebral radionucleotide uptake. The patient is declared brain dead by neurology.

The family decides to participate in the Gift of Life program, and the patient’s heart, lungs, pancreas, liver and kidneys are harvested for others in need.

The concept of double sequential defibrillation shocks was initially described in animal literature in a mid-1980s article presented in the Journal of American Cardiology. Using a canine model, investigators delivered single, double and triple exponential shocks to hearts in which v fib and myocardial infarction had been induced. The shocks were delivered one second apart and employed different vectors (i.e., pathways) across the heart. The researchers determined that “two sequential shocks over different pathways reduce both total energy and peak voltage required to terminate ventricular fibrillation.”1 Thus, both sequential shocks and multiple vectors help to reduce the v fib threshold and therefore terminate the arrhythmia.

The first mention of double sequential defibrillation in human cardiology literature was from electrophysiology teams at Yale-New Haven Hospital (Conn.) and St. Francis Hospital (N.Y.). During routine electrophysiologic testing of nearly 3,000 patients over a three-year period, five male patients experienced recurrent ventricular dysrhythmias, predominantly v fib. These patients were undergoing standard programmed electrical stimulation, or having implantable defibrillator placement. The patients received between seven and 20 defibrillation shocks at 200 to 360 joules prior to double sequential defibrillation being employed. The double sequential technique worked during the first attempt in each patient. The shocks were delivered between 0.5 and 4.5 seconds apart. They used the anterior-posterior and apex-sternum orientations to deliver the shocks. No pharmacological agents were administered between the unsuccessful single defibrillation attempts and the successful double-sequential conversion.2

The teams theorized that the double-sequential shocks reduced the v fib threshold, may override the relative refractory period of cardiac muscle, or possibly decrease transthoracic impedance, leading to a more effective electrical delivery. They also felt that the change in vectors played a factor, effectively using the first shock to “set up” for the subsequent shock. They concluded their article with the statement, “This technique may have general applicability to the emergency room setting, providing a simple and potentially lifesaving approach to refractory ventricular fibrillation.”2

More recently, there was a retrospective case series published in Prehospital Emergency Care from a high-volume urban/suburban EMS system. Over a two-year period, 10 patients were treated with double sequential defibrillation for refractory v fib. This was defined as v fib that persisted “following at least five unsuccessful single shocks, epinephrine administration, and a dose of antiarrhythmic medication.” Seven patients had successful cardioversion, and three had ROSC. None, however, survived to hospital discharge.3

Double sequential defibrillation is currently being employed in a number of EMS systems across the United States, including Wake County, N.C.; Fort Worth, Texas; and New Orleans. Even though there isn’t a large body of literature surrounding this technique, it’s been demonstrated successful in the electrophysiology lab, ED and prehospital settings.

Since access to procainamide-another treatment for refractory v fib-is limited, this may be the only available option when faced with a patient who’s failed standard ACLS defibrillation and medication administration. It’s an intervention that has little chance to do harm, and it may represent the “hail Mary” pass to a successful ROSC touchdown.