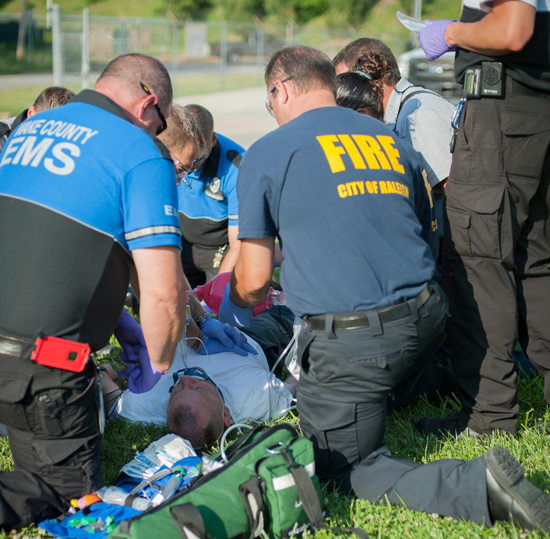 On a hot summer afternoon in Raleigh, N.C., paramedics from the Wake County EMS System (WCEMSS) respond to a middle-aged man lying pulseless and apneic next to his truck on the shoulder of an interstate.

The Raleigh Fire Department personnel who were first on scene had witnessed the patient suffer cardiac arrest after vomiting his sports drink. They initiated CPR and shocked the patient twice with an automated external defibrillator (AED) prior to EMS arrival.

Paramedics place the patient on a cardiac monitor and observe ventricular fibrillation, prompting a third shock and continued CPR. EMS and first responders work as a team to provide aggressive resuscitation in an effort to save the man’s life.

The providers also use an impedance threshold device (ITD) with a timing light to guard against detrimental hyperventilation. The code commander ensures the patient receives continuous compressions and timely defibrillations with minimal pauses.

As the resuscitation progresses, paramedics shock the patient multiple times in an unsuccessful effort to break his ventricular fibrillation. In cases of refractory v fib, WCEMSS utilizes double sequential external defibrillation, the delivery of near-simultaneous shocks from two cardiac monitors connected to two sets of pads placed on the patient.

WCEMSS personnel administer three such double sequential shocks to no avail: the man still lies unresponsive on a backboard, the lethal arrhythmia displayed on both monitors. The patient has been in arrest for nearly 30 minutes, 25 of which have been with ACLS care underway.

Amongst other criteria, one standard requirement is that 25 minutes of ACLS care be provided to the patient before ceasing efforts.1,2 Paramedics often elect to continue resuscitation beyond 25 minutes when confronted with persistent v fib, narrow-complex pulseless electrical activity of normal rate, high or normal end-tidal carbon dioxide (EtCO2) measurements, and various other factors that can give providers reason to believe that their patient maintains viability.

A question that remains, however, is whether patients who endure such prolonged resuscitations stand any realistic chance of neurologically intact survival (NIS), the ability to live and function independently following cardiac arrest.

NIS can be more strictly defined as comprising patients who are discharged from the hospital with a cerebral performance category (CPC) score of 1 or 2, where 1 indicates mild or no cerebral disability and 2 indicates moderate disability.

CPC 2 patients are able to care for themselves and work despite their moderate cerebral impairment; CPCs 1 and 2 are thus both categorized as “good” neurological outcomes.

It’s reasonable to consider whether protracted time in cardiac arrest–even in the presence of refractory v fib, as exhibited by the man who coded beside the highway–is predictive of poor neurological outcomes ranging from severe cerebral disability to brain death.

No provider wants to resuscitate a patient only to have him remain comatose for the rest of his life. In lengthy codes, then, is there a point at which cardiovascular survival may still be achievable, but the potential for quality of life is so low that further efforts should be considered neurologically futile?

Examination of the last decade’s trends in out-of-hospital cardiac arrest management provides context for the discussion of neurological survivability. Prior to 2005, WCEMSS ran codes according to the standard of care at the time. Providers who practiced in that era will likely recall the former approach of 15:2 compression-to-ventilation ratios, stacked shocks, early intubation, IV access, administration of two rounds of drugs, load the patient and go to the hospital.

Defibrillation, intubation and diesel therapy were the primary focus. Paramedics simply didn’t work codes on scene. It seemed intuitive that the soundest course of action was to initiate treatment in the field and rush the victim to the closest ED in hopes of beating the clock; cardiac arrest patients need doctors, and paramedics aren’t doctors, as the thinking went.

EMS professionals and their medical directors have since come to realize that routinely transporting patients who are in cardiac arrest is bad for patients and risky for providers.

High-quality compressions, now known as vital to neurologically intact survival, are difficult to achieve in a moving ambulance. And crews working unrestrained in the patient compartment is dangerous, especially when the driver has that “I’ve got a dying man in the back of my truck and we need a doctor now!” thought process.

Awareness of the problems with the load-and-go strategy for codes led to the “work them where you find them” approach. With the growing consensus that nontraumatic cardiac arrest patients stand their best chance of survival when worked on scene, the next step was to determine whether the other code management strategies in place at the time were effective in achieving resuscitation.

The New Era of Resuscitation

The final phase of implementation introduced induced hypothermia by EMS following return of spontaneous circulation; WCEMSS has since been initiating hypothermia during the intra-arrest period as well.

The results of these modifications were astounding. Overall survival to hospital discharge during the full implementation phase nearly tripled from baseline and critically, neurologically intact survival remained essentially the same: roughly three quarters of discharged patients had CPCs of 1 or 2.3

WCEMSS demonstrated that these changes to cardiac arrest procedures have a net positive effect on survival rates and greatly increase the absolute number of neurologically favorable outcomes. Had the new approach instead caused a significant climb in the rate of survivors with devastating brain damage, however, the implementations would certainly have been viewed as a failure.

Healthcare professionals generally agree that a person’s quality of life is at least as important as his mere ability to sustain a pulse, and it’s in this context that the questions of resuscitation termination versus prolongation become pertinent.

With the new and effective approach of on-scene resuscitation prior to transport, how long should paramedics continue their efforts and still expect the patient who survives to have a good quality of life? Do lengthy resuscitations contribute to significantly greater rates of comatose and severely disabled survivors?

To answer these questions, WCEMSS collaborated with WakeMed Health and Hospitals and SAS Institute to conduct a retrospective study of out-of-hospital cardiac arrests in the Wake County EMS System from 2005 through 2012. One of the objectives of the study was to examine the relationship between the duration of resuscitation and neurologically intact survival.

No Drawbacks to Extended Efforts

Not surprisingly, the results showed that the longer patients had to be resuscitated, the less likely they were to survive to hospital discharge. Of those patients who did survive prolonged resuscitations, however, many were neurologically intact: The study found that nearly 70% of survivors who were in arrest longer than 40 minutes from the time of dispatch were discharged from the hospital with a CPC of 1 or 2. This rate of neurologically intact survival, in fact, approached the NIS rate for all survivors–83%.4

These data demonstrate that meaningful neurological outcomes are not only possible, but in fact probable, in patients who survive cardiac arrest after extended resuscitations. The evidence from this study does not support the concern that those who survive prolonged cardiac arrest will more than likely suffer severe neurological impairment.

Put in real-world terms, the research implications are dramatic. Over the seven years studied in Wake County, if providers had strictly limited their efforts to 25 minutes from the time they were dispatched, approximately 100 neurologically intact survivors would have had their resuscitations prematurely abandoned.

The longest duration of arrest that resulted in a patient’s neurologically intact survival was 73 minutes, a case that illustrates the potential for favorable outcomes in codes worked well beyond the standard 25-minute futility mark.

It must be acknowledged that in many cases, 25 minutes of ACLS care is sufficient to determine futility. The victim who has sustained asystole for this duration despite aggressive intervention provides a clear example of someone unlikely to benefit from continued efforts.

In light of WCEMSS’s research, however, EMS providers shouldn’t necessarily feel compelled to cease resuscitation if there remain signs of viability, such as good EtCO2 or a persistent shockable rhythm.

Further studies will hopefully elucidate which factors predict survivability from prolonged arrest. Until then, paramedics should apply their clinical judgment when considering whether to continue resuscitation beyond 25 minutes.

WCEMSS paramedics continue their attempts to revive the man who collapsed on the side of the road. The team maintains continuous compressions, controlled ventilations and cold fluid infusion, while hanging a procainamide drip and administering additional defibrillations. After 40 minutes of resuscitative efforts and more than a dozen shocks, the patient’s v fib finally breaks, his heart resuming a sinus rhythm, and providers note strong femoral and radial pulses.

Following return of spontaneous circulation, the responding crews remain on scene for 10 minutes to prepare the patient for transport and monitor him closely for re-arrest. He begins to exhibit spontaneous respirations and movement, though remains unresponsive to commands.

The paramedics transport the patient to the ED, where doctors continue EMS-initiated therapeutic hypothermia. The man ultimately receives a cardioverter-defibrillator and is discharged to home neurologically intact.

Cases such as this demonstrate the ability to achieve good neurological outcomes despite extended resuscitative efforts. WCEMSS data indicate that a significant majority of the survivors of lengthy codes are subsequently able to live and function independently.

Providers should continue their efforts undaunted for cardiac arrest patients who don’t meet termination criteria or who show other signs of viability after 25 minutes of resuscitation. Though overall survival from prolonged arrest is poor, those who reach hospital discharge are likely to enjoy a meaningful quality of life.