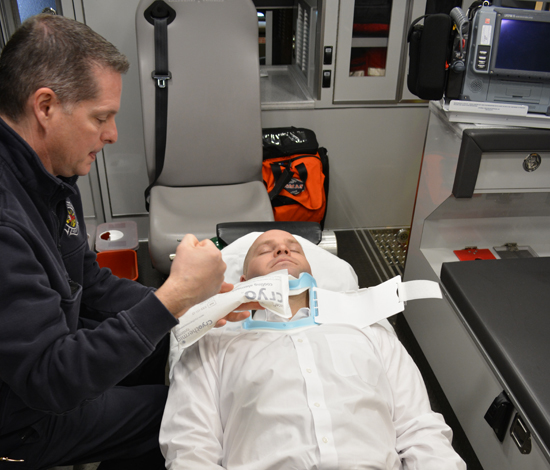 You arrive at the scene of a country farmhouse 35 miles from the nearest community hospital.

As the ALS provider, you’ve been running through your treatment plan since you received the dispatch call seven minutes ago: “55-year-old male in cardiac arrest. CPR initiated by family.”

The medical first responder on scene continues compressions as you apply the monitor and your partner establishes IV access. The first dose of epinephrine is given followed by two minutes of CPR and a brief pause. “V fib. Clear! Shock! Continue CPR!”

Two minutes later you’ve established a definitive airway and end-tidal carbon dioxide spikes to 50 mmHg; your pause for a rhythm check demonstrates sinus tachycardia and the carotid pulse is palpable.

You move the patient to the stretcher, lift, load and go.

Your transport time is at least 30 minutes. You continue to ventilate. A 12-lead ECG shows no signs of STEMI, blood pressure has stabilized, and yet you still have no sign of responsiveness. Now what? What more can you do to potentially improve the eventual outcome for your patient?

Targeted temperature management (TTM), formally known as “therapeutic hypothermia,” has become the standard of care for most post-cardiac arrest patients who don’t have a purposeful response to commands after return of spontaneous circulation (ROSC). Evidence supports TTM’s value in the role of neurologic protection after cardiac arrest, increasing the potential for a good neurologic outcome.

Over the past decade, further effort has gone toward seeking answers to the ideal specifics of the cooling process: who should be cooled, when do you cool, what temperature is best and for how long? In the prehospital setting, additional questions arise: Is it feasible and safe to initiate TTM in the field? What’s the best method? Who should be cooled and for whom is it contraindicated? Does the timing of its initiation matter? Is earlier really better?

Not all questions have answers, but the updated 2015 American Heart Association (AHA) Guidelines for CPR and Emergency Cardiovascular Care (ECC) have a few recommendations on TTM.

Additionally, the Canadian guidelines for use of TTM after cardiac arrest were published in Resuscitation.

Let’s review these recent reports and updates with a focus on the less-understood aspect of cardiac arrest care: “cooling” the victim after ROSC.

In the 2015 AHA update, the temperature range for TTM has widened, the duration has potentially extended, and the application has expanded from primarily v fib arrests to all arrest etiologies.

The target temperature expansion needs some explanation. Prior to the 2015 update, 32—34 degrees C was accepted as the target and the treatment was referred to as “therapeutic hypothermia.” Then a recent study extended the tight temperature interval: when 33 degrees C was compared to 36 degrees C, outcomes were similar.3

The authors noted that in previous trials patients became hyperthermic, which suggested the benefit may come from temperature control in a manner that prevents hyperthermia. However, the subjects enrolled in this study were different than other trials. The subjects had a very short time to CPR (one minute), were mostly v fib arrests, the greater majority had pupillary and corneal reflexes, and a high percentage of them were patients with ST elevation myocardial infarction.

This trial, considered the best conducted to date, was the evidence needed to be incorporated into the Guidelines. Additionally, previous guidelines limited recommendations for cooling to v fib arrests.

Both the AHA and Canadian guidelines clearly remove this limitation: Cooling is a recommended therapy for all post-cardiac arrest patients of essentially any etiology. Although less clear than other recommendations, most of the laboratory evidence shows that early initiation of cooling will likely have more benefit than delayed cooling. No studies have specifically addressed the timing factor alone, but it has led to a surge of interest in the earliest practical initiation: prehospital TTM.

Prehospital cooling methods are based on the assumption by many medical providers and researchers that if cooling a post-cardiac arrest patient is good, then cooling them more quickly is probably better.

It’s also assumed that prehospital initiation of cooling will encourage the continuation within the hospital setting, as indicated by the strong recommendation from the Canadian TTM guidelines.

Protocols have been developed in numerous systems to provide prehospital cooling by whatever means available to each system. For many, the most cost-effective and simple means of initiating cooling procedures is to keep cold normal saline bags available to administer after ROSC.

A 2014 study published in the Journal of the American Medical Association ( JAMA) offered new perspective. When 4 degrees C IV fluids were administered (2 L) to ROSC patients and compared with in-hospital initiation of cooling, those who received the cold saline fluids had higher incidence of early pulmonary edema and higher re-arrest rates–although overall survival was unchanged.4

It’s the recognition of these complications that has led to the AHA recommendation against large cold IV saline boluses as a means of cooling.

It’s unclear whether it’s the temperature or amount of cold IV fluids that caused the complications in the JAMA study. Although when one considers that cardiac function is impaired post-arrest, the increase in pulmonary edema is likely due to the volume of fluid. So, if cold IV saline boluses are considered to be potentially deleterious, what means do prehospital providers have for initiation of targeted temperature management?

The simplest in concept is any method of surface cooling. Blood flow to the skin is significant, and although it will decrease when cooling techniques are applied to the peripheral vasculature, there’s still a significant effect from the application of ice bags, cold packs, cold bath or other cooling means directly to the patient’s body surface, typically to the neck, axilla and groin. This is the least invasive approach, and it will avoid the concerns raised in the JAMA study on the administration of cold IV saline.

Surface cooling isn’t as simple logistically, however. Standard cold ice or traditional gel packs need to be kept cold, and accessed when the appropriate patient is encountered. If kept on the ambulance at all times, space may be an issue. If kept at an ambulance base or hospital, access in a timely manner may be difficult. Set-up and use of cooling machines on an ambulance may also be cumbersome or time-consuming–time better spent with patient care and transport.

Some companies have developed chemical packs that generate very cold temperatures when activated. Some have even been fashioned into collars with integrated cryo chemical cooling packs that can be stored at room temperature and used when necessary to apply targeted cooling to the neck.

These collars and cryo packs may be an economical, less cumbersome and less time-consuming solution. The logic for the use of cooling collars is centered on the goal of neurologic preservation: Cool the brain to save the brain.

One concern with surface cooling is the amount of time it can take to achieve the target core temperature; however, this approach offers an early cooling “bridge” to TTM devices and processes in the hospital.

Transnasal cooling, a newer concept, is a slightly more invasive approach to direct cooling of the brain. A 2010 study released in Circulation detailed the use of a transnasal cooling device in the prehospital setting, finding it to be “safe and feasible,” as well as “associated with a significant improvement in the time intervals required to cool patients.”5

Use of the device described involves placement of a nasal catheter in the patient and attaching it to a control unit that then administers oxygen and a cooling mixture directly into the nasal cavity that rapidly evaporates and doesn’t introduce a significant amount of fluid into the airway/trachea.

This device was deemed safe and effective for the initiation of prehospital cooling, but some EMS agencies may be limited by cost of these units.

Regardless of your system’s size, geography, call volume or structure, your patients will likely benefit from post-cardiac arrest TTM.

Recent guideline updates in the U.S. and Canada emphasize the importance of TTM as a means of improving neurologic outcomes in cardiac arrest victims.

The safest and most effective method of prehospital TTM is a question not yet answered, but evidence does support the safety and efficacy of prehospital cooling by surface and transnasal methods.

Although cost, feasibility and availability of specific cooling methods must be considered, evidence strongly supports that any unresponsive adult ROSC patient should be considered for TTM.

Systems must now consider how to provide the best care to patients given this evidence and the current recommendations. Protocol development should address both the best management of cardiac arrest as well as the best care after ROSC, aiming for the highest goal of good neurologic outcomes. Continuous case review with quality improvement initiatives and continued research will provide further insight and guidance for the future practices of all prehospital providers.