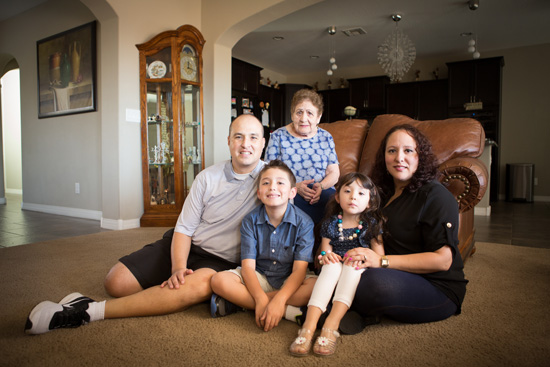 At around 7:30 p.m. on Friday, Oct. 4, 2013, Jose Garcia sat in a recliner in the living room of his Goodyear, Ariz., home. He was editing video he had filmed at a high school football game that afternoon for his job with the Arizona Interscholastic Association. Jose’s wife, mother-in-law and another family member were talking in the kitchen. His two children, ages 1 and 5, were playing in another room. He was 40 years old.

“I don’t remember anything other than being on the recliner working on the video project,” Jose says.

“He called out my name and “¦ it was just a different tone,” recalls Gina, Jose’s wife. “Like a scary, eerie tone. I went over to him and he started losing color to his face. I could tell he wasn’t breathing. I called out to my sister-in-law and said “˜Grab the phone and call 911.'”

Gina, a police detective, had attended many CPR training sessions, both through work and at classes taught by her brother, a firefighter with the Goodyear Fire Department (GFD). But she’d never performed CPR on a real person.

“It was pretty hard because it was my husband. I know how to do CPR, but it didn’t click in yet, I was just busy trying to see what was going on with him,” Gina recalls. “I got on the phone and I explained to them that my husband’s not responding. He was losing color and turning purple.”

Andrew Mendenhall, the 911 telecommunicator, helped Gina focus and told her he would guide her through the steps of CPR.

“He started telling me and then it started clicking,” Gina says. “He really kept me calm. I know that I have the training “¦ but what he did was very important.”

With Andrew’s help, Gina started pushing hard and fast on Jose’s chest. When firefighters arrived–a crew that knew Gina and Jose and had visited their home on more festive occasions–Gina felt relieved. And overwhelmed.

“I broke down and started crying.”

Another engine company and a Southwest Ambulance unit arrived, and the crews worked together to revive Jose. After the third shock, Jose had a pulse but remained unconscious.

“Those guys are my angels,” Jose says of the responders, Mendenhall, and his wife. He keeps the names of the personnel from Engine 183, Engine 185 and Southwest Ambulance 181 in his wallet.

Life as a Survivor

Jose was kept in a coma in the hospital while his body was cooled. He woke up a few days later. That’s when his recovery began–rehab, an implanted defibrillator and testing. Several months later, doctors diagnosed Jose with Brugada syndrome, a genetic heart disorder that’s associated with sudden cardiac arrest. Coping with the physical effects of his arrest wasn’t the hardest part of his recovery, Jose says.

“It was more difficult psychologically. There were some anxieties, some panic attacks,” says Jose. He remembers being constantly worried he might pass out, or worse. “It was like musical chairs “¦ I would think, “˜Where’s the sofa, where’s the chair?’ just in case something happens.”

Jose and Gina met Mendenhall and the other responders who saved him at a ceremony when Goodyear city officials presented his wife with a lifesaver award.

“I knew she was a great woman when I met her,” Jose says of Gina. “And not only is she a great woman but she’s an angel as well. The same goes for the guys who saved my life as well as the dispatcher. I was just happy to see them together to thank them, because I wouldn’t be here without them.”

More on Resuscitation & Shock from JEMS.com.