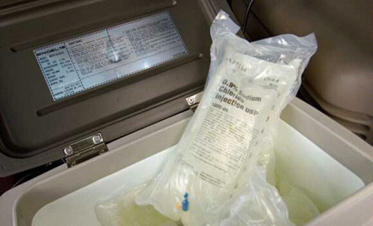 We ve all used ice packs on sprains, strains and stings to alleviate discomfort. Cryotherapy in one form or another has probably existed since early humans first encountered snow and ice. Documents from ancient Egypt report the use of medicinal cold therapy. Battlefield surgeons under Napoleon used cold to anesthetize limbs prior to amputation. Intentional systemic hypothermia or therapeutic hypothermia was first documented in modern times in 1943. Dr. Fay described human refrigeration as a treatment to slow rapidly spreading cancer cells and control pain. Since then, hypothermia has been used for patients with head injury, cardiac arrest and stroke as well as during various surgical procedures, hoping to reap protective effects for the heart and brain. However, there have been problems. Such complications as increased infection rates, dysrrhythmias and acid-base imbalance have produced a roller coaster ride over the years for therapeutic hypothermia.

Now, at least for certain cardiac arrest survivors, we might be on an upward trend. In 2002, the ALS Task Force of the International Liaison Committee on Resuscitation (ILCOR) published an advisory statement on therapeutic hypothermia after cardiac arrest:

The basis for this advisory is two prospective randomized trials published in 2002, one in Europe and one in Australia (we are all part of the international medical community) that show significant improvement in out-of-hospital post-resuscitation neurological function when compared to normothermic patients. Mild hypothermia (32-34_ C) induced after arrival at the receiving hospital, appears to have balanced a positive outcome with acceptable complications.

Cardiac arrest results in a lack of oxygen and nutrient delivery to the cells. Adequate energy is not produced thus cell integrity and function is lost. This induces a series of reactions that lead to cell damage or death. More lactate production causes increased acid levels; elevated levels of excitotoxins are present to over stimulate brain cells (neurons) and there is increased activity of enzymes that break down the various cellular components. This is bad enough; then we come along and produce a return of spontaneous circulation and potentially cause further injury during reperfusion! The renewed blood flow will help remove waste products such as lactate; and the oxygen and nutrients will renew energy production. However, the oxygen may also react with other atoms or groups of atoms (molecules) to increase the number of free radicals. Free radicals have an extra electron that allows them to damage cellular components, potentially causing cell death. Kill enough cells, kill the organ, kill the right organ, kill the organism.

Mild hypothermia appears to reduce the number of adverse reactions that occur after reperfusion. It reduces cellular energy requirements and less oxygen is necessary thus decreasing the formation of free radicals. Important emphasis: mild hypothermia. The complications and problems experienced with hypothermia, intentional or unintentional, increase with decreasing temperature.

If mild hypothermia is good, is mild hyperthermia bad? That would be a Yes! Where hypothermia decreases energy requirements, enzyme function and free radical production, hyperthermia increases these activities in ischemic cells. Hyperthermia should be prevented. Prevention requires the inclusion of body temperature as a routine vital sign for the patient with an ischemic brain injury from any cause.

Initiating hypothermia in the field requires a system approach. Protocol development should involve local EMS, the physician medical director (medical oversight) and the receiving facilities. Considerations include method of cooling, prevention of shivering, temperature monitoring, and evaluation of the process and patient outcomes.