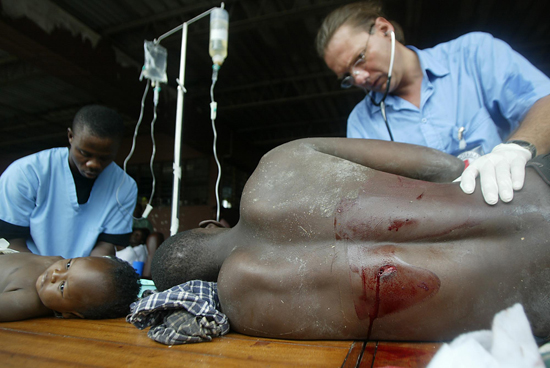 This clinical review feature article is presented in conjunction with the Department of Emergency Medicine Education at the University of Texas Southwestern Medical Center, Dallas.

After another uneventful shift change, the quiet morning is interrupted when the alarm sounds and dispatch sends multiple fire and medical units to a reported explosion in a residential neighborhood. En route to the scene, you see the thick, black smoke rising above the rooftops, as police already on scene report over the radio two major structure fires and several injuries.

The scene plays out before you, as fire crews, battle two adjacent house fires. The casualties include two police officers who had been approaching the house just before the explosion occurred and at least half a dozen children who had been waiting for the school bus on the sidewalk. Apparently, the despondent homeowner had called 9-1-1 and reported his intent to commit suicide and destroy his house but grossly underestimated the force of the explosion that would be caused by the 12 propane tanks he detonated.

How It Happens
Explosions can occur from a variety of sources, including mishandled propane or oxygen tanks, industrial accidents and intentionally detonated terrorist devices. There are few mechanisms of injury that can compare with an explosion in terms of potential for multiple casualties with multiple sources of injury.

The term “blast injury” has become synonymous with “explosion injury.” This is an unfortunate misnomer, because an explosion comprises a multi-factorial incident that causes injury through multiple mechanisms.1 The physics that describe the effect of an explosion can be rather complex based on the type and amount of compound comprising the explosive material. Such low-order explosives as black powder or other propellants tend to transform to a gaseous state more slowly than high-order explosives, such as those found in military ordnances or commercial demolition.

The primary effect of this transformation, especially if the explosive is combined with an accelerant, is an extremely violent event resulting in the immediate transfer of large amounts of energy. This energy transfer creates a pressure pulse or shock wave that propagates outward from the detonation in a rapidly dissipating manner.2

Types of Injury
Emergency responders should be aware that although injuries following a blast may be described by several textbook mechanisms, injuries rarely occur in isolation.

Primary injury is produced solely from the pressure differences within tissues. Injuries typically occur in those areas of the body where an air-tissue interface is found (e.g., the lungs, gastrointestinal tract and ear).

Secondary injury is caused when objects displaced by the detonation strike the body. This can produce a combination of blunt and penetrating trauma.

Tertiary injury occurs when a body is physically propelled against other objects or crush injuries, such as when a body becomes entrapped in a structural collapse or vehicle.

Quaternary injury is related to the environmental factors associated with an explosion, including burns, exposures to toxic byproducts or contamination.

Quinary injury describes cases in which inexplicable hemodynamic instability occurs in patients through other explosion-related phenomena. The Department of Defense also relates this injury to the intentional inclusion of physical or biological contaminants to an intended explosive device.1

Another factor that determines lethality and predictable injury patterns is whether the explosion occurs in an open or closed space. A blast wave that’s reflected off solid surfaces may cause more serious injuries because within confined space, you have a greater propensity for ricocheting fragments, as well as partial or complete structural collapse. Additionally, lethality is also related to the location of the patients after the blast, specifically the distance between the casualty and the explosive source, as well as the presence (or absence) of any physical objects (loose or fixed) between them.3—5

Because there are so many factors to consider when dealing with explosions, no two incidents are alike. Due to their complex nature, explosion incidents don’t lend themselves to a standardized, algorithmic approach or to the ability to reliably model these events for rescuers and providers. Therefore, it’s important to keep in mind three fundamental principles when responding to an explosion event: scene safety, mass casualty preparedness and the ability to identify and treat multiple etiology injuries.

Scene Safety
Although the overall incidence of intentional bombing is low in many countries, it does occur, and it’s an unfortunate reality that the frequency of terrorist activity is increasing worldwide. And, intentionally set devices don’t necessarily require access to restricted explosive material, as evidenced by the device used to create the destructive force behind the bombing of the Alfred R. Murrah Federal Building in Oklahoma City or the May 2010 incident in Times Square, in which a vehicle-based explosive device was discovered and disarmed before it exploded.6 Intentionally set devices are designed to maximize injury and destruction in order to instill fear within society.

One worrisome tactic that’s being planned and employed with increasing frequency is an explosive event that specifically targets rescuers. This tactic may range from placing a secondary device in close proximity to a primary device that can be detonated after security and rescue personnel have arrived and initiated incident response, or a primary device can be intended for detonation after these same public safety personnel respond to a seemingly unrelated event.7 Therefore, rescue personnel should maintain a high level of suspicion when approaching the scene of any explosion.

Structural stability, proximity to combustibles and toxic substances or byproducts are all primary concerns in these incidents, especially when an explosion has occurred within the construct of an industrial accident.

Mass Casualty Incidents
Providers must be prepared to enact their MCI plan when responding to an explosion. The potential for large numbers of casualties requiring extensive medical resources may rapidly overwhelm a community’s ability to effectively respond to such an incident, unless there’s a contingency plan in place. First responders should know the procedure to activate that plan as early as possible. Proper planning allows for additional resources to be mobilized to provide supplementary on-site capability when appropriate, as well as a planned evacuation to treatment facilities.

Multiple Etiology Injuries
There’s a difference between blast injuries and those that result from the dynamics of an explosion. Blast injuries are related to the physics properties that produce rapid pressure changes. These pressure changes induce physical sheer and stress forces that are dependent on a substance’s compressibility.

As air has a greater capacity for compression than liquid or solid matter, those stress forces tend to produce tissue damage in the body locations where air is found, such as the ears, lungs and gastrointestinal tract. Injuries to these organ systems range from relatively minor (e.g., tympanic membrane rupture) to severe or life threatening (e.g., blast lung or intestinal perforation).8, 9

Because the destructive distance of propelled fragments is much greater than the destructive distance of the isolated blast wave, it would be exceedingly rare for an individual who exhibits only true blast overpressure injuries to survive such an event. The military’s experiences with exposure and close proximity to blasts indicate that tympanic membrane damage may be attenuated or prevented with hearing protection, such as earplugs.

Whether the same protection might be afforded a civilian using a device, such as an iPod with earplug inserts, is unknown. Therefore, although the presence of tympanic membrane rupture should raise a provider’s index of suspicion for more serious occult injuries, the absence of this clinical presentation doesn’t rule out significant exposure to blast overpressure.3,10,11

A unique physiological response to blast exposure within the thorax is bradycardia, hypotension and apnea.8 This phenomenon may manifest for several hours to several days and may drive rescuers to provide volume expansion through IV infusions. Providers must realize that fluid resuscitation should be done in a deliberate manner with known, measurable endpoints and only when adequate hemorrhage control has been established.

Additionally, in cases where explosive devices are intentionally set to cause harm, a common technique that increases lethality is packing or wrapping the explosive device with nails, bolts, marbles or other small items that will increase projectile injuries.

Although there’s little in terms of prehospital stabilization that’s unique to these injuries, rescuers may be overwhelmed by the sheer volume of injuries sustained by a single individual.

Something unique to explosions is the potential for embedded human remains to cause injuries after the blast. Whether from a victim in extremely close proximity or a “suicide bomber,” human bone and tissue can carry infectious disease entities that may have potential future concerns for survivors. In any case, stabilizing soft tissue injuries should be accomplished using local protocols.

Drawing on the military’s experience with prehospital hemorrhage control, the liberal and early use of appropriate tourniquets has saved numerous lives. These techniques and guidelines are directly relevant to mass-casualty and disaster situations.12—15

Without appropriate eye protection, ocular injuries are exceedingly common during explosions. Rescuers should be prepared to apply appropriate shielding devices to injured eyes (e.g., paper cups) in such a manner as not to put any pressure on the globe itself.

You may also encounter blunt trauma and trauma from structural collapse or vehicle entrapments. Traumatic brain injuries aren’t uncommon and will be more profound in a civilian population than within a military operation where soldiers are protected by padded ballistic helmets.

Patients who have an altered mental status should be treated in accordance with protocols for head injuries. However, protocols that call for intubation and positive pressure ventilation must be examined for feasibility based upon the number of presenting patients.

Additionally, care must be taken when applying positive pressure ventilation to patients exhibiting respiratory distress and frothy secretions because an underlying pulmonary injury can be worsened, or a pneumothorax may be induced in these cases.3,16

When explosions occur within confined spaces, the need for airway management increases dramatically. During two 1996 bus bombings in Israel, 42% of the casualties required airway management via intubation, compared to 7% of casualties encountered in open air incidents of the same year.16,17

Fractures and crush injuries should be splinted and treated in accordance with local protocols, noting that compartment syndrome is a significant concern. In the prehospital environment, the priority is to find and rescue the casualty and expedite evacuation to a treatment facility.

Burns from the initial fireball associated with a detonation or from secondary fires should be stabilized in accordance with local protocols. Covering the burns with clean dressings not only provides protection from additional contamination, but it also provides some measure of pain control by placing a barrier between the cool air and the injured tissue. Fluid resuscitation may be deferred until the patient is evacuated to a treatment facility that can monitor appropriate end points.

Depending on the circumstances, providers may require protective equipment to function within a contaminated environment. We should never forget the scene that played out in New York City after 9/11 as the dust and debris from the fallen towers choked the sky. When responding to a terrorist attack, you should also be prepared for the possibility of chemical or radiological contamination.18

Does your department or community have the capability to rapidly detect these types of contaminants? It would only add to the lethality of the event to transport contaminated casualties to clean facilities, exposing other patients as well as the primary-health-care teams to potentially deadly contaminants.